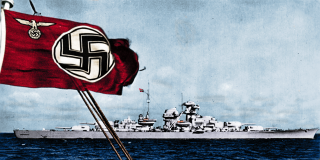 Key Point: Due to Hitler’s vindictive and wrathful nature, he was unable to recognize his own responsibility in a minor military setback, and instead lashed out at his men for following his orders all too well.

At first glance, the Battle of the Barents Sea seems insignificant, a minor World War II naval battle in which a couple of destroyers were sunk. Yet the New Year’s Eve skirmish in frozen Arctic waters convinced Hitler that he should scrap all of his capital ships and had far-reaching consequences on the leadership of Nazi Germany. The reason why points to the dilemmas inherent to being an underdog in naval warfare.

During World War I, the Imperial German Navy had disposed of dozens of massive battleships, dreadnoughts and battlecruisers—but due to their numerical inferiority vis-à-vis the British Royal Navy, almost never committed them to battle, with the notable exception of the inconclusive clash at Jutland.

In 1939 Hitler conceived of an ambitious “Plan Z” to build a large fleet to rival the British Royal Navy—one that would reach full strength in 1945, the year World War II ended. Instead, the German Kriegsmarine entered the war with around sixteen modern cruisers and battleships and twenty destroyers. The successful invasion of Norway in February 1940 cost the German Navy two light cruisers and half its destroyers, as well as many ships damaged.

Two large surface combatants—the Admiral Graf Spee and Bismarck—embarked on hit-and-run commerce raids. Like swaggering villains in a Tarantino film, the powerful warships inspired terror and wreaked havoc, but attracted too much attention to themselves and met violent, ignominious ends.

German submarines were cheaper to build and far more capable of evading detection and picking their battles than cruisers and battleships, and thus they reaped a steady and heavy toll on Allied shipping, while German battleships and cruisers mostly remained sheltered at port. But the Royal Navy still kept it guard up in the event the warships did go on the attack.

On December 22, 1942, Allied convoy JW-51B left from port in Loch Ewe, Scotland, bound for the Soviet port of Murmansk. It consisted of fifteen transport ships carrying 202 tanks, 120 warplanes, twenty-four thousand tons of fuel and fifty-four thousand additional tons of supplies—all desperately needed by the Soviet Union as it prosecuted its epic encirclement of the Sixth Army at Stalingrad. The arctic convoys were a notoriously dangerous endeavor, however.

Earlier that summer, the convoy PQ-17 was ordered to scatter when Britain’s First Sea Lord Alfred Pound grew convinced (incorrectly) that the battleship Tirpitz was on an intercept course. The lost and isolated freighters were picked off one by one by German submarines and aircraft. The loss of twenty-four out of thirty-five transports was so catastrophic, the Soviets thought the Allies were lying about how many they had sent in the first place.

JW-51B was expected to be different, however. Sailing far to north in the dead of winter, the ships would be bathed in perpetual polar night, protecting them from air attack. A close escort of six destroyers commanded by Capt. Robert Sherbrooke onboard the Onslow would guard the transports from submarine attack, supplemented by a minesweeper, two corvettes and two trawlers. As JW-51B approached the Russian harbor of Murmansk, it would be joined by two Royal Navy light cruisers of Force R, HMS Sheffield and Jamaica, which had accompanied an earlier inbound convoy.

However, JW-51B did not experience smooth sailing. A week into the voyage, gale-force winds scattered many of the ships out of formation, some of them losing their way on the stormy seas and others falling behind. Snow squalls combined with the persistent nightfall in the Arctic caused visibility to drop sharply. Five transports, a trawler and the destroyer Oribi became completely separated from the convoy. The minesweeper Bramble, equipped with an effective radar, was detached to search for the stragglers and sheepdog them back into the fold. Even the cruisers in Force R couldn’t find the convoy.

On December 30, the German submarine U-354 spotted the Allied convoy, prompting the Kriesgmarine to prepare an ambush named Operation Regenbogen (“Rainbow”). This time, the Germans would dispatch capital ships from Norway to attack the convoy: the cruiser Admiral Hipper and the pocket battleship Lützow with its eleven-inch guns, escorted by six destroyers. Grand Admiral Raeder planned a cunning trap: the Hipper and Lützow would split up in the pincer, with the former intercepting the convoy from the north. This would draw away its escorts, and cause the transports to flee southward—straight in the waiting guns of the Lützow.

However, Hitler—an infamous micromanager—could not resist personally conveying orders to the squadron’s commander, Vice Admiral Oskar Kummetz, that he should not put his valuable ships at risk. “Procedure on meeting the enemy: avoid a superior force, otherwise destroy according to tactical situation.” The German squadron promptly set sail from Altenfjord, Norway, and intercepted the Allied ships convoy roughly 120 miles north of Kirkenes, Norway.

Due to persistent snowfall, when the crew of the corvette Hyderabad spotted two ships in the distance at 8:30 a.m. on New Year’s Eve, they were unable to identify them—and assumed they were a friendly Russian ships coming to escort them. A half hour later, the destroyer Obdurate peeled off to determine the identity of the newcomers, signaling a challenge with its lamp—and received the flash of gunfire amidst the squalling snow in reply.

Captain Sherbrooke ordered the Aichen, an older A-class destroyer, to lay a smoke screen in a line to conceal the transports as they made their escape. Meanwhile, the four remaining O-class destroyers returned fire with their radar-targeted 4.7-inch guns and positioned themselves as if preparing for a torpedo run. The 1,500-ton destroyers were vastly outgunned by the sixteenth-thousand-ton Hipper and its four eight-inch twin-gun turrets. However, the British ships did have torpedoes; though notoriously difficult to deliver on target, it was not unheard of for just one or two to sink even large capital ships.

This time, the British destroyers didn’t actually launch their torpedoes, as they were likely to miss at a distance and, once expended, would leave the Hipper free to wade in and finish them off at close range. Instead, they made mock torpedo runs in attempt to persuade the Hipper’s captain to keep his distance.

The ploy worked—Kummetz, fearing torpedo attacks, backed away repeatedly from the destroyers. The low visibility reduced the effectiveness of the Hipper’s guns, but it was able to concentrate on a clear target: the Achates and its stacks boiling with smoke. The destroyer was struck several times and was ordered to disengage as it began to take on water. Shortly afterwards, a shell struck the Achates’s bridge, killing its captain and all but two of the command crew. 1st Lt. Loftus Peyton-Jones scrambled up to take control of the shattered vessel, and decided to disregard orders and continue laying the smoke screen to protect the transports even as the stricken ship listed further into the water, until it capsized at 1:15. The trawler Sea Gem rushed to the doomed ship, and managed to rescue eighty-one of the crew in a frantic rescue operation remembered by its coxswain.

The remaining destroyers kept trading shots with the Hipper until four shells battered the flagship Onslow, killing forty-seven of the crew. Shrapnel raked the bridge, bursting Captain Sherbrooke’s eyeball from its socket. The steadfast Brit continued to issue orders to his fleet until the captain of the Obdurate assumed command of the destroyer squadron and the Onslow managed to disengage.

Meanwhile, the minesweeper Bramble, still searching for convoy stragglers, bumped into the Hipper at 10:40. The little ship, confronted with a German cruiser twenty-five times its weight, tersely reported the cruiser’s location and loosed a single volleys from its four-inch deck guns before the Hipper and the destroyer Friedrich Eckoldt annihilated it in six minutes of cannon fire, leaving no survivors.

So far, however, none of the transports had been hit—and the flashes of gunfire had attracted the attention of Force R, which sailed towards the fray at maximum speed. The British light cruisers did not have heavy guns, because they had been designed in compliance with the Washington Naval Treaty; instead, they made do with triple six-inch guns on each of their four main gun turrets. Three shells struck the Hipper in rapid succession. With two cruisers bearing on him from the north and destroyers closing on him from the south, Kummetz concluded this was exactly the kind of risky situation the führer had ordered him to avoid. He laid his own smoke screen and disengaged.

In the prevailing low visibility, however, the German destroyers Richard Beitzen and Eckoldt mistook the British cruisers for the German ones, and fell into formation beside them. The gunners on the Jamaica and Sheffield did not make the same mistake. A broadside of six-inch gunfire broke the Eckoldt in two in just two minutes, causing it to sink with all hands, while the Beitzen beat a hasty escape.