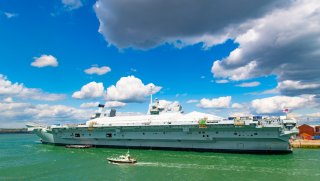 Earlier this week, the Royal Navy's flagship aircraft carrier HMS Queen Elizabeth sailed through the Suez Canal for the first time, crossing from the Mediterranean into the Red Sea as part of her maiden voyage. Images of the £3 billion vessel – affectionately dubbed 'Big Lizzie' – transiting the canal circulated online on Tuesday.

The moment was notable for multiple reasons, including the fact that the voyage is taking Queen Elizabeth and her carrier group into waters that have been the site of clandestine fighting between Iran and its proxies and Western-allied nations. The route will also take the new carrier close to China's only overseas naval base, which is located in the Horn of Africa in Djibouti.

The transit of the canal also comes just months after the crucial waterway was blocked in both directions by the ultra-large Golden-class container ship Ever Given. At 65,000 tonnes and 280 meters (920 feet) in length, the carrier is smaller than the cargo vessel – which is nearly 400 meters long (1,312 feet) – but it is still tricky business to transit the 120-mile canal.

"East of Suez" was also used as a British military and political point of discussion in reference to British interests beyond Europe. The phrase was made popular by the Rudyard Kipling poem "Mandalay," while Indian independence and the collapse of British imperial power after World War II marked the gradual draw-down of military presence "East of Suez." However, in the 21st century, the UK has made a new "tilt" towards the Indo-Pacific, and the deployment of HMS Queen Elizabeth is part of that strategy.

The entrance into the Red Sea marked the second phase of the deployment, which began on May 22 and will take the carrier into the Western Pacific via the South China Sea, USNI News reported. It also wasn't just the flagship that had to make the voyage through the Suez Canal this week.

The journey for Defender and Evertsen has already been somewhat eventful as the ships operated as part of the Sea Breeze 2021 (SB21) naval exercises in the Black Sea, and each warship was reportedly confronted by Russian vessels and aircraft.

Prior to making the transit through the Suez Canal, F-35 aircraft from the Royal Air Force (RAF) 617 Squadron, "The Dambusters" and the "Wake Island Avengers" of U.S. Marine Fighter Attack Squadron (VMFA) 211, took part in the first combat operations from the carrier – and the first aerial combat operations from a UK carrier since 2010. The sorties, which also marked the first time U.S. combat aircraft operated from a British warship since the Second World War, flew in support of U.K. anti-ISIS effort Operation Shader and U.S. Operation Inherent Resolve.

The deployment of HMS Queen Elizabeth and her carrier group marks a major milestone for the British Navy. It has been described as the single largest concentration of naval power to leave the country in a generation.

'Phase three' of the mission will see UK Carrier Strike Group head to the China-Pacific region for joint exercises with Singapore, Malaysia, Australia, and New Zealand; and that will include sailing through the South China Sea, which is sure to produce an angry backlash from Beijing.

The carrier's final destination will be in Japan and South Korea, ending a voyage of some 26,000 nautical miles that will have spanned some 40 countries.