HMS Warspite: The Battleship That Fired First on D-Day 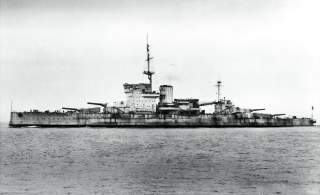 Key Point: The shells of Warspite and other Allied naval guns followed the torpedo boats back through the smoke. One of Warspite’s scored a hit and instantly sank a trawler.

To HMS Warspite went the honor of being the first ship to open fire on D-Day, with her shells pummeling a German gun battery that showed signs of life. At 5:30 AM the whole bombardment fleet roared—an awesome ripple of flame and thunder giving the occupiers of Normandy the rudest of awakenings.

Lunging out of a smokescreen laid by Allied vessels to protect their seaward flank off Sword Beach—the primary landing point for British forces on the eastern flank of the 50-mile long invasion front—were three German torpedo boats from Le Havre. Even though shocked and awed by the array of Allied firepower in front of them, the Germans nevertheless launched 17 torpedoes.

The British warships reacted on seeing splashes from the tinfish as they went in the water, Warspite raining every caliber of shell possible down on the enemy craft.

The torpedo boats turned around and made a speedy retreat back through the smokescreen, passing three of their own armed trawlers coming out to have a go.

The shells of Warspite and other Allied naval guns followed the torpedo boats back through the smoke. One of Warspite’s scored a hit and instantly sank a trawler.

In the meantime the German torpedoes claimed a Norwegian destroyer, HNoMS Svenner, but otherwise found no victims. One of the tinfish passed harmlessly between Warspite and battleship Ramillies. The old battlewagons had survived the only naval surface action of D-Day.

Throughout the day Warspite conducted fire missions, often without the benefit of an observation aircraft or forward observer with the troops. She pounded enemy infantry and vehicle concentrations, a command headquarters and also gun emplacements.

Not long after Warspite’s guns had announced the seaborne part of the invasion of Europe, overhead flew the second wave of gliders carrying soldiers of the British 6th Airborne Division.

“All personnel not on full action stations can come up on deck to witness a sight you will never see again in your lifetime,” the Spite’s commanding officer Capt. M. H. A. Kelsey told his crew.

Petty Officer Charles Pearson was one of those able to take advantage of the invitation. “At that moment there was a lull in the shelling and we came out the turret to see what was happening,” Pearson recalled. “Around us other ships were still firing—the Ramillies banging away with her own 15-inch guns, the rocket ships letting rip.”

“Then we saw the gliders coming over, heard the captain’s broadcast and saw the aircraft doing the V for Victory formation,” Pearson added. “It was fantastic, so much noise. It was awesome. Sadly we saw some of the gliders shot down and falling into the sea. A little while later the bodies of the dead paratroopers and wreckage of the planes floated by. It was a bit upsetting.”

And so the great invasion unfolded, with German counter-fire from shore batteries sometimes coming close enough to scythe Warspite’s upper works with shrapnel, but no real damage was caused.

Albert Cock who had been a telegraphist in Warspite during her Mediterranean battles earlier in the war, was now a chief petty officer serving on a minesweeper nearby. “We were fired upon by shore batteries and also bombed by German and American aircraft,” Cock said.

“We were cutting the mines free and destroying them by gunfire. We hit one mine, which caused us serious damage but didn’t sink us. I knew the Warspite was there but we never made visual contact with her although we could hear the big guns banging away all day.”

Other ex-members of Warspite’s crew were heavily embroiled in fighting ashore. They were Royal Marines who had served aboard her out in the Far East before gaining entry to the commando forces. At least three of them died either during the landings or in the subsequent fighting in the Normandy beachhead.

Late on the evening of D-Day, Warspite pulled back from Sword sector and dropped anchor a few miles offshore. The following day the battleship fired against likely enemy troop, vehicle and gun positions. Enemy bunkers also received attention from her guns. Bit by bit the Nazi grip on Normandy was loosening.

Having fired more than 300 shells in just two days, Warspite’s magazines were exhausted, so she retired across the Channel to Portsmouth to load up with more ammunition.

When she returned on June 9, she was ordered to support the American beaches, especially Omaha where troops were hard pressed. Warspite’s assistance was badly needed as the U.S. Navy’s bombardment vessels, including the battleship USS Arkansas, were running short of shells.

Between 4:12 PM and 6:25 PM, 96 rounds of 15-inch were fired, again without the aid of aircraft spotters or forward observers. Warspitedevastated a key enemy artillery position. She was highly praised in a signal from American commanders.

Two days later Warspite was off Gold Beach, where British troops had gone ashore. This time the battleship helped save the 50th Division from a formidable counter-attack by destroying German troops and tanks assembling for the assault in a wood. “Fifty rounds 15-inch rapid fire,” Kelsey commanded.

Midshipman Andy Hamnett’s baptism of fire had been the incredible blast of the Warspite’s own guns on D-Day and since then he had learned to ignore danger.

“Once we reached Normandy I slept on the deck and was fed enormous quantities of pasties, or oggies as they were called,” Hamnett recalled. “As my action station was near a 15-inch gun turret the noise was enormous. My principal task was running messages for the commander [Warspite’s second-in-command], whose name I forget.”

“Another task was to drive one of the ship’s motorboats around the fleet, taking bread from our bakery to the smaller vessels and also landing war correspondents from our ship to Port-en-Bessin. I cannot remember being particularly frightened, but no doubt I took my example from the older men around me.”

Today we can take our example from those elderly veterans, who soldier on despite being frail, with their ranks thinning thanks to the passing of time. They remain determined to pay tribute to comrades and shipmates who gave their lives to save Europe from fascism in 1944.

Warspite was just one of many Allied warships in the massive invasion force. It was a mainly British fleet, working to a plan laid down by Gen. Bernard Montgomery and Adm. Bertram Ramsay under the supreme command of the USA’s Gen. Dwight D. Eisenhower.

It is recorded that 156, 115 Allied troops went ashore on D-Day itself, with 83,115 belonging to the British and Canadian forces and 73,000 from the American military.