Hong Kong Unrest Threatens the City's Economy (And China's Too) 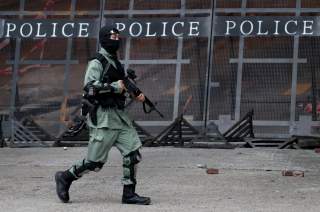 Six months of civil unrest in Hong Kong have taken a toll on its economy, which has officially entered its first recession in a decade. The city's third-quarter gross domestic product (GDP) contracted by 2.9 percent in the third quarter of 2019. But while its financial sector — the city's economic linchpin — remains robust for the time being, the worst is likely yet to come.  Deep-rooted grievances are fueling the escalating and increasingly violent attempts by protesters to resist Beijing, but their actions are only hardening the central government's resolve to compensate for the unreliability of its most critical financial link to the world.

With a quick and relatively peaceful de-escalation now out of the question, Hong Kong's businesses and investors will have to adjust to the very likely new normal of operating against the backdrop of persisting protests and political impasses. And this reality, combined with Beijing's steadily strengthening hand and its possible intervention in the city, will weigh heavily on Hong Kong's status as Asia's leading financial hub for the foreseeable future.

Bracing for a Bumpier Ride

What started as street demonstrations protesting a pending extradition law have since unraveled into regular acts of rebellion featuring traffic disruptions, vandalism, violent street clashes and attacks. Security crackdowns have been unable to contain the radicalized protests, which show no signs of diminishing. In recent months, the protest movement's more peaceful components have become largely marginalized, with more extreme cells now taking center stage. The absence of arrestors within the movement, combined with the leaderless nature of the protests, means a de-escalation mechanism is virtually nonexistent — short of the protests calming on their own, or being squelched by more heavy-handed security responses.

This prospect of sustained unrest will increasingly strain Hong Kong's financial system and could put the city on a path to its worst recession in more than 20 years. Already, investors have started moving assets to other, more secure regional hubs such as Singapore and Taiwan. Hong Kong's foreign reserves are currently at a healthy $433 billion. But a continued outflow of investment as a result of ongoing protests will test the strength of those reserves and the city's stock market. The past half-year of protests have also taken a sizable toll on the city's vital tourism and retail sectors — both of which have suffered amid the instability, accounting for an estimated 2 percent of the city's recent 2.9 percent GDP contraction. And a near-term recovery is nowhere in sight, especially considering that travelers from the Chinese mainland previously constituted roughly 80 percent of Hong Kong's total tourist flows.

A Decade in the Making

Hong Kong's dimming economic prospects — as well as the protests exacerbating those woes — are largely rooted in Beijing's attempts over the past decade to integrate more closely with the enclave at the expense of its autonomy. Without a booming manufacturing sector or high-tech industry, Hong Kong relies on trade, finance and tourism, which combined account for more than 90 percent of the city's economy, to drive development. But each of these sectors largely (and increasingly) relies on the city's ability to connect with the mainland economy and market: Nearly half of the city's trade, for example, is now linked to mainland China.

Even before the protests broke out, Hong Kong's economy had been suffering from the ripple effects of China's economic slowdown and trade war with the United States. The city's GDP growth had slowed steadily since the beginning of 2018 due to the subsequent drop-off in investments and trade revenue. This reflects the dilemma of Hong Kong's financial reliance: Without more self-driven development, it will continue to depend on the mainland to generate wealth and employment, granting Beijing greater influence and control over the city. But the deepening integration also comes at the cost of undermining Hong Kong's unique status as a free port with Western-style regulations that has made it such an alluring and lucrative business hub.

In tandem with the escalating unrest in Hong Kong, the central government has reportedly ordered its state-owned companies to boost their presence in the city's equity and real estate markets. To assure business and investor confidence in Hong Kong, Beijing will likely also try to use its own reserves and policy tools to intervene as it goes into crisis mode. But China's capacity to do so will be limited by its own slowing economic growth. Direct intervention from Beijing would also almost certainly make matters worse in Hong Kong by causing massive business uncertainty. It would also risk inviting additional Western sanctions, as well as prompting the United States to strip the city of its special customs status — both of which would have economic knock-on effects for the mainland.

For Beijing, the rise of mainland cities such as Shenzhen and Shanghai in recent years have decreased Hong Kong's economic significance. Hong Kong's ongoing unrest will further compel the central government to test its once restrained financial reforms and currency liberalization in these burgeoning domestic markets. As it searches for more investment partners and targets for preferential policies, Beijing will also seek out alternative links abroad in cities like Singapore. But given its slowing economy and general caution toward such sweeping strategic changes, attempts to replace or even diversify Hong Kong's status will be met with little, if any, success in the short term.

No End in Sight

Perhaps most importantly, Hong Kong's rising financial reliance on the mainland has created a growing power asymmetry, deepening the culture of defiance among the city's residents. But as this domestic resistance has strengthened, so too has Beijing's grasp, creating a ceaseless cycle of escalation. Proposed reforms to Hong Kong's electoral system, for example, sparked mass demonstrations in 2014 that set the precedent for more violent tactics. But unlike the 2014 protests, the current movement has become centered solely on rebelling against Beijing's very control over the territory.

With universal suffrage now the chief demand of the protesters, any limited concessions — such as possible further dialogue or even a forced resignation of the city's disgraced chief executive, Carrie Lam — are unlikely to offer any relief from the chaos. This hostile environment will inevitably only harden Beijing's views of Hong Kong by leaving little room for compromise. Already, the central government is considering harder policies, including the highly controversial imposition of a national curriculum in the city's schools.

As long as Beijing continues to increase its control over the city (discreetly or otherwise), future flare-ups around any politically sensitive matter will remain all but certain, whether it's Hong Kong's legislative elections in 2020, the chief executive election in 2022, or other central government policies reminiscent of the extradition bill that started it all. Given this reality, the situation in Hong Kong will likely get worse before it gets better.

That said, Hong Kong's post-handover economy has managed to quickly recover from past threats, including the Asian financial crisis in 1997, an outbreak of Severe Acute Respiratory Syndrome (SARS) in 2003 and the protests in 2014. But over the past five years, Hong Kong citizens have racked up a lot more grievances extending far beyond just its leaders' actions in recent months. Thus, even if Hong Kong is spared a full-blown financial crisis or security crackdown, mainland China may find it has traveled too far down the path of polarization for the city to retain its lofty perch as one of East Asia's preeminent financial hubs for the foreseeable future — an outcome that would deal a significant blow not only to Hong Kong's pocketbook, but also its own.

Can Hong Kong's Economy Weather the Storm? is republished with the permission of Stratfor Worldview, a geopolitical intelligence and advisory firm.