Hong Kong's Elections Was A Big Loss For Pro-Chinese Forces 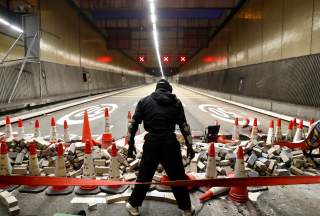 Initial results from Sunday’s election in Hong Kong indicate that pro-democracy forces have handed Chinese ruler Xi Jinping a stunning setback. Pro-Beijing candidates are going down to defeat in District Council elections, the first real test of sentiment in the territory since protests began in April over the introduction of a bill authorizing extraditions to mainland China.

So far, pro-Dems have won 88.6 percent of the vote for 452 seats on 18 District Council boards. They have so far taken 351 seats versus 45 for the “establishment” forces. “Absolute political annihilation for the pro-Beijing camp” is how Stephen McDonell, a BBC China correspondent, described the result on Twitter. Tom Mitchell of the Financial Times called it a “Himalayan-sized avalanche.”

The District Councils, responsible for routine municipal services, have little power, but the Sunday elections took on significance, widely seen as a referendum on various matters because they are the only government bodies in Hong Kong whose members are elected by universal suffrage. “Sunday’s vote,” CNN noted on the eve of the election, “offers the first objective test of how people in the city feel about the protests and the government.”

Therefore, Carrie Lam, the chief executive of the territory, and by extension Beijing, had much at stake. And so did youthful black-clad protesters, who have employed increasingly destructive and violent tactics in more than five months of continuous demonstrations. The rallying cry of some China-friendly candidates was “Kick out the black force.”

Voters, in fact, kicked out China’s friends, including the high-profile Junius Ho, an establishment heavyweight. Pro-Beijing forces, holding 327, or almost three-quarters, of the seats prior to the election, controlled all the District Councils.

No longer. Observers had expected pro-democracy candidates to do well in Sunday’s poll but not as well as early results show.

Where does Hong Kong, a special administrative region of the People’s Republic of China, go from here?

“If a lot of voters are using their ballot to voice their discontent, Lam needs to think of how to respond to that,” said Edmund Cheng Wai of Hong Kong’s City University to the Beijing-friendly South China Morning Post just before polls opened. “People have been helping things to de-escalate gradually in the past week, the government needs to take advantage of that and offer more.”

Yes, that sounds right. Perhaps the embattled Mrs. Lam will make concessions, but that is not a foregone conclusion. It is just as possible that Xi Jinping, who has taken almost full control of the Hong Kong government, doubles down on his unyielding approach.

Said Jordan Pang Ka-Ho, a pro-democracy candidate, before the voting began, “I don’t think the result will put pressure on the government, as it hasn’t been listening to the people.”

Mr. Pang has put his finger on something. Chief Executive Lam, acting on General Secretary Xi’s orders, has fueled protests since April by taking an intransigent line, which is why “Do You Hear the People Sing?” from Les Miserables has become one of the anthems of protesters this year.

Now, Lam is not the only political figure in trouble. Xi must be as well. Before becoming China’s ruler, he held the Hong Kong portfolio on the Communist Party’s Politburo Standing Committee. Since taking over as general secretary at the end of 2012, he has continued his tough approach. And now that he has grabbed what looks like absolute power, he has divested others of not only influence but accountability.

This means Xi has no one else to blame for an obviously failing Hong Kong policy. China’s supremo already has been weakened, something evident by the release in the middle of this month of 403 pages of documents by the New York Times detailing the party’s persecution of Uighurs and Kazakhs in what Beijing calls “Xinjiang.” Those documents embarrass Xi, meaning their disclosure to the paper was undoubtedly intended to undermine his position.

“Argument in the party is bitter,” wrote Arthur Waldron on the Pangolinpol listserve this month. “The leaders are stalemated and paralyzed.” The increasingly obvious infighting, he stated, is “potentially mortal.”

Mortal indeed. Xi has no good options. He has no exit from his policies in Hong Kong because further hardheadedness will inflame the situation and concessions will trigger demands for more of them.

He has another constituency to worry about. The people in mainland China could become emboldened by the almost-complete rejection of his policies in Hong Kong. Mainland people may not sympathize with Hongkongers, but they can be inspired by them to act on their own grievances.

Xi now also has to worry about his fellow senior leaders in Beijing, who can convincingly argue that, by pushing too far with his extradition bill, he is to blame for the unfolding debacle in Hong Kong.

Xi, during more than a half-decade of relentless purges, has given hundreds of Communist Party members a reason to get even. He has now also given them a means to do so.

Gordon G. Chang is the author of The Coming Collapse of China. Follow him on Twitter @GordonGChang. This article first appeared last month.