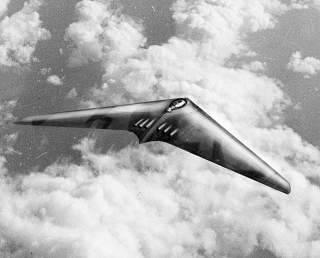 In 1942, German air force chief Hermann Goering sketched out the requirement for the Amerika bomber—a strategic bomber capable of making 7,200-mile round-trip across the Atlantic. Earlier in 1938, Goering had stated:

“I completely lack the bombers capable of round-trip flights to New York with a 4.5-tonne bomb load. I would be extremely happy to possess such a bomber, which would at last stuff the mouth of arrogance across the sea.”

By the end of World War II, Nazi Germany was pursuing a diverse array of Wunderwaffen (wonder weapons.) The diversion of valuable production resources to so many experimental technologies reflected an almost megalomaniacal tendency to believe science could compensate for Nazi Germany’s materially untenable position combatting the combined might of the Soviet Union, the United State and the United Kingdom.

The decentralized nature of German military research led to money being funneled into numerous competing projects instead of being efficiently prioritized for faster and more concrete results.

German manufacturers built three different prototype heavy bombers to perform the task: the Junkers Ju-390, the Messerschmitt Me-264 and the Heinkel He-277. While prototypes of the Me 264 and Ju-390 were flown, none entered large-scale production. Nazi scientists also began developing intercontinental ballistic missiles, a manned suborbital rocketship called the Silbervogel, and piggy-back aircraft to execute inter-continental strikes without much to show for it.

In 1944, the air ministry issued a revised requirement for bomber with 6,800-mile-long range with 8,800-pound bombload. After other German firms failed to offer viable design concepts, in December 1944 the Horten brothers proposed their own novel idea: a flying wing powered by six Jumo 004B turbojets embedded on the back of its fuselage pod. These were derived from the same engines then being used on German Me-262 jet fighters.

The Horten XVIIIA was in effect a spinoff of the Horten brother’s wooden Ho.229 flying-wing jet fighter. Though aerodynamically unstable due to their lack of tail stabilizers, flying wings produce very little drag, thus allowing for higher speeds.

Flying wings also lend themselves small radar-cross sections. After the war, Reimar Horten claimed he had intentionally designed the Ho 229 using radar-absorbent plywood as a stealth aircraft. While there’s no written evidence showing the Nazis realized the Ho.229’s stealth potential during the war, testing has shown that Horten designs did have a modestly reduced radar cross section which would have decreased radar detection range.

Even as American troops poured over the Ludendorff Bridge at Remagen into Nazi Germany, Goering still wanted his Amerika bomber and approved the design in February 1945—but he wanted the brothers to build the jet by committee with engineers from Junkers and Messerschmitt. These new members wanted to install large vertical tail fins, despite the resulting increase in drag.

Supposedly this new beast stored enough fuel in its wings for twenty-seven-hour round-trip treks to attack New York. Its theoretical maximum speed of 528 miles per hour and service ceiling of 52,000 feet would have allowed it to fly higher and faster than the fastest piston-engine U.S. fighters of the time. Nonetheless, Horten proposed installing two belly-mounted thirty-millimeter autocannons for self-defense.

The Horten brothers convinced Goering to choose the Ho.XVIIIIB over the A model, and production was approved to commence in the summer or fall of 1945. But Nazi Germany instead surrendered early in May.

The combination of speed and reduced radar detection range would have made the Horten Amerika bomber very difficult to intercept. In fact, we know the flying jet bomber concept was viable because two years later, U.S. company Northrop test flew several prototype YB-49 flying wings with a range of nine thousand miles.

The YB-49 spanned fifty-two meters wide and were powered by six turbojet engines embedded in the rear wings. Though the YB-49 didn’t enter service, it may have informed Northrop’s later development of the B-2 Spirit stealth bomber serving the U.S. Air Force today.

However, even if the Nazis had somehow managed to build the Ho XVIII, their plan had a huge problem: there’s hardly any reason to believe a few raids on American cities would have had any useful military impact. It took hundreds of American strategic bombers based relatively nearby in the United Kingdom flying thousands of costly raids to put any sort of dent in the Germany war economy—and indeed, economic minister Albert Speer still managed to increase the output of German factories by the end of the war despite the enormous bombloads disgorged by Allied bombers.

So how could a handful of raids by Nazi bombers meaningfully damage the huge U.S. war economy?

Perhaps the Nazis mistakenly counted on a political effect. To be fair, the materially ineffectual one-shot Doolittle raid of 1942 had caused Japan to redirect substantial resources from its offensive operations to home defense. Perhaps Goering hoped a few raids would cause the U.S. to redirect force away from Europe, or motivate the supposedly ‘soft’ democratic citizenry to demand U.S. withdrawal.

But this not only incorrectly assessed American determination, but failed to appreciate the vast surplus capacity the United States had to build up its home defenses as well as wages war overseas. In the final month of the war, for example, a Nazi submarine sortie aimed at diverting pressure to the U.S. East Coast triggered a massive U.S. counter-blockade called Operation Teardrop—without slowing down the U.S. advance into Germany to the slightest degree.

There’s only one, chilling scenario in which the Amerika bomber would have had an impact: if Nazi Germany had completed development of its own nuclear weapons. In that event, even one or two bombers could inflict apocalyptic damage East Coast cities. Even then, however, such strategic attacks would not have halted the huge Allied armies already steamrolling the Wehrmacht in Europe, and would surely have precipitated nuclear retaliation by the United States.

Fortunately for the world, Nazi nuclear weapon research proved as unfocused as other Wunderwaffe projects, and Germany suffered a severe shortage of qualified physicists due to its racist policies and politicization of academia. This, combined with successful Allied sabotage of heavy water facilities in Norway, led the Nazis to largely abandon their nuclear weapons ambitions as too expensive in 1942.

The fact that Berlin was making new plans to manufacture sophisticated intercontinental jet bombers even while columns of Allied tanks were advancing deep into Germany highlights how Nazism was not only an abhorrent ideology, but instilled a remarkable capacity for self-delusion. Thus it’s no surprise that the megalomaniacal villain of the film Captain America flies an apparent look-alike of the Horten jet bomber—on a mission to bomb New York City, of course.