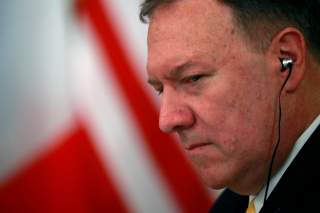 “The Committees are investigating the extent to which President Trump jeopardized national security by pressing Ukraine to interfere with our 2020 election and by withholding security assistance provided by Congress to help Ukraine counter Russian aggression,” Reps. Eliot Engel, Adam Schiff, and Elijah Cummings wrote in a letter to Pompeo.

They threatened Pompeo with obstruction charges if he does not comply with the subpoena by Oct. 4.

In the complaint, a CIA analyst detailed to the White House claimed that multiple White House officials expressed concerns about a July 25 phone call between Trump and Ukrainian President Volodymyr Zelensky.

The complaint, which was released Thursday, alleged that White House officials tried to cover up a transcript of the phone call because of Trump’s remarks to Zelensky.

Trump has denied saying anything wrong in the call, a transcript of which the White House released on Wednesday. In a 30-minute chat, Trump and Zelensky discussed a broad array of topics, including Zelensky’s recent election win, U.S. support for Ukraine, and an investigation into former Vice President Joe Biden and his son, Hunter.

Trump brought up allegations that originated with his lawyer, Rudy Giuliani, that as vice president in 2016, Joe Biden forced Ukraine’s president at the time to fire a prosecutor who was investigating a company affiliated with Hunter Biden.

Volker is one of the five officials who Democrats hope to depose.