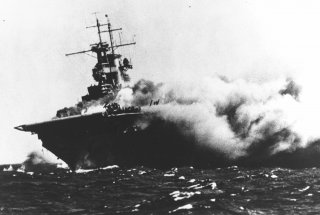 The Marine tankers of C. Company faced a literal bloodbath as they embarked on the Marine Corps’s first opposed amphibious tank landing at the strategically vital Taraw atoll. The beach ahead, aptly codenamed Red One, was piled high with dead and wounded Marine riflemen cut down by fire from fortified Japanese artillery positions and machinegun nests.

Due to poor beech reconnaissance, the Landing Craft Mechanized individually transporting each of C Company’s 30-ton Sherman tanks had been forced to deposit their charges on a reef hundreds of yards offshore. The unit’s M4A2 Sherman medium tanks waded towards their landing zone only to find the horrifying human barricade before them.

Unwilling to crush fellow Marines, company commander Captain Edward Bale ordered the platoon he was accompanying to veer left. Unfortunately, three of the Shermans promptly sank and flooded in huge submerged shell holes left behind by the preparatory naval bombardment.

Only three Shermans named Chicago, China Gal and Bale’s Cecilia made it ashore. Bale donated his tank’s .50-calibers machineguns to the infantry and began blasting targets on request. But as Bale shifted his platoon back to the right, Chicago too flooded and lost its electrical systems.

Things also went poorly at Beach Red 3. Condor was mistakenly basted by a Navy dive bomber and Charlie was knocked out by an anti-tank gun shooting at the weaker side armor. The tank Cannonball smashed into a fuel dump with fiery results. Commando went on a rampage behind enemy lines before being knocked out. And Colorado had to douse itself in the sea to put out a fire spurred by a Molotov cocktail.

China Gal was struck by a 37-millimeter shell dueling an eight-ton Type 95 Ha-Go light tank that disabled her gun and jammed her turret. The Type 95 was subsequently dispatched, either by gunfire or ramming according to different accounts.

The Stuart light tanks of the Marine 2nd Tank Battalion didn’t make it ashore—four of the transporting LCMs were promptly sunk by Japanese coast artillery and the rest withdrew.

As the evening fell, the surviving Marines on the shallow beachhead could muster only three Shermans, one with a broken main gun.

Having fought alongside tanks in World War I, Marine officers were interested in testing out the still-unreliable war machines. On December 5, 1923 the first Marine tank platoon was formed at Quantico, Virginia including twenty-two personnel and three French-derived FT-17 light tanks (Model 1917 in U.S. service). Two were armed with twin Browning .30-caliber machineguns, and one with a 37-millimeter Puteaux cannon.

The 7-ton FT-17 was a revolutionary design for incorporating a turret with 360-degreesrotation. It also had better mobility at 5.5 miles per hour compared to beefier British-style “land ships.” Eventually the Marine tankers received two more FT-17s and a turretless communications tank.

The U.S. Marine Corps has always emphasized its nature as an “expeditionary” service, resulting in obsession with keeping its vehicles light enough to easily unload from small landing ships. It first tested the platoon in an exercise on Culebra island, then shipped it off to China in 1927 where it guarded the Tianjin railway. After a successful but uneventful stint, the unit was withdrawn and disbanded in 1928.

The Stuart of Guadalcanal

The German Blitzkrieg finally caused the Marine Corps to look for a tank that, say, could actually fight other tanks with a cannon. It initially received 36 outdated 13-ton ex-Army M2A4s with 1 inch of armor, followed by over 600 M3 Stuarts with 2-inch frontal plates. Newly formed Marine Divisions would each receive their own Tank Battalion of around 49 tanks, while defensive battalions garrisoning remote Pacific islands got their own five-vehicle tank platoons. Marine tankers were trained in Camp Elliot, California.

In August 1942, the M2A4s and M3s of the 1st Tank Battalion landed on Guadalcanal and Tulagi becoming the first Marine tank units to see combat in the dense rainforests of the South Pacific islands. Both types had 37-millimeter guns which were reasonably effective against light Japanese tanks, but they could also spew canister rounds that unleashed a shotgun-like storm of 122 steel balls that could shred infantry in the open. These proved unusually effective because of the Japanese tendency to launch terrifying human wave attacks.

In an article, David Alan Johnson describes the Stuarts employment in the August 27 Battle of Tenaru:

…Tregaskis watched as the “awful machines” rattled toward the edge of the grove and began flushing the enemy soldiers from among the trees. “It was like a comedy of toys, something unbelievable, to see them knocking over palm trees,” he later wrote.

The Stuarts went on blasting the enemy, running over bodies of Japanese dead and wounded. The roots of the coconut trees, which were large and thick and sometimes protruded several feet above the ground, saved the lives of several Japanese. One of the fortunate few was Sergeant Sadanobu Okada of Ichiki’s headquarters unit. Okada played dead as the tanks rolled in. One drove right over him, but a coconut root took the tank’s full weight. When the three Stuarts returned to the American lines, they literally dripped with blood. Vandegrift wrote, “The rear of the tanks looked like meat grinders.”

Japanese infantry didn’t dispose of hard-hitting ranged but portable anti-tank weapons like the bazooka, and were forced to assault tanks using satchel charges, grenades, magnetic mines, or even suicidal mines held at the end of a pole. At Guadalcanal Marine tankers first adopted tactics for ‘back-scratching’ each other with bursts of machine gunfire to kill attackers clambering onto their hulls.

The Sherman at Tarawa

However, the Stuart’s gun lacked punch against entrenched troops. The Marine Corps now wanted something heavier, and in October 1942 finally convinced the Army to transfer twenty-two M4A4 Sherman tanks for evaluation, leading to a decision to field two Corps-level medium tank battalions.

The Marines wanted the Ford gas-engine powered M4A3-model Sherman but were compelled to accept the diesel-engine M4A2 instead. Fortuitously, the 30-ton tank entered service just as the Marines began fighting in the less porous terrain of the Central Pacific. With its 3 inches of frontal armor and 75-millimeter guns, the Sherman utterly outgunned much lighter Japanese Type 95 and Type 97 tanks.

The heavier Shermans could be deployed thanks to the construction of Landing Ship Docks with floodable internal well decks that could carry small LCM boats to ferry tanks ashore.

The Marine Sherman’s combat debut at Tarawa in November 1943, however, began inauspiciously as described at the beginning of the article. While their frontal armor was impenetrable to Japanese 37-millimeter anti-tank guns, they still fell prey to larger anti-ship artillery and close assaults.

But as the second day (D+1) of the battle dawned, the three tanks became the rallying point for leathernecks pinned down across the island, who began relaying shells and fuel from submerged Shermans to keep the three survivors fighting. The M4s ranged dozens of meters ahead of Marine riflemen, busting one bunker after another with direct cannon fire, while Marine infantry behind them picked off assaulting Japanese troops. The Shermans were eventually joined by Stuarts and M3 halftracks toting 75-millimeter guns.

Eric Hammel recounts in World War II magazine how one Marine risked his neck to make sure the buttoned-inside Sherman crews were hitting the right targets and not friendlies:

Browning automatic rifleman, Private First Class James Goldman, climbed behind the Sherman’s turret and crouched near an open hatch. As fellow riflemen guided the driver through thick smoke and debris, Goldman called shots by shouting to the tank gunner. The improvisation worked like a charm…The cordon around Beach Green was 200 yards deep.”

The Marine tanks first helped capture an airfield on D-2 then participated in the final assault that crushed resistance on D+3.

Just a few Shermans helped turn the tide of a disaster—but clearly the Tarawa landing had left much to be desired. Even the 75-millimeter guns still struggled to bust bunkers, and the M3s were clearly out of their depth. Furthermore, the tanks needed to cooperate better with Marine riflemen, and find ways to avoid losses to flooding and enemy fire.

A follow-up article will look at just how the Marine Corps learned from the experience to modify its Stuart and Sherman tanks with additional armor, flamethrowers and other innovations to meet the challenges of brutal battles in Saipan, Iwo Jima and Okinawa.