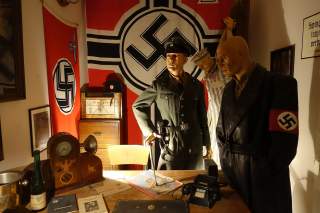 Armies have long used prisoners as soldiers. Imperial France deployed the Bat’ d’Af’ in the harshest of its colonies. During the American Civil War, captured Confederate soldiers sometimes recanted the rebellion, swore allegiance to the Union and became Galvanized Yankees. The former rebel prisoners fought and bled for the country they once shunned.

The Nazis made liberal use of penal units, especially in the latter days of World War II. Soldiers with discipline problems and criminals from within Germany often ended up in the Strafbattalion — military units comprised of prisoners. The Strafbattalion performed awful missions such as clearing minefields.

But the horrors of serving in the Strafbattalion pales in comparison to the war crimes of the most reviled of Nazi units — the 36th Grenadier Division of the Waffen SS. This notorious group, also known as the Dirlewanger Brigade, began as an experimental unit of poachers and became a division of weaponized criminals.

To understand the 36th Grenadier Division you have to understand its leader — Oskar Dirlewanger.

Born in 1895 and enlisting in the German army at age 18, he fought as a machine gunner on the Western Front. The man had a taste for violence, and the war was the defining experience in his young life. At the end of the war, he became trapped in Romania as German troops surrendered themselves to internment camps.

But Dirlewanger refused to be a prisoner. He led 600 other soldiers from the Romanian front back into Germany. “Henceforth he adopted an unrestrained mode of life,” historian Peter Longerich wrote of Dirlewanger in Heinrich Himmler: A Life. “Characterized by contempt for the rules and life of civil society.”

Between the wars, Dirlewanger enrolled in college and earned a doctorate in political science, joined the Nazi Party, beat up German communists, stole money from his employers and used his position in the party to rape a 14-year-old girl.

A German court convicted Dirlewanger of statutory rape. The Nazis kicked him out of the party and his college revoked his doctorate. He then served two years in prison. A 1942 Reich police report described Dirlewanger as “a mentally unstable, violent fanatic and alcoholic, who had the habit of erupting into violence under the influence of drugs.”

While in prison, he petitioned Heinrich Himmler to allow him to join the SS. He claimed the allegations of sexual misconduct were part of a political conspiracy to ruin him. And that probably would have been the last history heard of Dirlewanger if not for SS official Gottlob Berger.

Berger and Dirlewanger served together during World War I. Now Berger pulled him from prison and sent him to fight with German units in the Spanish Civil War. Dirlewanger served with distinction and when he returned, the Nazis took him back into the party.

Berger also accepted Dirlewanger into the SS and gave him command of a new, irregular unit.

In 1940, the SS began an experiment. As the Wehrmacht rolled through Europe, it faced increased resistance from partisan insurgents. In response, Berlin extended a conditional pardon to non-violent, non-trap-using poachers in Germany’s prisons. The idea was to use the skilled woodsmen to hunt and kill the partisans in occupied territories.

The Nazi high command found 55 convicted poachers, trained them in marksmanship and added four SS officers to keep them in line. Then Berger put his old buddy Dirlewanger in charge of the unit and shipped it to Poland.

For the first year and a half of its operation, the 36th served as a labor battalion then as guards for Jewish slave laborers. Back home in Germany, the Nazi high command argued over the unit’s status. The SS wanted nothing to do with a convicted sex criminal. But Berger defended Dirlewanger, and the unit eventually came under nominal SS jurisdiction.

The Dirlewanger Brigade quickly ran out of poachers and began to take any men it could get. The small unit swelled with criminals, deserters, punished Nazi soldiers and even concentration camp survivors.

“It has been estimated that only 10 to 15 percent of Dirlewanger’s men were Waffen SS on probation,” wrote George H. Stein in Waffen SS: Hitler’s Elite Guard at War. “Another 30 percent were former concentration camp inmates and more than 50 percent were former members of … the Wehrmacht.”

Dirlewanger maintained unit discipline through beatings and shootings. Desertions were common. He gave his men free reign to loot, rape and pillage. If a civilian or soldier displeased him, Dirlewanger shot them them in the hand. If one of his men grabbed loot that he wanted, he would execute him on the spot.

Other German soldiers — and especially the other Waffen SS — found Dirlewanger and his men detestable. They made several attempts to remove the dangerous man from the battlefield and prosecute the soldiers for atrocities. But Berger always interceded and squashed the complaints.

The complaints against the soldiers continued, so the SS moved the unit from Poland to Belarus to both allay the fears of field commanders and help crush a partisan uprising there. Dirlewanger’s group killed 30,000 people in Belarus. His favorite method of suppression was to round up dissidents in a barn, set it on fire and machine gun anyone who fled.

The ranks of the group swelled and it officially became a regiment. The Dirlewanger Brigade began to accept the criminally insane into its ranks.

When the Soviets pushed West, the Germans retreated and Dirlewanger and his men returned to Poland. It was here the unit would commit its most horrible war crimes during the Warsaw Uprising and Wola Massacre.

The witness testimony of the events reads like something from a horror film. One witness described Dirlewanger ordering his men to execute 500 young children. He wanted his troops to save their bullets and demanded they do the bulk of the work with rifle butts and bayonets.

Another description of the rape and murder of a young woman by Dirlewanger himself is so surreal, violent and awful that it’s believable only because of the man’s past atrocities and convictions. The rapist indulged his basest desires in Warsaw.

After Warsaw, the Dirlewanger Brigade traveled to Hungary to help put down the Slovak National Uprising, but the war in Europe would soon come to an end, and so would Dirlewanger’s atrocities.

The Red Army pushed west and a Soviet soldier shot him in the chest. Dirlewanger survived and went into hiding.

French authorities later captured him in Altshausen in southern Germany after the war. They tossed him into a camp to await trial, but he never made it. The French authorities at the time claimed Dirlewanger died of natural causes, but the man’s cell mate said he watched as Polish guards beat him to death.

If Polish guards did beat him to death, then it was an appropriate end to one of World War II’s most savage war criminals.