How Afghanistan Is Distracting America From Deterring China 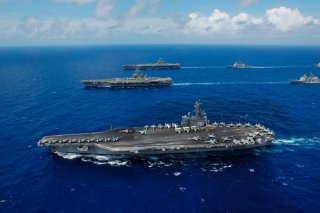 To support the Biden administration’s precipitous withdrawal from Afghanistan, the Pentagon plans to shift the USS Ronald Reagan aircraft carrier strike group from its normal area of responsibility in the Western Pacific to the Arabian Sea and Indian Ocean for four months this summer. With U.S.-China relations only becoming more tense, withdrawing the most significant U.S. air and naval asset postured in the Pacific to deter Chinese aggression is just the latest evidence of insufficient defense spending, inadequate U.S. naval capacity, and an ill-advised withdrawal from Afghanistan.

In March, neglecting the advice of commanders and conditions on the ground, President Joe Biden confidently announced the decision to withdraw the remaining U.S. forces in Afghanistan by September. “U.S. troops,” Biden declared from the White House on April 14, “will be out of Afghanistan before we mark the 20th anniversary of that heinous attack on September 11th.”

One of the motivations for the timeline-based withdrawal was a desire to focus finite U.S. military resources on deterring aggression from China in the Indo-Pacific. In his speech last month, Biden emphasized the need to focus on “an increasingly assertive China.” And Biden’s political appointees at the Pentagon have rightly emphasized the need to increase U.S. military capability and capacity in the Indo-Pacific.

Over the past two decades, insufficient defense funding left the Pentagon with insufficient resources to maintain or establish the force posture necessary in both the Indo-Pacific and the Middle East.

As a result, the margin of safety has eroded in both theaters. In the Indo-Pacific, as Beijing undertook the largest military modernization in the history of the People’s Republic of China, the United States failed to make the necessary posture shifts, doctrinal developments, and capability investments. Top American military officers in the Indo-Pacific have repeatedly sounded the alarm.

In the Middle East, meanwhile, successive presidents ignored persistent threats and continued to cut U.S. force posture there. The United States had 170,000 troops in Iraq in 2007 and approximately 100,000 troops in Afghanistan in 2011. But by the time Biden took office, there were fewer than roughly 6,000 troops in Afghanistan and Iraq combined. That was hardly an excessive troop commitment to prevent another 9/11-style attack on our country and avoid the return of the Islamic State caliphate.

More broadly, the problem in the wider Middle East has been that the Islamic Republic of Iran and its terrorist proxies, as well as other jihadist terrorist groups in Afghanistan and elsewhere, were not following the American script. America’s adversaries cared little whether we were weary of conflicts in the region.

The decision to shift the USS Ronald Reagan out of the Western Pacific, therefore, is just the latest evidence that reducing U.S. military commitments in the Middle East and increasing U.S. military posture in the Indo-Pacific is easier said than done – especially when Washington fails to provide sufficient defense funding.

To be sure, military withdrawals can be periods of vulnerability for U.S. troops, and it is essential to do what is necessary to protect American forces withdrawing from Afghanistan. But it is notable that the U.S. Navy had no other carrier strike group available to cover the withdrawal and had to rely on the USS Ronald Reagan carrier strike group, based in Japan, to conduct the mission.

The irony of the Afghanistan withdrawal, at least for now, is that the withdrawal will “free up” Army ground units but actually increase demands on the U.S. Navy and Air Force – exactly the forces most needed in the Indo-Pacific. To make matters worse, due to the increased time required to get to the battlefield, the quality of air support provided to forces in Afghanistan from a carrier in the Arabian Sea or from a base in Qatar will be inferior to the support previously provided by assets based in Afghanistan.

This crisis highlights the fact that the Navy remains unable to meet its posture requirements without drastic measures such as pulling the Seventh Fleet carrier strike group out of the Western Pacific. Continued and even increasing demand in the Middle East for Air Force assets will place an equally difficult demand on Air Force readiness and warfighting capability. For both the Air Force and Navy, these realities demonstrate that we need both to retain the legacy assets we hold today and to procure new equipment to address the growing threat from Beijing. It’s not “either/or” – it’s “both/and.” And that won’t be possible without significantly increasing the budgets of both services – in accordance with the recommendations of the bipartisan National Defense Strategy Commission.

Some may respond by suggesting that this surge in demand for naval forces in the Middle East is only temporary. But the Biden administration’s decision to conduct an unconditional, timeline-based withdrawal from Afghanistan may actually result in more – not less – demand for U.S. forces in the region in the long run.

That scenario, and not the indefinite maintenance of 3,000 to 4,000 U.S. troops in Afghanistan alongside a greater number of NATO forces, represents the real threat to strengthening U.S. military posture in the Indo-Pacific.

As the Department of Defense has sought to implement Biden’s withdrawal, it has become increasingly clear that the political decision from the White House came before vital military planning had been completed.

How will the United States conduct counterterrorism operations in Afghanistan after the withdrawal? Where will those assets be based? Have such basing agreements been negotiated and concluded? How will the United States provide maintenance and training support to the Afghan forces from outside the country? Can Washington transfer vital contracts to Kabul before our withdrawal? How will American diplomats be protected after the military withdrawal? According to reporting this week by The New York Times, it appears that many of these questions remain unanswered.

The Biden administration deserves credit for doing what is necessary to protect U.S. forces withdrawing from Afghanistan. But the administration’s decision to shift the sole aircraft carrier based in the Pacific to the Arabian Sea highlights the consequences of insufficient defense spending, the fact that America lacks sufficient naval forces, and the costs of a timeline-based withdrawal from Afghanistan that seems to put more emphasis on the demands of the Taliban than the protection of U.S. national security interests.

Bradley Bowman is senior director of the Center on Military and Political Power (CMPP) at the Foundation for Defense of Democracies (FDD), where RADM (Ret.) Mark Montgomery is senior director of the Center on Cyber and Technology Innovation (CCTI) and a contributor to CMPP. For more analysis from the authors, CMPP, and CCTI, please subscribe HERE. Follow the authors on Twitter @Brad_L_Bowman and @MarkCMontgomery. Follow FDD on Twitter @FDD and @FDD_CMPP and @FDD_CCTI. FDD is a Washington, DC-based, nonpartisan research institute focusing on national security and foreign policy.

This article first appeared at the Foundation for Defense of Democracies.