How Afghanistan Will Contend With a Worsening Refugee Crisis 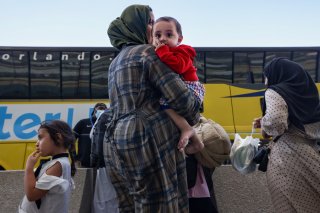 The evacuation of more than 100,000 civilians from Afghanistan is over, and Afghan refugees have started arriving in the United States, at military bases in other countries, or elsewhere for asylum processing. But those evacuated represent just a sliver of the millions of Afghans who have lost their homes and livelihoods due to war and may be on the move, yet again.

According to the United Nations High Commission on Refugees, there were already 2.8 million Afghan refugees, an estimated 2.9 to 4 million internally displaced persons (IDPs), and close to 250,000 asylum seekers stemming from conflicts stretching multiple decades. Those formal statistics likely are an undercount. Just this year a staggering half a million or more Afghan civilians have been forcibly displaced, and in August, the United Nations issued a no-return advisory noting that the conditions in Afghanistan have rendered it no longer suitable for refugees to return to. In sum, an estimated fifteen to twenty percent of all Afghans are currently displaced either within their own country or abroad.

This is not a temporary crisis that will be resolved by the end of the airlift evacuation. This is a multigenerational crisis that has defined a way of life for millions of Afghans, and unless something changes, threatens to define it for millions more for many more years to come.

Policies to help displaced people are based on the false assumption that they will eventually go home. Our recent study on refugee returns finds that conflict-based displacement upends people’s lives for the long term. Only about a third repatriate or return within ten years of a conflict’s end.

The number of people in refugee limbo has ballooned globally because the three durable solutions for refugees—return home; resettlement in another country; or integration in the country of asylum (such as gaining citizenship)—happen at such low rates. The reasons are myriad and complex: Multiple, extended conflicts; declining regional cooperation to prevent displacement or create conditions conducive to return; resistance to absorbing refugees through integration or resettlement; and low rates of return. All of these are bearing down on Afghans.

The Taliban, for their part, have been saying that residents should not flee. They have announced a general amnesty, including for government officials and those who worked with the United States and allies. Taliban leaders have outlined an alternative, less repressive, picture of their rule compared to the last time they were in power in the 1990s. These statements suggest the Taliban want to avoid being globally isolated, and desire international investment and economic development. Still, the thousands of Afghans who tried to reach the airport or the borders with Pakistan and Iran suggest that many there are skeptical of such promises.

Prospects for those who desire to leave are dim. The Taliban control the land borders and are restricting those leaving to a trickle. According to news reports, Pakistan may not permit Afghans to cross and add to the already large number of refugees there. Turkey and some European countries are taking steps to keep Afghans from reaching their borders. Iran is already talking about repatriation.

For those who do go back, or are sent back, there are few measures of their quality of life. In many cases, re-crossing the border may mean being now internally displaced within Afghanistan.

In short, any new wave of displacement will add to the already staggering numbers of Afghanistan’s refugees and internally displaced persons—and those numbers will remain high for a long time. To avoid exacerbating the existing humanitarian crisis, the global community will have to take swift action, including close coordination with regional and national players.

In the United States, the leading concern has been the resettlement of Afghans who worked with the United States and allies through the Special Immigrant Visa (SIV) and other programs. This is a critical step but will have a minimal effect on overall refugee or IDP numbers. Estimates suggest that around 20,000 individuals and their households (50,000 to 80,000 individuals) may be SIV eligible, but the program has been fraught with processing delays because of COVID-19 restrictions and staffing shortages. The United States negotiated a deal to fly evacuees temporarily to Qatar and other countries, speeding up the process with the aim of getting many more out of harm’s way while their cases are being processed.

The UK and Canada have each agreed to resettle 20,000 refugees and Germany has pledged to resettle 10,000, but the timeline for doing so remains uncertain. On the other hand, other countries in the EU and Australia have expressed little desire to resettle refugees. Overall, it is unlikely that this subset of resettlement plans will alter the larger trajectory of displacement.

Furthermore, the Taliban will inherit a crisis of internally displaced people that they will have to manage on their own. There is a risk that aid groups will pull out their staff because of security fears. Even if they stay, they may face troubles with their supply chains, struggle to purchase goods, or be otherwise outmatched by the level of need.

The majority of Afghan refugees are located in Pakistan and Iran. But in both countries, refugees are seen as an economic burden rather than an opportunity. Many are denied the ability to pursue education, work, and even access to healthcare. News reports suggest there is considerable internal political pressure to deny refugees rights typically afforded to citizens, such as the ability to work or access public services, and there are worries about COVID-19 spreading in crowded camps. There are past reports of forced return or expulsion, and further flows could exacerbate these tensions. In the past two decades, some five million Afghan refugees have returned to Afghanistan. But our study found that the vast majority of any returns that happen take place within five years of when a conflict ends, and then dwindle. This, along with the United Nation’s no return advisory, mean that remaining refugees have very slim prospects of ever returning to Afghanistan.

In truth, allowing refugees opportunities to earn a livelihood may be one of the most effective ways to improve their self-reliance and living standards. Our work on developing mutually beneficial economic opportunities for Syrian refugees and host country communities found some advantages to this approach. Colombia is experimenting with this model, granting Venezuelan refugees the right to legally work and support themselves, which also helps the country’s agricultural labor shortage. The international community could incentivize refugee-hosting countries to create such economic opportunities through investments or other means.

The best solution, of course, is to prevent people from being displaced in the first place. On that, the question is whether the Taliban recognizes what is in its self-interest.  If, as promised, they bring stability and economic development to Afghanistan through international cooperation, that may be the best way to stave off an even bigger humanitarian disaster. Should the Taliban roll back all the gains that Afghan women have made, govern from fear rather than legitimate representation and deny freedom of expression and the press, that will drive an exodus of their human capital and thwart their ability to develop the country.

Can the international community hold the Taliban accountable? While U.S. leverage has declined with the military pullout, the United States could work with NATO allies or Gulf partners such as Qatar, which were hosts to Taliban leadership and the peace negotiations, to press the Taliban to honor their commitments and respect humanitarian norms. Much also depends on what China, Russia, and Iran choose to do. But a mutual interest in regional stability may provide a baseline, if limited, set of points to agree on. Iran certainly shares an interest in not having more Afghan refugees flee over its border.

The alternative is a sad scenario in everyone's eyes: Hundreds of thousands more people could flee and then live in squalid camps for decades, while options for resettlement to another country, return to Afghanistan, or getting citizenship in Pakistan or Iran are just minuscule. The window to address the situation is short. Longer periods of displacement without solutions harm refugees and their families, but also their home country, host country, and the international community as a whole.