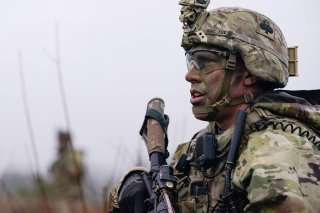 The prominent emergence of AI has in some ways underscored the uniquely dynamic and indispensable qualities of human cognition, if even in a paradoxical way. While AI can process information and perform an increasing range of functions by analyzing and organizing data, Army technology developers consistently emphasize that humans need to remain the ultimate decision-makers when it comes to command and control. Therefore, current Army developers explain that AI can assist, or inform human decision makers by analyzing data, presenting options quickly and performing otherwise overly complex, time consuming or impossible tasks...in seconds. AI, the Army thinking goes, will “assist,” but not replace, human cognition and its many decision-making faculties.

The progress of AI is, significantly, characterized by a paradox or what might be called a contradiction of sorts. As far as it is going—and the lightning speed at which it is getting there—there are still many unknowns when it comes to replicating human brain functions. Senior scientists at the Army Research Laboratory say that, broadly speaking the functional structure of many AI systems are based somewhat on the vision of mammals; there are biological processes and a certain natural apparatus for receiving and organizing information which computer systems are being engineered to replicate. While this seems both vast and amazing, ARL scientists explain that mammalian vision systems are just one part of the vast and still largely mysterious or unknown functions of the human brain. What about the portions of human cognition that imagine? Certain kinds of creativity? Or the many neurological dimensions to human feeling? Perhaps these questions are part of why the Commander of Army Futures Command, Gen. John Murray, and other service technology leaders emphasize that “humans” must ultimately be making important decisions and in control of “command and control” systems.

After all, despite the promise and magic of AI, aren’t there limits to what mathematically-driven computer systems can capture? What about more subjective phenomena such as feelings, imagination, moral sensibilities or other less quantifiable variables associated with human perception? Interestingly, advanced developers are looking at using AI to assess some more subjective nuances—such as looking at speech patterns, behavior history and the impact of external stimuli to determine human intention. However, despite this progress, it does not seem like many elements of the complex tapestry of human psychology lend themselves to any type of reliable mathematically-oriented computer analysis—at least not today.

These kinds of challenges, and advantages, associated with AI are familiar to senior Army weapons developers, such as Murray. Perhaps these complexities relate to why future war will be characterized by what Murray calls a “hyperactive battlefield”—a chaotic, fast-moving mix of complex variables in need of instant analysis as lives and combat victory hang in a delicate, hazy balance of uncertainty.

Quite simply put—outcomes in future wars will likely be determined by the “speed” of decision making. This phenomenon, referred to by Gen. John Murray, Army Futures Command, in an interview with Warrior, underscores some of the reasons why weapons developers are weaving Artificial Intelligence applications into nearly all major future systems.

“The ability to see, understand, decide and act faster than an adversary in what is going to be a very hyperactive battlefield in the future I think would be number one when it comes to the fast application of AI,” Murray said.

While Murray was clear to point out that there are some limitations and needed guidelines associated with AI-focused technologies, he did explain that fast-evolving uses of AI-empowered weapons systems can enable Army Commanders to… “see first, decide first, act first,” of course therefore destroying enemies faster. Essentially, AI-processed data can exponentially increase the speed at which humans can make decisions.

“There was a guy named John Boyd in the Air Force who came up with this concept called the OODA Loop, which means Observe Orient Detect and Act... if you can observe and get inside the OODA Loop of your adversary that means you can get to understanding and action faster. I actually think that is a great way to look at what I believe is the most logical and valuable use of AI for military applications,” Murray said.

A quick look across the Army’s portfolio of current high-priority modernization programs immediately reveals that, essentially, “all” of them are being developed with a mind to how AI will improve and impact performance; Army development of future combat vehicles, aircraft, long-range fires, infantry combat and of course warfare networks are all now being integrated with AI-related technologies. Future armored vehicles will use AI to operate small fleets of nearby robotic platforms, soldier-worn sensors will gather and network targeting data across dismounted units in seconds and aerial nodes will aggregate, organize and share relevant surveillance video using machine-learning algorithms.