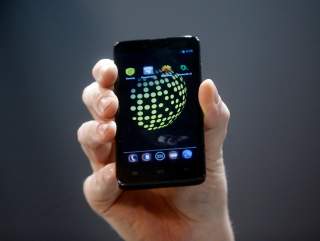 Key point: Militaries innovate to find solutions to problems. In this case, rather than inventing a new high-tech data system, the USAF successfully repurposed the open-source Andriod system.

Since the 2000s, militaries have experimented with wearable computers and displays in a variety of locations in “Future Soldier” programs. Generally, the purpose of these devices was to allow soldiers to easily locate friendly forces and mark the positions of suspected enemies, reducing friendly fire and allowing for easier tactical maneuver. However, most of these have been unsuccessful, being too bulky, power-hungry or incompatible with existing architecture to stick.

But in 2010, a U.S. Air Force Research Laboratory team decided to leverage the open-source, multi-device compatible nature of the Android operating system to create a geospatial app for the teams on the ground. Called the Android Tactical Assault Kit, or ATAK, this piece of software has gone on to become the preferred app of American tactical teams across most branches.

ATAK at its heart is a map application that shares data across a local network. Map and locational data, along with regular text, voice, video, video streaming and image data can be shared from user to user through the app. As most android devices are equipped with a GPS receiver, ATAK is also useful as a regular navigation and orienteering app.

In many ways, ATAK resembles the U.S. military’s FBCB2 system (which also shares ATAK/Android’s Linux roots) scaled down to the squad level, as it allows for the infantry soldier to keep track of the position of other friendly infantry—a capability FBCB2 gives mostly for vehicles.

ATAK also provides a fairly wide variety of map tools, driven by the feedback of its users. These include the ability to see elevation along a planned route, the ability to measure distances to locations on the map and the ability to overlay graphics over the map as layers. All of these are fairly advanced features, which while common in the civilian world were something military navigational devices often lacked. ATAK also includes targeting and runway survey features in its military version, which allows for observers and reconnaissance troops to work more efficiently.

While ATAK is compatible with a wide range of devices, the small form factor of a modern smartphone running Android is probably another reason for ATAK’s popularity. Special operations troops are often spotted with a rectangular mount on their body armor above their magazines. This is a fold-down mount for an Android phone running ATAK, which is often all that is needed to operate effectively with it. This stands in contrast to the bulky, wired up wearable computers that were in earlier future soldier programs.

ATAK has even seen use in civil and law enforcement applications, under the less aggressive name “Android Team Awareness Kit.” The same team communications, navigation and mapping capabilities are useful in many outdoor jobs, including wildlife surveys, forestry and geology. ATAK’s ease of use is a large factor in its widespread adoption, tactical units in the Department of Homeland Security were able to get most troopers trained on basic functionality within five minutes.

ATAK is rare in that it’s a Department of Defense software program that has achieved wild success while mostly sticking to its original budget. While the use of commercial off-the-shelf hardware and software has seen a spotty record across the military, the ATAK program shows what can happen when it’s done right. The powerful yet flexible nature of the Android operating system paired with a responsive development team has produced a product that’s not only been very successful in the military, but licensed out into to civilian companies as well.