How Al-Baghdadi's Death Will Change the Terrorism of Tomorrow 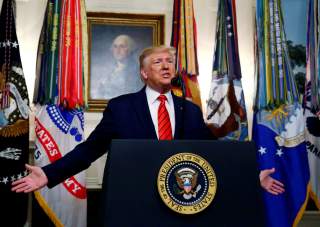 Key point: The death of the leader of ISIS is a blow but not one that will put an end to terrorism for good.

On 27 October, President Donald Trump announced that on the previous night US special forces had raided a compound in Barisha, Idlib Province, Syria. In the house was Abu Bakr al-Baghdadi, who detonated a suicide vest to avoid capture, killing himself and three of his children.

It seems that Idlib has become a centre for many Salafi-jihadists. The province has seen a massive population growth as people look for some semblance of security and stability, which depends in part on a ceasefire overseen by the Russians.

The president thanked the Russian, Iraqi, Syrian and Turkish governments as well as the Syrian Kurdish forces for their assistance in the demise of al-Baghdadi.

On Sunday, Islamic State suffered further losses when US Hellfire missiles successfully targeted Abu al-Hassan al-Muhajir, the group’s spokesman since 2016. Muhajir was killed in the village of Ayn al-Bayda, near Jarablus, Aleppo Province.

It’s useful to take stock of what al-Baghdadi’s death means to IS but also to the global Salafi-jihadi campaign. It seems that IS had been preparing for this day since the fall of the caliphate, if not before (on 7 August, for example, Amaq, an IS-affiliated news agency, reported that al-Baghdadi had appointed Abdullah Qardash as his successor, though it’s been suggested that the report was based on false information). In his video message of 29 April, al-Baghdadi is seen with what appears to be a suicide vest next to his weapon, which indicates that he wasn’t intending to be taken alive.

Beyond the symbolism of losing its leader, IS is unlikely to be affected. It’s unclear how much command and control al-Baghdadi had over the group after the collapse of the caliphate, as he’s been on the run.

Over the past two years, IS shifted its organisational structure by becoming a franchisor, which meant that the franchisees carried out operations, often independently of the IS leadership. US officials shared that opinion, noting that in the post-caliphate period the top leadership was issuing broad guidance, as opposed to day-to-day directions. Hassan Abu Hanieh, a Jordanian expert on extremist groups, supports this view.

In the next few days, if IS confirms the death of al-Baghdadi, the IS Shura will likely name a new leader.

The more interesting implications of al-Baghdadi’s death begin with what was he doing in Idlib. The area is associated with IS’s opponents—the larger al-Qaeda-linked organisation Hayat Tahrir al-Sham, formerly the Nusra Front. One important group that has emerged in the area since 2018 is Hurras al-Din (the ‘Guardians of Religion’), an al-Qaeda-affiliated organisation formed by Abu al-Qassam (aka Khalid al-Aruri), a close friend of Ahmed Abdullah (aka Abu Muhammad Al-Masri) and Saif al-Adel. In 2015, the three were released from prison by the Iranians, after which they travelled to Syria, forming all sorts of jihadi groups.

Abdullah and al-Adel are close to Ayman al-Zawahiri, the leader of al-Qaeda; both were allegedly involved in the 1998 East Africa bombings. Al-Aruri was close to IS’s spiritual founder, Abu Musab al-Zarqawi. Reports indicate that al-Baghdadi was staying with Abu Mohammed al-Halabi, one of the leaders of Hurras al-Din. The fact that al-Aruri and al-Halabi are involved raises some interesting issues.

Zawahiri has shown himself to be a careful strategist who is in for the long game, and he may be looking first to a possible consolidation with IS. This doesn’t mean amalgamation, as there’s too much bad blood between the two groups. However, there is a possibility of a sort of a hudna (‘calmness’, though it is often understood to mean a ceasefire), as the two networks spend too much time, treasure and resources fighting each other, and in doing so inflict a lot of damage on local populations.

In August, al-Adel released a statement noting that the enemies of the jihadis were trying ‘to exterminate any organization working to return Islam to its fundamentals and Turkey and others will not accept anything other than that’, adding that the mujahidin ‘must once again change the military theory to one that fits the situation and will succeed against the conspiracies of the enemies and against the Turkish program that the factions have agreed with’.

Zawahiri is 68 years old and is rumoured to have a serious ‘heart complaint’. It’s therefore likely that he’s thinking about the next generation and how to continue the Salafi-jihadi franchise, which requires money and new disciples. Those are things that IS has been very effective in developing, and the group reportedly still has access to US$50–300 million and many foreign fighters. Zawahiri undoubtedly noticed IS’s latest propaganda campaign, ‘And the Best Outcome Is for the Pious’, which saw Salafi-jihadis from around the world renew their oaths of loyalty to al-Baghdadi.

Edmund Fitton-Brown, a top UN counterterrorism official, recently said that Zawahiri might be looking to northeast Syria as a potential centre from which to launch international terrorism. This is also why the presence of Hurras al-Din might be significant, as the group supposedly relies on between 1,500 and 2,000 fighters from many places. The key to Zawahiri’s strategy has been to unite local and international issues, while ensuring that the domestic takes precedence, which may become easier now that IS will be led by someone new.

Al-Baghdadi’s death may be a blow to IS, but it will also be an opportunity for the group to explore a new strategy, which could include moving away from the need to establish a caliphate. That would obviate the need to designate Baghdadi’s successor as caliph—a cumbersome process that also narrows the pool of candidates. Undoubtedly the US-led decapitation program is causing havoc, but it also means that we could soon be seeing a new campaign by IS.

This article by Isaac Kfir first appeared in the Australian Strategic Policy Insitute’s The Strategist in 2019.

Isaac Kfir is the deputy director of the defence, strategy and national security program and head of the counterterrorism program at ASPI.