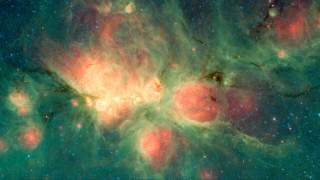 It is 1950 and a group of scientists are walking to lunch against the majestic backdrop of the Rocky Mountains. They are about to have a conversation that will become scientific legend. The scientists are at the Los Alamos Ranch School, the site for the Manhattan Project, where each of the group has lately played their part in ushering in the atomic age.

They are laughing about a recent cartoon in the New Yorker offering an unlikely explanation for a slew of missing public trash cans across New York City. The cartoon had depicted “little green men” (complete with antenna and guileless smiles) having stolen the bins, assiduously unloading them from their flying saucer.

By the time the party of nuclear scientists sits down to lunch, within the mess hall of a grand log cabin, one of their number turns the conversation to matters more serious. “Where, then, is everybody?”, he asks. They all know that he is talking – sincerely – about extraterrestrials.

The question, which was posed by Enrico Fermi and is now known as Fermi’s Paradox, has chilling implications.

Bin-stealing UFOs notwithstanding, humanity still hasn’t found any evidence of intelligent activity among the stars. Not a single feat of “astro-engineering”, no visible superstructures, not one space-faring empire, not even a radio transmission. It has been argued that the eerie silence from the sky above may well tell us something ominous about the future course of our own civilisation.

Such fears are ramping up. Last year, the astrophysicist Adam Frank implored an audience at Google that we see climate change – and the newly baptised geological age of the Anthropocene – against this cosmological backdrop. The Anthropocene refers to the effects of humanity’s energy-intensive activities upon Earth. Could it be that we do not see evidence of space-faring galactic civilisations because, due to resource exhaustion and subsequent climate collapse, none of them ever get that far? If so, why should we be any different?

A few months after Frank’s talk, in October 2018, the Intergovernmental Panel on Climate Change’s update on global warming caused a stir. It predicted a sombre future if we do not decarbonise. And in May, amid Extinction Rebellion’s protests, a new climate report upped the ante, warning: “Human life on earth may be on the way to extinction.”

Meanwhile, NASA has been publishing press releases about an asteroid set to hit New York within a month. This is, of course, a dress rehearsal: part of a “stress test” designed to simulate responses to such a catastrophe. NASA is obviously fairly worried by the prospect of such a disaster event – such simulations are costly.

Space tech Elon Musk has also been relaying his fears about artificial intelligence to YouTube audiences of tens of millions. He and others worry that the ability for AI systems to rewrite and self-improve themselves may trigger a sudden runaway process, or “intelligence explosion”, that will leave us far behind – an artificial superintelligence need not even be intentionally malicious in order to accidentally wipe us out.

In 2015, Musk donated to Oxford’s Future of Humanity Institute, headed up by transhumanist Nick Bostrom. Nestled within the university’s medieval spires, Bostrom’s institute scrutinises the long-term fate of humanity and the perils we face at a truly cosmic scale, examining the risks of things such as climate, asteroids and AI. It also looks into less well-publicised issues. Universe destroying physics experiments, gamma-ray bursts, planet-consuming nanotechnology and exploding supernovae have all come under its gaze.

So it would seem that humanity is becoming more and more concerned with portents of human extinction. As a global community, we are increasingly conversant with increasingly severe futures. Something is in the air.

But this tendency is not actually exclusive to the post-atomic age: our growing concern about extinction has a history. We have been becoming more and more worried for our future for quite some time now. My PhD research tells the story of how this began. No one has yet told this story, yet I feel it is an important one for our present moment.

I wanted to find out how current projects, such as the Future of Humanity Institute, emerge as offshoots and continuations of an ongoing project of “enlightenment” that we first set ourselves over two centuries ago. Recalling how we first came to care for our future helps reaffirm why we should continue to care today.

In 1816, something was also in the air. It was a 100-megaton sulfate aerosol layer. Girdling the planet, it was made up of material thrown into the stratosphere by the eruption of Mount Tambora, in Indonesia, the previous year. It was one of the biggest volcanic eruptions since civilisation emerged during the Holocene.

Almost blotting out the sun, Tambora’s fallout caused a global cascade of harvest collapse, mass famine, cholera outbreak and geopolitical instability. And it also provoked the first popular fictional depictions of human extinction. These came from a troupe of writers including Lord Byron, Mary Shelley and Percy Shelley.

The group had been holidaying together in Switzerland when titanic thunderstorms, caused by Tambora’s climate perturbations, trapped them inside their villa. Here they discussed humanity’s long-term prospects.

Clearly inspired by these conversations and by 1816’s hellish weather, Byron immediately set to work on a poem entitled “Darkness”. It imagines what would happen if our sun died:

I had a dream, which was not all a dream
The bright sun was extinguish’d, and the stars
Did wander darkling in the eternal space
Rayless, and pathless, and the icy earth
Swung blind and blackening in the moonless air

Detailing the ensuing sterilisation of our biosphere, it caused a stir. And almost 150 years later, against the backdrop of escalating Cold War tensions, the Bulletin for Atomic Scientists again called upon Byron’s poem to illustrate the severity of nuclear winter.

Two years later, Mary Shelley’s Frankenstein (perhaps the first book on synthetic biology) refers to the potential for the lab-born monster to outbreed and exterminate Homo sapiens as a competing species. By 1826, Mary went on to publish The Last Man. This was the first full-length novel on human extinction, depicted here at the hands of pandemic pathogen.

Beyond these speculative fictions, other writers and thinkers had already discussed such threats. Samuel Taylor Coleridge, in 1811, daydreamed in his private notebooks about our planet being “scorched by a close comet and still rolling on – cities men-less, channels riverless, five mile deep”. In 1798, Mary Shelley’s father, the political thinker William Godwin, queried whether our species would “continue forever”?

While just a few years earlier, Immanuel Kant had pessimistically proclaimed that global peace may be achieved “only in the vast graveyard of the human race”. He would, soon after, worry about a descendent offshoot of humanity becoming more intelligent and pushing us aside.

Earlier still, in 1754, philosopher David Hume had declared that “man, equally with every animal and vegetable, will partake” in extinction. Godwin noted that “some of the profoundest enquirers” had lately become concerned with “the extinction of our species”.

In 1816, against the backdrop of Tambora’s glowering skies, a newspaper article drew attention to this growing murmur. It listed numerous extinction threats. From global refrigeration to rising oceans to planetary conflagration, it spotlighted the new scientific concern for human extinction. The “probability of such a disaster is daily increasing”, the article glibly noted. Not without chagrin, it closed by stating: “Here, then, is a very rational end of the world!”

Before this, we thought the universe was busy

So if people first started worrying about human extinction in the 18th century, where was the notion beforehand? There is enough apocalypse in scripture to last until judgement day, surely. But extinction has nothing to do with apocalypse. The two ideas are utterly different, even contradictory.

For a start, apocalyptic prophecies are designed to reveal the ultimate moral meaning of things. It’s in the name: apocalypse means revelation. Extinction, by direct contrast, reveals precisely nothing and this is because it instead predicts the end of meaning and morality itself – if there are no humans, there is nothing humanly meaningful left.

And this is precisely why extinction matters. Judgement day allows us to feel comfortable knowing that, in the end, the universe is ultimately in tune with what we call “justice”. Nothing was ever truly at stake. On the other hand, extinction alerts us to the fact that everything we hold dear has always been in jeopardy. In other words, everything is at stake.

Extinction was not much discussed before 1700 due to a background assumption, widespread prior to the Enlightenment, that it is the nature of the cosmos to be as full as moral value and worth as is possible. This, in turn, led people to assume that all other planets are populated with “living and thinking beings” exactly like us.

Although it only became a truly widely accepted fact after Copernicus and Kepler in the 16th and 17th centuries, the idea of plural worlds certainly dates back to antiquity, with intellectuals from Epicurus to Nicholas of Cusa proposing them to be inhabited with lifeforms similar to our own. And, in a cosmos that is infinitely populated with humanoid beings, such beings – and their values – can never fully go extinct.