How America Can Outcompete China in an Age of Global Pandemics 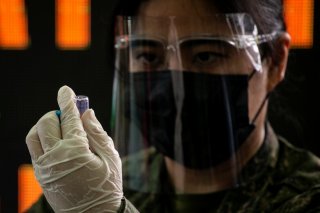 The United States is engaged in a fierce and enduring great power competition with China and Russia over shaping the world’s future security and economic architecture. The United States’ ability to perform effectively in this great competition, however, depends on how America manages its response to Covid-19 and future pandemics, and how quickly it can safely reopen its economy. Ending the pandemic quickly will allow the United States to reignite its economic vitality, advance its strategic interests competitively, and maintain its ability as a global superpower to offer a competing vision for the next fifty years and beyond.

Immunizing young adults and the working-age population—the primary source of human-to-human transmission—at the same time as the elderly— is one possible approach to quickly ending the Covid-19 pandemic. This is supported by new data showing that immunized individuals are far less likely to transmit the virus to other humans. Continuation of the pandemic and any further delay in reopening the economy is certain to hurt the United States’ long-term economic growth, among other things. It also impacts America’s ability to maintain a competitive edge in great power competition with China, Russia, and other strategic rivals.

Impacts of Covid-19 on National Security

Since the start of vaccinations almost three months ago, the campaign has thus far produced no relief from the surging mortality rate of Covid-19. This is evident in over 2.6 million global deaths, more than half a million of which are in the United States. As a result, schools and universities across America have been closed, thousands of small businesses shuttered, and private consumption expenditures have remained significantly low. This situation has resulted in a decline of the U.S. economy, massive unemployment, a Covid-fatigued and depressed population, a sharp decline in young Americans enrolling in and graduating from colleges, and a dramatic rise in Covid-induced suicides and adverse mental health conditions.

The impact has not left the future generation of Americans unscathed either. According to National Student Clearinghouse Research Center, freshman college enrollment in the U.S. declined by 4 percent or over half a million students in the fall of 2020—in public colleges alone. The most notable decline occurred in two-year college enrollment whose graduates provide for the majority of the middle-class economy in America. All of this translates into a gloomy long-term strategic impact on America’s national security. It accelerates the decline of America’s relative power vis-à-vis a rising China and other global strategic rivals. It also impacts the ability of the United States as a global superpower to offer a competing vision in leading the free world for the next several decades and beyond.

Managing pandemics rightly matters a great deal in this era of great power competition. To prove this point, a brief comparative discussion on the economic impacts of Covid-19 is necessary. According to the World Bank, U.S. GDP in 2020 declined by 2.3 percent after increasing from $20.58 trillion in 2018 to 21.433 trillion in 2019. Between those two normal years, the GDP had a net increase of $1.375 trillion. Furthermore, between 2010 and 2019, U.S. GDP gained a net positive increase of roughly $500 billion annually. If things stayed the same as the rest of the previous decade without a pandemic, by the end of 2020, the GDP should have increased to over $22 trillion. However, U.S. GDP in 2020 contracted by 2.3 percent to $20.93 trillion. That is a loss of over $2 trillion in just one year of pandemic. If the economy does not reopen for another year, the U.S. GDP would incur an estimated total of $5 trillion—$8 trillion losses.

In contrast, China’s GDP for 2020 expanded by 2.3 percent—the only major economy in the world to register positive growth. In 2010, China’s GDP stood at roughly $6 trillion. At the end of 2020, it had expanded to a whopping $14.7 trillion. Over a span of just 10 years, China increased its Gross Domestic Product by almost $9 trillion compared to the United States’ $5 trillion increase over the same period, which is a sign that China will soon become the largest economy in the world. With the U.S. economy declining in 2020 due to Covid-19 closures, analysts predict that China will surpass the United States as the number one economy in the world as early as 2026 or as late as 2030. In this context, Covid-induced contraction in the GDP of the United States and the continued expansion of China’s GDP points to an impending tectonic shift in the balance of power in the world. This reality has serious strategic implications for U.S. national security, its standing in the world as a global superpower, and for the rules-based international system and global order.

In the aftermath of the collapse of the Soviet Union in late 1991, the United States emerged as a singular superpower in the world. Accordingly, America enjoyed a brief moment of unipolarity—roughly for about two decades—where the United States was the only preeminent global superpower in the international system following the end of the Cold War. America’s moment of unipolarity continued well into the 2000s until increased globalization inevitably gave way to an age of multipolarity and the return of great power competition in which China, Russia, India, Brazil, and the European Union became prominent regional powerhouses.

China’s persistent rise even in the context of Covid-19 closures, however, is of particular interest. In the 1980s, China started implementing a series of market-oriented economic reforms. Over the course of the next several decades, these reforms resulted in not only lifting more than 500 million Chinese out of poverty; they also helped the country become an economic juggernaut and a strategic competitor to the United States and the European Union some thirty years later. In 2020, when the world, including the United States, shut down due to Covid-19 and suffered substantial economic losses and negative GDP growth rates, China was the only major economy that was able to actually expand its GDP. Covid-forced business closures in the United States could not have come at a worse time when China’s rise has been surging even in the face of a deadly pandemic. This ominous duality espouses the real potential to not only accelerate the decline of U.S. relative power vis-à-vis China, but also to tilt the balance of power toward the Chinese by 2040 where Asia will represent the largest share of global economic production and income generation. In that scenario, whether China respects the rules-based international system—or attempts to completely dismantle the system to reshape it in its favor—is the real long-term strategic concern to U.S. international security interests and the global order.

Between Chinese Strategy and Russian Adventurism

The United States will be engaged in fierce competition with China and Russia for a long time into the future. Covid-19 must not be allowed to cause America to falter in that great competition—in any way—anywhere in the world. The best way to prepare for that competition is to end the pandemic quickly and revitalize the U.S. economy. A thriving economy will ensure that America has the right tools to outcompete its rivals. Since the break-up of the Soviet Union, China is, in fact, the most formidable rival the United States has had to deal with. In a speech at the 2021 Virtual Munich Security Conference earlier in February, President Joe Biden stated that “competition with China is going to be stiff…we must prepare together for long-term strategic competition with China.” President Biden also warned that Russia was trying to “weaken the NATO alliance and undermine the transatlantic unity.”

In fact, that fierce strategic competition has already been in play. Since Vladimir Putin became president, Russia has been deploying hard power to restore its great power status in the world. It is evident in Russia’s annexation of Crimea in 2014, its efforts to weaken the European Union, and in its growing forward-deployed military presence in the Arctic. China, however, is taking a much longer-term, deliberate approach through soft power under a broader grand strategy. Scheduled to come to full fruition by 2049—the centennial anniversary of the founding of the Chinese Communist Party—that grand strategy is China’s Belt and Road Initiative (BRI): A massive, intercontinental infrastructure development project that China launched in 2013. The BRI originates from China, expands into almost all of the Asian continent to include the old silk road in Central Asia, East Asia, the Middle East, and South Asia; Africa; Central and Eastern Europe; and then circles back to China.

When the pandemic started, China immediately activated its “Health Silk Road” initiative—a Covid-era adaptation of the BRI under which China has been sending medical supplies (masks, gloves, PPEs) and Covid-19 vaccines to the developing world including Mexico and Latin America as well as some European countries. This has given China a perfect opportunity to project a narrative that the BRI is, indeed, a well-meaning infrastructure development project designed to enhance “regional connectivity and embrace a brighter future.” However, the BRI is China’s soft power-based grand strategy that attempts to advance a future Chinese expansionist foreign policy by building and buying a network of alliances and partnerships throughout the three continents of Asia, Africa, and Europe. In a sense, the BRI is China’s long-term strategy of shifting the balance of power away from the United States toward China.

Coronavirus Outbreak in China Could Have Come from Snakes