How Armenia Has Navigated the Coronavirus Pandemic—Despite Azerbaijan 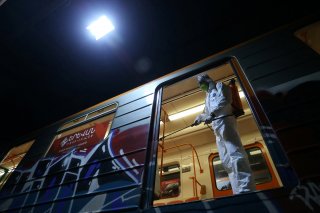 The coronavirus has tested the resilience and unity of nations large and small, rich and poor, with wealth and technological advancement providing little if any guarantee of protection. Thousands of miles away from the United States, the small and landlocked Armenia was on a path to solid economic progress fueled by its democratic transition a year and a half ago when the coronavirus struck.

Social-distancing and economic slowdown, followed by the suspension of commercial flights and most cross-border traffic, put a heavy toll on our economy, especially on some of its more rapidly growing sectors⁠—services, tourism, and agricultural exports. Nationwide stay-at-home orders, a mandatory wearing of masks, expanded testing and contact tracing, along with an increased hospital bed capacity and public awareness⁠—all helped fight the pandemic. Armenia is moving slowly toward reopening its economy. Commercial flights will soon resume, and the country looks forward to regaining its economic momentum.

But battling the health and economic challenges created by the coronavirus is not the only test our country faces. Armenia is in a region where history, cultural diversity, and modern politics come together to form geopolitical and regional fault lines that can produce conflict if ignored or mishandled.

The Caucasus is situated on a geographic crossroads, a nexus where Europe, Asia, and the Middle East come together, a region prone to wider geopolitical competition.  Armenia conducts a balanced, multifaceted foreign and security policy to address and mitigate this challenge, to reduce violence and project stability. This inclusive vision allows us to pursue critical partnerships and alliances with the United States, Russia, and the European Union, as well as other regional parties and frameworks.

Maintaining a strong relationship with the United States is particularly important for Armenia, for reasons related both to our security and our values. Armenia and the United States may be continents apart, but what we share in common—in values, ideals, aspirations, and the unique human bond with almost every Armenian citizen having a relative or friend who is American—is many times stronger than our disparate geography.

One of my first efforts after arriving in Washington as Armenia’s ambassador, was to work with the U.S. government to launch the U.S.-Armenia strategic dialogue—the framework for our growing relationship that includes policy, trade, energy, technology, defense, civil society, and humanitarian issues. The United States provides critical development aid Armenia that over the quarter of a century has helped us strengthen our economy and build a strong civil society—two key catalysts of the democratic change Armenia underwent recently.

We also face an even more immediate danger: military aggression from our neighbor, Azerbaijan, which sees Armenia’s democratic transformation as a threat rather than a model and has been posturing to wage a war on Armenia and Nagorno-Karabakh. Azerbaijan’s defense ministry recently threatened to take “measures that will be far more destructive than those taken in 2015, 2016, and 2018” and that “the enemy will suffer extensive losses” because “the only language to speak with the enemy is the language of force.”

Even as the UN secretary-general has pleaded for a global cessation of hostilities amidst this unprecedented health crisis, Azerbaijan has chosen to escalate its war rhetoric against Armenia and Nagorno-Karabakh or Artsakh, which declared its independence in 1991 amid the disintegration of the Soviet Union and successfully defended it from a military aggression of Azerbaijan.

In the latest evidence of belligerence, our neighbor held large-scale military exercises just last month in the midst of the pandemic. These actions proved alarming enough to lead a bipartisan group of members of Congress to condemn these actions as “dangerous” and “reckless.” It seems that the Aliyev regime, so used to bullying and menacing its own citizens with no regard to their basic rights, thinks that it can intimidate Armenia and Nagorno-Karabakh as well.

By contrast, Armenia remains firmly committed to the peace process even as it engages in an urgent nationwide fight against the pandemic. It has sought to revitalize the process by urging the return of Nagorno-Karabakh to the negotiating table—a role it already once held in the mid-1990s. Nagorno-Karabakh’s presence in negotiations was critical in enabling the ceasefire established in, and held since 1994, and will be critical today in converting it to a lasting peace.

Regrettably, anti-Armenian hate speech, coupled with warmongering and military provocations, have become tools in the hands of Azerbaijan’s leadership to distract its own peoples’ attention from worsening domestic problems. Such a position poses a threat not only to Artsakh and Armenia but to regional peace and security.

For almost three decades, the people of Artsakh have built their own democracy through fair and free elections, and pursued economic, social, and cultural development despite the constant threat of war. They understand that security and democracy are interconnected and that democratic societies are best positioned to peacefully resolve conflicts. Since proclaiming independence Artsakh has conducted six presidential and seven parliamentary elections, including a recent one that produced newly elected president and parliament.

Yet Azerbaijan rejects talking to representatives of Artsakh lest it legitimizes their rights. The international community does not have to be held hostage to one country’s intransigence and should engage with Nagorno-Karabakh, whether by supporting their democracy, providing international assistance to fight the coronavirus, or other challenges. After all, pandemics do not hold political preferences and human rights and democracies are not conditional upon the international status of the entity.

Our country can navigate through the storm of the coronavirus, protect our democracy, and defend ourselves, as well as the people of Artsakh against Azerbaijan’s threats. The sooner our neighbor realizes that the key to the resolution of the Nagorno-Karabakh conflict lies in the non-use of force and negotiations with Nagorno-Karabakh, the closer that resolution will be.  As we strive to bring forth that day, we encourage Azerbaijan to focus on the real needs of their people and the common threat that the region faces today—containing the spread of the coronavirus and its negative  social and economic impact.

Varuzhan Nersesyan became ambassador of Armenia to the United States on Jan. 11, 2019, having previously served as assistant to the Armenian prime minister since April 2018.