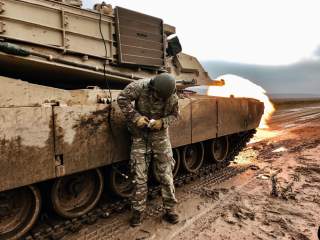 Currently, the U.S. Army is undergoing a transformation while preparing for Multi-Domain Operations and Large-Scale Combat Operations. These concepts include an axiom that describes U.S. forces as being “over-matched” by near-peer adversaries, such as China or Russia. In response, the US Army uses an acronym, DOTMLPF-P, to examine its Doctrine, Organization, Training, Materials, Leadership, Personnel, Facilities, and Policy to find a proper solution. Thus far, the U.S. Army has identified six major weapons programs it plans to acquire to close the gap. This article aims to add a key item to restore U.S. military supremacy on the battlefield: Culture. Specifically, a Warrior Culture.

To prepare for a looming confrontation with a heavily-equipped enemy, the U.S. Army should make fundamental changes to its warfighting concepts. To instill a Warrior Culture, the U.S. Army must push decisionmaking abilities down to the company level. This is in stark contrast to the Russian and Chinese armies, which retain critical decisions at the regimental level. As a follow-on result, the U.S. Army could unravel the enemy’s decisionmaking process by allowing its company commanders to thwart enemy plans at the outset of contact.

Initiating such a cultural change begins with a basic look at ourselves in our current state. Let’s begin with the 1st Cavalry Division, which is comprised of three Armored Brigade Combat Teams. These ABCTs are based on an official template, the Army’s Table of Organization and Equipment. So, this begs a question: what makes the 1st Cav Division’s ABCTs any different from another unit’s, say the 1st Armored Division? After all, the 1st Armored Division is also comprised of ABCTs that are arranged along the same order. Both are tank heavy divisions. If both divisions are made up of the same type of ABCTs, what’s the difference? Let’s take the challenge and build a more efficient Army.

Combat Authority at the Lowest Level

Combat is a stressful, chaotic affair. Throughout history, we can point to many examples of soldiers requesting specialized assistance in order to win a battle. To remedy this, the U.S. Army has fielded within the ABCT a Combined Arms Battalion, consisting of four maneuver companies (two mechanized infantry, and two tank companies). While a good start down the road of combined arms integration, it still left a tangible separation of forces. The infantry company still viewed tanks as “those guys (over there),” even though the armor company belongs to the same battalion as them. It gives the wrong perspective. Furthermore, to solicit help in reconnaissance, one would have to contact yet another unit: the cavalry squadron. The separation of duties has led to a series of almost-bureaucratic requests up and down the chain of command.

An examination of warfare in Iraq, Syria, and the Ukraine shows that organically pure units do not fare well in combat. To put it simply, Tanks need Infantry to root out the enemy; Infantry need Tanks for protection; both need Reconnaissance to gain the upper hand against an armed foe.

A combined arms company would have the ability to conduct its own reconnaissance and dispatch its own forces to deal with what has been discovered. A typical scenario looks like this: the recon platoon discovers an enemy armored formation; upon radioing the data in, the tank platoon is sent to attack the enemy, while the mortar section provides indirect fire to fix the enemy in position; the Bradley platoon is able to hold the ground at the end of the fight. The composition of a combined arms company allows the company commander the full range of integrated combat ops; he is able to handle the full spectrum of combat, without seeking external help.

The purpose of re-organizing down the company level is to eliminate any visage of “Us vs Them” thoughts. Having Infantry, Armor, and Indirect Fires all in the same company creates a cohesive team. There is an old adage that implies ‘a soldier fights and dies for those he knows’. Further, as the company trains together, they will be able to leverage one another’s abilities to the company’s advantage; a force multiplier effect. Keep in mind that there isn’t a Special Operations equivalent in the Armor community, so esprit-de-corps must be built around a self-sufficient armored force that can successfully face any circumstance.

At the Battalion Level

The reorganization of the ABCT will create three combined arms companies and one armor company within the battalion. The tank company (fourteen Abrams) therefore serves as the “Battalion’s Reserve Force” in case any of the combined arms companies gets into deep trouble. As a consequence of this reorganization, the Headquarters Company will no longer have a mortar section, since the mortars will have been pushed down to the company level. The Battalion Staff focuses on acquiring additional firepower, specifically aviation assets. Lastly, there is no change to the number of Abrams and Bradleys in the HHC (one and four respectively); it is conceivable but unlikely that these vehicles could be committed to decisive combat.

At the Brigade Level

The Brigade Combat Team would still consist of four battalions, but their roles would change. Three battalions will consist of combined arms companies, while the fourth battalion will consist of a small hybrid battalion (consisting of one armor company and two mechanized infantry companies), somewhat similar to a current Combined Arms Battalion. This “mixed” battalion is the result of keeping the total number of combat vehicles throughout the brigade the same, yet offers a small amount of organically pure Infantry and Armor capability. This last battalion would serve as the “Brigade’s Reserve Force” to occupy ground, or reinforce the other battalions as needed.

Moreover, an ABCT is currently assigned a Fires Battalion, consisting of eighteen 155mm self-propelled howitzers. These would be re-tasked to allow each of the four battalions to retain four tubes in Direct Support at all times. (Note: If the Brigade Reserve is not committed to the fight, the Brigade Commander would retain operational control of the remaining six artillery pieces.)

Administratively, an ABCT would retain its total number of combat vehicles (no force expansion or reduction is needed); it would also retain the same number of command slots, both at the company- and battalion-level. But relationships and roles would certainly change.

Warfare has rapidly changed over the last twenty years; it is fast-paced, with many threats lurking to interfere with U.S. military operations. As a nation, we must empower and grow our military officers to fully comprehend high-intensity combat operations. We must grow combined arms officers at the earliest opportunity. In our current force structure, this occurs at the field-grade level (when they are eligible for ‘career broadening’ assignments). The nation cannot wait that long.

We must educate our company commanders to incorporate combined arms during their formative years. This means selecting the best Infantry or Armor Captain to command a combined arms company; not simply the next officer in line. This would require a change of thought throughout the officer community. Competition in peacetime simply creates a better product. Imagine how effective such an officer would be when he reaches higher levels of command.

At the field-grade level, the competition would increase. Across the ABCT, the four battalions would serve different roles, particularly because the “Brigade’s Reserve Force” would be seen as a lesser command slot. Thus, a Brigade Commander would select his most stellar candidates for the newly reorganized battalions. But the end result is that the Battalion Commanders would be well-versed in tactical battlefield management, knowing when to commit a reserve force; that officer is a viable candidate for flag-level responsibilities.

A detailed review of the news media would reveal a narrative that the U.S. Army is ill-prepared for the next big war. As regional land powers, the Russian and Chinese armies have made great strides in ‘over-matching’ the U.S. Army; we can no longer presuppose superiority of our ground forces. In direct response to the threat, the U.S. Army must shift its paradigm of the Organization, Leadership, and Personnel domains to create more efficient use of its combat power. This requires a down-the-ranks adjustment of combat responsibilities.

The reorganization of the Armored Brigade Combat Teams to form combined arms companies would increase combat capability of each unit, providing the company commander the tools to defeat the enemy without requiring external support. Having operational control of Infantry, Armor, Reconnaissance, and Indirect Fires at his disposal, a company-grade officer would gain deeper insights how an Army should fight and win in combat; this would also make him a better leader in the future. To do this, the Army would have to depart from organically pure company-level units. This reorganization would also benefit senior commanders, giving them a Reserve Force, which was not previously available.