How the Army Wants to Protect Itself From Threats from Above 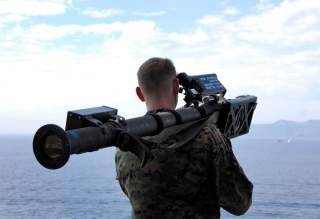 The modern battlefield is filled with aerial threats.

Soldiers face old threats like artillery and aircraft and new threats like cruise missiles and drones. In the early 2010s, the U.S. Army realized the inadequacy of its existing short-range air defense (SHORAD) against the threats of the modern battlefield. The United States was losing its “overmatch” capability, and fast.

During the early years of the conflicts in Iraq and Afghanistan, SHORAD systems were some of the lowest priority systems for the U.S. military. Since insurgents possessed practically no air force of any kind, air defense units were used as ersatz ground-support, or simply not deployed.

The radar of the Phalanx, originally designed to intercept anti-ship missiles, proved adept at detecting the smaller mortar and rocket projectiles, and the 20mm M61 Vulcan autocannon proved precise and quick enough to shoot down the incoming rounds. The 20mm's growl and the sparkle of the rounds self-destructing in the night sky would become the fireworks for many a grunt in Iraq and Afghanistan.

But from the outset, Phalanx C-RAM was a stopgap solution. The originally naval system was only deployable at static, built-up bases due to power requirements, and the 20mm cannon was relatively short ranged and ammo inefficient, requiring long bursts of hundreds of rounds in a single engagement.

Despite its drawbacks, Phalanx C-RAM potentially saved the lives of countless soldiers. The Army recognized the need for a similar capability in a different system and deemed that it was to be built into future SHORAD systems.

At the time, this new system was to be called Indirect Fire Protection Capability Increment 2-Intercept (IFPC Inc 2-I, or simply IFPC). The system also incorporated other conventional threats the Army expected to counter in the future. System capability was envisioned to be developed in three blocks.

IFPC eschewed the 20mm cannon of the CIWS in favor of a new “Multi-Mission Launcher” (MML), a 15-tube launcher that was envisioned to fire a variety of different interceptors depending on the target threat. The launcher was meant to be relatively static, mounted on an MTV truck. The launcher would receive data from local Sentinel radars, a new IFPC sensor (expected to reach maturity by Block 2), and from larger radars that are used with the Patriot missile (IBCS).

Perhaps the most innovative part of the multi-mission launcher was the wide variety of missiles it could fire. The MML could fire a modified version of the air-to-air AIM-9X missile, the FIM-92 Stinger, a new miniature hit-to-kill missile, a new low-cost active-radar seeker missile, Tamir interceptors from the Israeli Iron Dome system, and even AGM-114 Hellfire missiles, in a presumably surface-to-surface capacity.

The system would decide the appropriate weapon to use. Smaller targets might only require a miniature hit-to-kill missile, several of which could be packed into a single launch tube. Larger targets or those at further range might be engaged with an AIM-9X missile.

However, in January 2019, the date at which the MML and IFPC were supposed to reach initial operating capability, the US military opted to buy the Israeli Iron Dome interceptor as an interim solution to cruise missiles, UAS, and RAM threats. The Iron Dome system is also said to be under consideration as a full solution for the Army’s IFPC program, which would lead to its integration with Patriot IBCS.

The selection of Iron Dome as an interim solution is a significant drawback for the Army’s own IFPC program. The Iron Dome launcher, while similar in appearance, only supports the Tamir interceptors, rendering it less versatile than MML. However, the launcher does have twenty tubes to MML’s fifteen.

Also gone is the American Sentinel radar and possibly the IFPC Block 2 sensor. Israeli ELM-2048 radars will be acquired along with the Iron Dome launchers, as integrating the American radars would take too much time.

While the Iron Dome system is a good system that is ready now, perhaps the Army shouldn’t abandon the American IFPC. The lower cost and more numerous miniature hit-to-kill missile could prove more cost-effective against smaller UAS, especially in a swarm.

The American system also provides commanders with the option to pack a small offensive capability in their launcher. The radar on the Phalanx C-RAM was often used as a counter battery radar, guiding return fire or ground troops to the mortar launch location. Putting an offensive missile in the launcher to shoot immediately at a launch site immediately after a successful interception could give the enemy less time to react and pack up.