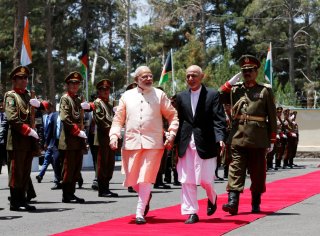 Over the last two decades, New Delhi earned tremendous goodwill in Afghanistan by making massive investments in economic development, reconstruction, and humanitarian assistance. However, India’s goodwill rests on the fact that India never put its troops on the ground. Instead, India chose to rely on the continued presence of the U.S. military and intelligence establishment to take care of the overall security situation. Hence, no significant efforts were made to cultivate proxies, establish intelligence networks, or communication channels with the Taliban. Now with the U.S. withdrawal, India’s make-believe clout is expected to vanish as fast as the winds of the Taliban’s Islamist upsurge will sweep the current regime in Kabul, leaving India vulnerable, isolated, and pondering over the rationale of its two-decades-long investment.

After some initial skepticism, the U.S. military and Central Intelligence Agency now agree that post-U.S. withdrawal, the Afghan government will have immense difficulties holding on to power. Experts suggest that with 85,000 full-time fighters, the Taliban controls one-fifth of the country’s territory—primarily the rural areas—and is fast closing in on significant cities and provincial capitals. According to Bill Roggio, Senior Fellow with the Foundation for Defense of Democracies, the Taliban has doubled its territory since 2018. In recent battles, Afghan security forces are collapsing and fleeing even without a fight. Hence, stability seems a distant scenario, and the Taliban’s success in its bid to capture power appears the most likely scenario.

India has a troubled history with the Taliban. In the early 1990s, India supported the Northern Alliance against the Pakistan-supported Taliban. When the Taliban came to power in 1996, Afghanistan became a fertile and favorable ground for Pakistan to run terror camps and divert the jihadis to Kashmir. As a result, from 1995 onwards, there was a sizable influx of Afghan jihadis in Kashmir. They generally occupied commanding positions because of their better training, fighting skills, religious fervor, and robust ties with Pakistan’s security establishment. In 1999, Indian airliner IC-814 was hijacked and stationed at Kandahar under the patronage of the Taliban and Pakistani security establishment. It is widely believed that the team of Indian negotiators, who went to Kandahar, were negotiating with Pakistani Inter-Services Intelligence (ISI) operatives who were continuously guiding the hijackers. Reportedly, the Pakistan-sponsored Kashmir-centric terrorist groups like Lashkar-e-Taiba, Jaish-e-Mohammed, and Hizbul Mujahidin have deep ties with the Taliban and other terror outfits like the Haqqani network, Al Qaeda, and Islamic State-Khorasan Province (ISKP). Jaish, the group responsible for the deadly Pulwama suicide bombing which killed forty Indian soldiers and brought the two countries on the verge of a full-fledged war, believes in the fundamentalist Deobandi Islam, to which the Taliban also subscribes. The ties are not just ideological. In a raid on a Taliban training camp in Nangarhar in April 2020, Afghan security forces killed ten Jaish cadres, giving strong proof of cooperation in tactical and operational matters. Taliban fighters may help Jaish in Kashmir in return for Jaish cadres fighting alongside the Taliban in Afghanistan.

After India abrogated Article 370, Pakistan is making serious efforts to ramp up militancy in Kashmir. However, because of the continuous pressure from the Financial Action Task Force, Pakistan intends to maintain plausible deniability, for which the U.S. withdrawal offers a golden opportunity. Islamabad is likely to shift most of the Pakistan-occupied Kashmir-based terror training camps to Taliban-controlled Afghanistan, most likely to emerge as a safe haven for all kinds of jihadist groups. As per credible sources, they have already shifted some camps to Afghanistan. Further, the Indian establishment also fears, and rightly so, that post-U.S. withdrawal, Pakistan is likely to divert many battle-hardened and highly radicalized Taliban fighters to Kashmir. The process has already begun as Pakistan has been reviving Al Badr, a defunct terror group of the 1990s, in Kashmir since 2020. Al Badr has a strong base in the Afghanistan-Pakistan region and reportedly has ties with the Haqqani Network, the sword arm of Taliban. Unlike in the 1990s, today’s Kashmir is highly radicalized on jihadist lines. Kashmir’s radicalized socio-cultural milieu will offer a congenial environment for Afghan jihadis in Kashmir.

Further, in Taliban-led Afghanistan, the strengthening of ISKP and Al Qaeda and its emergence as a regional hub of jihadist groups, is a real possibility. It will present a significant threat to India’s internal security. Contrary to the perception of ISKP being an independent actor, a narrative propagated by Pakistan, its ties with Pakistan-controlled groups like Lashkar-e-Taiba have come to light. ISKP-chief and the mastermind of the Kabul gurudwara attack, Aslam Farooqi, was revealed to be a former Lashkar cadre. A veteran Indian intelligence officer with vast experience in handling Afghanistan and Pakistan informed me in a telephone interview on the condition of anonymity that it is “extremely unlikely” that any terror group can function in South Asia without the blessings of the Pakistani ISI. Al Qaeda’s commander Ayman al-Zawahiri, in 2019, released an audio message expressing his support for the Kashmir jihad. Al Qaeda and ISIS have local affiliates in Kashmir and there is already a history of Indian Muslims from the state of Kerala joining ISKP. Before that, terrorist groups like Indian Mujahidin cultivated robust ties with Al Qaeda in the Indian Subcontinent (AQIS). Further, over the last eight years, Indian Muslims in other Indian states have undergone massive jihadist radicalization and communal polarization, allegedly in reaction to the Modi government’s perceived anti-Islamic policies and loud Hindu-nationalist rhetoric. Hence, there is a strong likelihood of Indian Muslims responding to the jihadist calls of AQIS and ISKP.

With the U.S. withdrawal in place, a new great game involving an array of state actors is unfolding in Afghanistan. India’s archenemy, Pakistan, is likely to emerge as the most powerful player in Afghanistan, as it has been the key patron, benefactor, and master of the Taliban since its formation. Under the ISI’s firm grip, most of the Taliban leadership is based in Quetta. India’s other adversary, China, is also expanding its footprint in Afghanistan for geopolitical and geo-economic ends. Interestingly, China has the advantage of routing its activities through Pakistan, an ally fast turning into a de facto Chinese colony. Recently, a covert Chinese intelligence network in Afghanistan was exposed, although the Afghan government later denied it. China has also firmed up its position in Baluchistan, Sind, and Afghanistan’s northern borders through its China-Pakistan Economic Corridor (CPEC) project, which passes through Pakistani-administered Gilgit-Baltistan, in northern Kashmir, bordering Afghanistan. India’s traditional friend Russia also has a keen focus on developments in Afghanistan as it fears the spread of jihadist elements into the Commonwealth of Independent States (CIS) countries from Afghanistan. However, with India’s ties getting stronger with the United States, Russia is distancing itself from New Delhi and finding new friends in Beijing and Islamabad. The die has been cast, and given China’s aggressive moves, India has no option except to embrace Washington in a full-fledged manner. It will be highly challenging for India to continue its tightrope balancing between the United States and Russia.

Turning to Turkey, Recep Tayyip Erdogan’s caliphate ambitions have already led him to focus on wooing South Asian Muslims, resulting in massive outreach efforts to expand Turkish influence. Turkey enjoys robust ties with Pakistan, and its recent overtures in the Afghan peace process leave little doubt about its future geopolitical ambitions in Afghanistan. Turkey’s Maarif Foundation has already made inroads in Afghanistan, disseminating a highly Islamist curriculum to its schools. Turkey’s presence in Afghanistan, either directly or through its ally, is a potent national security threat for India. Turkey has been engaging in vast religious radicalization in India, cultivating deep links with India’s Islamist groups like Popular Front of India (PFI) and Jamaat-i-Islami, a Kashmiri jihadist group. Reportedly, Erdogan’s private army SADAT deployed jihadist mercenaries in Syria and Libya, is also training Kashmir-centric terrorist groups. With SADAT firmly based in Afghanistan and training cadres of Lashkar-e-Taiba, Hizbul Mujahideen, and Jaish-e-Mohammed, India’s tensions in Kashmir are likely to aggravate.

Further, the prevailing alienation and resentment in Kashmir, after the abrogation of Article 370 and a year-and-half-long security and communication lockdown, will ensure a warm local response, making things smoother and easier for Turkish and Pakistani sabotage activities. Also, Turkey is likely to help Pakistan with its advanced drones, likely to be used in infiltrating terrorists and dropping weapons and cash in India’s territory. Over the last three years, Pakistan has majorly switched to using drones for dropping weapons on account of the tightening security vigils on the Line of Control.

Iran, much less discussed but a highly influential player in Afghanistan, with its tactical and financial support to Taliban and proxy Shia militias, can be categorized as another Indian opponent, despite its cultural and historical ties with India. Since the early 1990s, Tehran had hidden sympathies for Kashmir’s separatists; however, it kept fooling New Delhi by maintaining strategic ambiguity out of economic and geopolitical compulsions. However, India’s strengthening ties with Saudi Arabia, Israel, and the United States, have relieved Iran of those compulsions. In Kashmir, Iran has engaged in massive radicalization over the last few years, turning the traditionally loyal 15 percent Shia minority anti-India. Iran criticized India’s Kashmir move and was harsh on the Modi government, accusing it of pursuing anti-minority policies, following the state action to curb communal violence engineered by the Islamist group Popular Front of India. Moreover, Tehran warmly embraced China, India’s prime adversary, as a strategic and economic partner, having signed a $400 billion deal with China.