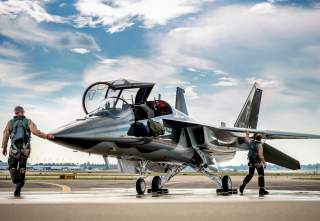 As we have already reported Boeing was selected to build the USAF’s next training jet, the service said on Sep. 27, 2018.

Actually the U.S. Air Force (USAF) has selected Boeing over the KAI-Lockheed Martin consortium for its T-X trainer program, since the former submitted the lowest price — US$9.2 billion.

KAI didn’t provide its own bidding price for its T-50 supersonic jet. However the company’s share lost 29.8 percent after the winner of the contract was announced.

Nevertheless KAI said it will continue to make efforts to export the T-50, which is available both as a training and light attack airplane, in emerging markets like Latin America, Southeast Asia and Africa.

As we have already reported Boeing was selected to build the USAF’s next training jet, the service said on Sep. 27, 2018.

Boeing teamed up with Sweden’s Saab to develop a new plane for the competition, beating out Lockheed Martin, which was offering a modified version of its T-50 training jet developed jointly with KAI, and Leonardo, which offered the T-100, a modified version of the Italian aerospace company’s M346.

The service wants to replace its aging fleet of T-38 planes, which are nearly 50 years old.

The USAF plans to purchase 351 of the jets. The Air Force expects the program to reach full operation in 2034.