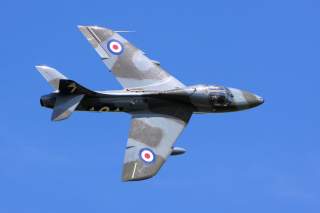 Three miles to go. We enter a shallow dive, aimed to bring us about one hundred feet above the ground at the airfield boundary.

The Black Arrows, one of the predecessor Royal Air Force Aerobatic Team, the Red Arrows, were an aerobatic demonstration team formed in 1956 by Squadron Leader Roger L.Topp, then Commanding Officer 111 Squadron (“Treble-One”).

One of the many memorable feats accomplished by the Black Arrows was the execution of a World record loop 22 Hawker Hunter formation in 1958 at the Society of British Aircraft Constructors’ show at Farnborough. This was a world record for the greatest number of aircraft looped in formation, and remains unbroken to this day.

The following, excellent narrative, titled Going for a Loop and written by the leader Roger Topp, appears on CXI (F) Sqn Association Website.

“A few minutes ago we took off from Odiham in Hampshire, formed our glossy-black Hunter fighters into a tight arrowhead formation and headed for Farnborough.

Weeks of training in the relative obscurity of the Suffolk skies had prepared us for this occasion. Today is the start of the Farnborough Air Display, a world class air show, a big event. Our formation is big too for we about to demonstrate something audaciously new in the realms of fighter aerobatics; a loop by a formation of no less than twenty-two aircraft.

Rapidly we approach Farnborough which lies dead a head at four miles. Against the background of red-brick houses forming the small township, the airfield stands out clearly and we can see the many brightly polished parked, the blue and white striped awnings of the numerous marquees and the dark mass of the crowd.

Three miles to go. We enter a shallow dive, aimed to bring us about one hundred feet above the ground at the airfield boundary. Alter course slightly to adjust for wind and maintain our correct approach path. Gently does it; small movements of the lead aircraft require much greater movements of the extremities of this large formation

Press the radio button and call our man in the tower, the squadron adjutant; soon now he will take over Oliver Stewart’s task of commentator, a concession not easily extracted from this doyen of Farnborough. Our man tells us that John Cunningham, flying the Comet, is completing his display and we shall be clear to commence on time ; and 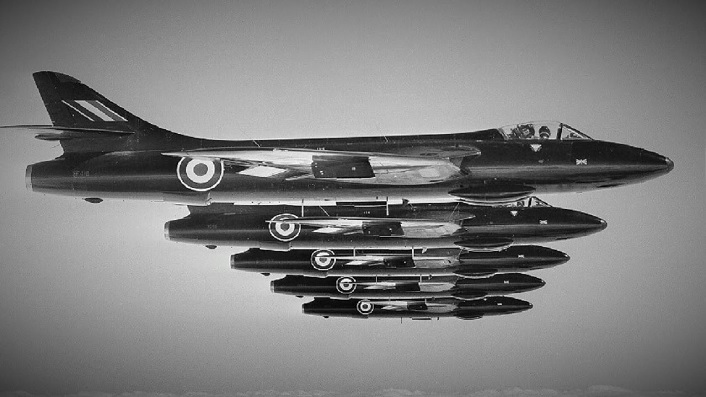 We are on time. To the second.

Down below the compelling voice of Oliver Stewart keeps the attention of the spectators riveted on the Comet on its final approach they have not spotted us yet skimming low over the heather of the Laffans plain even though we are less than a mile away.. Gracefully John Cunningham eases his magnificent aircraft on to the runway. Oliver Stewart reluctantly relinquishes the microphone to our commentator who invites everyone to look now to their left where they will see ….! This is it then. We are on stage. For the next few minutes the skies above Farnborough are ours; we must make good use of this.

We have about one hundred yards to go, we are low. The rear most aircraft are flying beneath the slipstream of those in front is the lowest, some fifty feet above the ground. But the pilot ignores the ground. He, like all the others, fixes his eyes on the aircraft on which he is formatting, concentrating to the exclusion of all else on maintaining his correct position. In every cockpit there is an atmosphere of tense but professional anticipation.

In the lead aircraft I make quick final checks; fuel, enough to complete the display and return to base; airspeed, about 420kts, food; engine power, 7200rpm, enough to give 85% power. Don’t touch the throttle again now; the others will have enough to so without chasing my throttle movements. Down below the airfield boundary flashes by. Now, is the time!

Radio a soft warning of intention to the formating pilots and ease firmly, steadily, back on the control column. As one, twenty-two Hunters rise from among the background of heathered dunes and point skyward.

As we zoom upwards the airspeed falls. Resist the temptation to apply more throttle. We have sufficient speed and inertia to fly over the top of this loop provided we keep the radius correct. Do this by maintaining the right back pressure on the control column. Too much or too little and we shall stall; I dismiss from my mind and disturbing thoughts of what would result from twenty-two aircraft stalling in close formation.

A glance in the mirror confirms that all aircraft are still in perfect formation. So far, so good. All the Hunters are now standing vertically on their tails. For better or worse we are now virtually committed to completing this loop in some fashion or other. From this attitude there is little one can safety do with so many aircraft, other than loop them. It is the point of no return!

Looking forward along the nose of the aircraft all that can be seen is the clear blue of a cloudless sky; the earth’s horizon has disappeared. It is difficult now to keep the path of the loop absolutely perpendicular to the ground, for the limitless sky provides nothing by which direction can be gauged. If the loop is not maintained in the vertical plane then the formation will turn and those aircraft on the inside of the turn must, to stay in position, fly more slowly than those on the outside; perhaps too slowly for comfort. Furthermore, if the loop turns then it’s position relative to the ground moves laterally, and although started in line with the runway will finish well displaced to one side; perhaps over the crowd; a position not renowned for its popularity with the show organisers, let alone the spectators.

But surely, by now we must be nearing the summit. Throw my head well back and look for the horizon. Ah yes! There is I, and level too; we have kept our flight path vertical and all is well.

As we come to the top of the loop, the half-way point, we encounter a further difficulty. An aircraft flying line astern of another must keep below the jet efflux and slipstream of the one ahead. Consequently, the flight path arcs for the aircraft at the rear of the formation are much greater than for those at the front and to maintain station, those at the rear require much more engine power. Unfortunately, at the top of the loop airspeed is low which results in poor thrust response to throttle movements. To keep in formation is difficult; to regain position once it is lost is impossible. 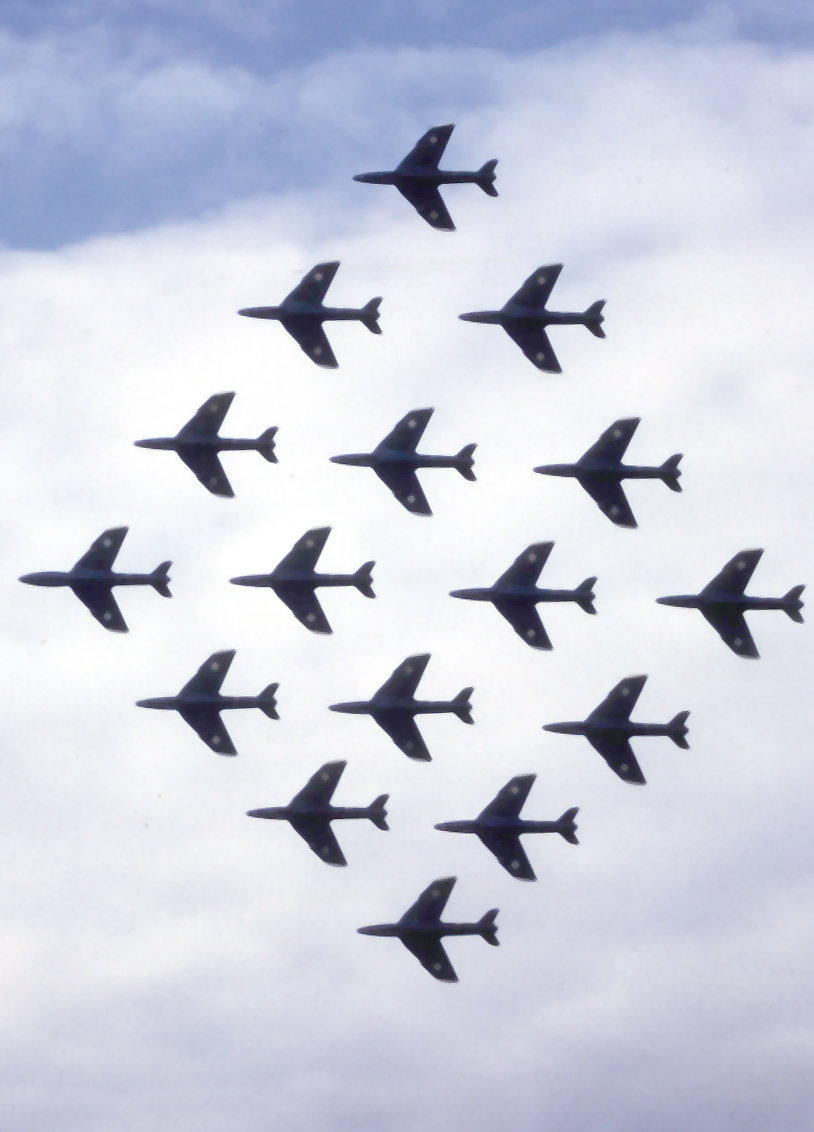 But this is not all, as we reach the summit the aircraft in front begin to descend, the speed ceases to fall and we accelerate quite rapidly. This is only true however, for the leading aircraft because those behind have yet to reach the top so they are still decelerating. This result is a tendency for the spacing between aircraft to increase and the shape of the formation to be spoiled. We must prevent this happening.

In effect those of us in front must wait for those following to reach the top of the ‘hill’; but if we in front reduce engine power we do not achieve the desired result because the effects of gravity on our acceleration more than compensate for the reduction in thrust. Moreover, the use of air breaks would cause too much air turbulence for precision flying. Fortunately there is another method. We in front delay our downward plunge be holding our aircraft, inverted, nearly level with the horizon by relaxing the back pressure on the control column.

Glance again in the mirror. It reveals an impressive sight. As each aircraft in turn tops the ‘hill’ the sky appears to fill with Hunters each poised, floating, inverted, on the horizon. There is a capriciousness in their attitude. As though they themselves anticipate the exhilarating dive to come as much as the pilots.

Very well then. Here we go. Ease back again on the control column and we swoop rapidly downwards, diving for the runway beneath. The speed builds up giving a renewed crispness to the feel of the controls. If anything the formation packs closer together than before. Mere feet separate wing-tip from wing-tip. The airfield grows rapidly larger as we hurtle downwards and as the runway becomes near life-size, our impressive formation ceases its downward plunge and sweeps above the airfield no more than a few feet above the ground.

One can sense the lightness of spirit and the pride in every cockpit. Perhaps the loop was not immaculate but we know that it was pretty good. One day perhaps another Squadron might perform a loop with twenty-two fighter aircraft in close formation and close to the ground and in public but, – – well, we were the first!!