How Can the U.S. Military Defend Itself Against Drones and Cruise Missiles? 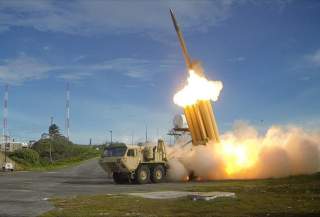 If you take a step back, the strikes themselves were masterful in their signaling despite their opacity. From where did the attacks originate? That's unclear. Who is responsible for the attacks? That too is unclear. Houthi rebels from Yemen claimed responsibility, but such an attack is well beyond their capabilities. It is all but certain that their patron and regional destabilizer in Tehran is behind the strike, escalating the long simmering, but largely covert, conflict with Riyadh fought with proxies.

Of course, the Iranians denied any involvement, but Tehran must be patting themselves on the back at finding vulnerabilities in the armor of the Saudi air defense network. The Russians, for their part, are clearly happy with the strike.

For Moscow, it’s a new sales opportunity. Since the strike, Russia’s been not-so-quiet proffering of their S-400 as a cheaper, better (according to Moscow) solution for governments in the market for air-defense. Clearly, in their words, the American system failed. And, boy, do they have a deal for you!

This ignores the fact the U.S.-made air defense gear was never designed to shoot down the kinds of weapons that hit the Saudi targets. Neither the Patriot missile system nor the S-400 system is designed for these types of threats—combined drone and cruise missile strikes. These weapons are low flying, often slow platforms, launched from unexpected directions. The air defense systems that are in place today are designed for large high-flying aircraft or theatre ballistic missiles. The Terminal High Altitude Air Defense (THAAD) system, another missile defense platform, while impressive, is equally ill-designed to counter these capabilities.

This is to say nothing of the fact that the Saudi crews may have been ill-prepared in any case; you can buy the best kit in the world, but if you don’t train on it and don’t have it pointed in the right direction, it is next to useless.

We need to change our mindset and look to counter these emerging and complex threats. It was only a matter of time before a complex drone and cruise missile strike took place. To date, the strikes that have taken place were fairly small in number and complexity. Look at what ISIS fielded in Syria, the Houthis in Yemen, and the attempted assassination of Venezuelan President Nicolas Maduro.

We need greater investment and research and development in counter-drone capabilities and anti-cruise missile systems. We need to field test new systems more rapidly and not let perfect be the enemy of good. We also need to call out the Russians when they make spurious claims. Buying the S-400 and sending money to Moscow (meaning Putin) isn't going to make you or your facilities any safer. It's the air defense equivalent of a protection racket—you can almost hear Putin say, "that's a real nice oil facility, it'd be a shame if something happened to it… The police can't protect you, but I have a system that can…"

There is no magic bullet or perfect air defense system. There just isn’t. But you can certainly be better prepared for and adapt to the new and emerging threats from drones and cruise missiles. If, however, you keep doing the same thing over and over again, those drones are just going to buzz circles around you, and we can’t afford that at all.

Mike Rogers is a former Republican member of Congress from Michigan and previously served as the Chairman of the House Permanent Select Committee on Intelligence. He is the David M. Abshire Chair at the Center for the Study of the Presidency and Congress (CSPC).