How China Plans To Become an Aircraft Superpower 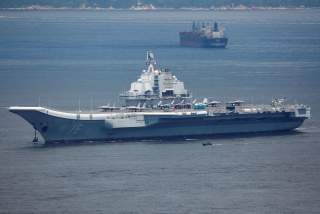 Over the past twenty-five years, the People’s Liberation Army has undergone one of the most startling modernizations—and in many cases expansions—of any peacetime armed forces in recent history. The swiftly growing Chinese economy allowed Beijing to fund defense budget increases that regularly grew by double digits, allowing the PLA to shift from a manpower-intensive army to one that emphasizes technology, power projection, and most crucially, information.

Unlike the U.S. Navy, which concentrates naval aviation in patrol squadrons and ship-based aircraft, the PLAN has significant numbers of land-based fighters, bombers tankers, and other aircraft. PLAN naval aviation historically took a back seat to the mainstream People’s Liberation Army Air Force, a position that changed as China’s security goals changed. While PLAN naval aviation was originally meant for patrolling the country’s coastlines and attacking possible invasion fleets, as China began looking outward so did the PLAN.

By the early 2000s, the naval air arm evolved into a force that could project power a short distance outside of China’s borders, and as that distance grew China gradually aircraft carriers became more of an imperative. Today the land-based PLAN air arm is capable of supporting carriers out to the so-called First Island Chain—from the Kamchatka Peninsula to Japan, and then on down through the Ryukyu islands, Taiwan, and Malaysia. Rupprecht describes the special mission aircraft, including PLAN aerial refueling tankers, that work with and augment China’s carrier air wings near the mainland--operations which, unlike the United States, are a distinct possibility.

In addition to the PLAN, Chinese Naval Aviation covers other naval air forces, including the PLA Marine Corps, China Coast Guard, and China Marine Surveillance. The latter two are particularly important within the context of the various territorial disputes Beijing finds itself locked in. Chinese paramilitary naval forces are an increasingly important tool for China to assert territorial claims, particularly in the East and South China Seas, as an alternative to overt military force.

The PLAN’s naval expansion has created the first “new” naval aviation force in decades, and it is fascinating to watch China navigate this risky—but altogether necessary for an aspiring superpower—field of military operations. Chinese Naval Aviation is a highly useful reference for tracking these historic developments.