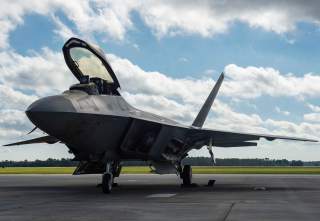 Russia and China will likely use their cyber-warfare and cyber-espionage capabilities to challenge the United States into the foreseeable future.

Both nations possess highly capable forces that can steal information or attack American infrastructure. Indeed, in some cases, highly classified data on some of the United States’ most advanced military hardware—including the Lockheed Martin F-22 Raptor, F-35 Joint Strike Fighters and Bell-Boeing V-22 Osprey—is in now in the hands of foreign adversaries as result of cyber-espionage.

“Cyber threats are already challenging public trust and confidence in global institutions, governance, and norms, while imposing costs on the U.S. and global economies,” reads congressional testimony from Daniel Coats, director of National Intelligence on May 11. “Cyber threats also pose an increasing risk to public health, safety, and prosperity as cyber technologies are integrated with critical infrastructure in key sectors.”

Russia remains the most capable adversary in cyber-space. “Moscow has a highly advanced offensive cyber program, and in recent years, the Kremlin has assumed a more aggressive cyber posture,” Coats stated. “This aggressiveness was evident in Russia’s efforts to influence the 2016 U.S. election, and we assess that only Russia's senior-most officials could have authorized the 2016 U.S. election-focused data thefts and disclosures, based on the scope and sensitivity of the targets.”

The threat will only continue to grow as the Kremlin expands its capabilities. “We assess that Russian cyber operations will continue to target the United States and its allies to gather intelligence, support Russian decision-making, conduct influence operations to support Russian military and political objectives, and prepare the cyber environment for future contingencies,” Coats stated.

In some ways, the damage is already done. Beijing has gained reams of technical information on advanced U.S. weapons system such as the F-22 and F-35. “Adversaries will continue to use cyber operations to undermine U.S. military and commercial advantage by hacking into U.S. defense industry and commercial enterprises in pursuit of scientific, technical, and business information,” Coats stated. “Examples include theft of data on the F-35 Joint Strike Fighter, the F-22 Raptor fighter jet, and the MV-22 Osprey. In addition, adversaries often target personal accounts of government officials and their private-sector counterparts. This espionage reduces cost and accelerates the development of foreign weapon systems, enables foreign reverse-engineering and countermeasures development, and undermines U.S. military, technological, and commercial advantage.”

The Pentagon is already seeing the consequences of such data theft as China presses on with the development of advanced weapons systems that seem to directly draw on American technology. Examples of advanced Chinese weapons that incorporate American know-how include the Chengdu J-20 and Shenyang J-31 stealth fighters and electromagnetic catapult launch systems—which President Donald Trump recently derided—for Beijing’s next-generation aircraft carriers. Indeed, the problem is only going to get worse over time unless the United States steps-up to counter the threat.

(This first appeared in 2017 and is being republished due to reader interest.)