How China Wants to Become an Amphibious Assault Power 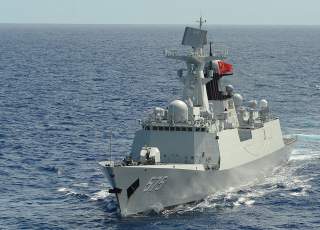 Aside from some niche capabilities, China's development of military sealift capacity broadly breaks down into three main components.

In a defense white paper released July 24, China did not rule out the use of force against Taiwanese "separatists," making the state of its amphibious assault capabilities — which it would rely on in any effort to forcibly reunify the island with the mainland — once again of wide interest. In the past few months, numerous images have surfaced showcasing significant progress in the construction of China's first landing helicopter dock vessel, the Type 075, the first of which is expected to be launched later this year. This is just the latest development in the continued upgrade of China's amphibious capabilities, though China has by no means conquered all of the issues that would limit its ability to carry out a successful amphibious invasion.

Amphibious capability, or the ability to project ground and air power across the sea to another shore, is a vital component of the Chinese military's mission. The capability has attained new prominence in China's strategic planning as its global interests grow — interests it increasingly seeks to protect. The ability to quickly land reinforcements, perhaps in pursuit of seizing islands it claims, is key to China's South China Sea strategy, where it must compete with multiple other territorial claimants. Even more important to Beijing, a well-developed amphibious capability is vital to one of China's most cherished political and military goals, the incorporation of Taiwan under mainland control.

Aside from some niche capabilities, China's development of military sealift capacity broadly breaks down into three main components.

The first is China's large fleet of about 60 large landing ships, mainly the various Type 072 variants, designed to carry troops, cargo and vehicles like tanks and offload them directly onto a beach via bow doors and ramps. These are complemented by nearly 100 army-controlled landing craft. While these landing ships and landing craft would be the workhorses of any large-scale amphibious landing, their need to move directly up onto a beach makes them vulnerable to shore defenses.

The second component is China's fleet of Type 071 amphibious transport docks, which until now were the most capable amphibious vessels in Chinese military service. China has completed eight of these large ships, which are designed to offload troops and vehicles primarily through a floodable well deck from which amphibious vehicles and hovercraft can be disgorged. Not having to land on a beach gives the Type 071 more survivability and flexibility than conventional landing ships.

Finally, the third component is the Type 075, three of which may be under construction at China's Hudong-Zhonghua Shipyard. A large amphibious vessel, the Type 075's primary distinction from the Type 071 is its greater focus on helicopter operations, which is partly made possible by reducing the size of its well deck in exchange for a larger helicopter hangar and aviation facilities. When the Type 075 enters service with the People's Liberation Army Navy, the Chinese will have all the core elements necessary for a truly rounded amphibious warfare capability with which to project marines and ground troops to disputed shores.

For all its progress in developing amphibious capabilities, the Chinese program still has numerous weaknesses. One of these is a clear shortage of helicopters to equip the large number of big-deck amphibious ships coming into service. Up to now, the Chinese could largely meet their helicopter requirements even with the rapid buildup of Type 071 ships given that the Type 071s can carry just four helicopters. Its demand for rotary-wing aviation assets, however, is set to soar given that each Type 075 ship being built would normally have an aviation wing of about 30 helicopters.

Fully equipping the whole Chinese amphibious fleet would require the production of hundreds of new helicopters over the next several years. While it could produce enough for the fleet, competing demands for helicopters from rest of its naval forces and the other branches of its armed forces, including many army units that have older helicopter variants in need of replacement, will strain its capabilities. New multipurpose helicopters such as the Harbin Z-20 that would suit all China's military branches are coming into service, but they are unlikely to be produced in sufficient numbers in the short term to fully meet the Chinese military's requirements. China's growing amphibious fleet will therefore increasingly have to compete with the rest of the Chinese military for rotary-wing assets.

A second issue has to do with the Type 726 LCAC (short for "Landing Craft Air Cushion") that China uses to transfer some of its forces from the Type 071 and Type 075 vessels to the beach during amphibious landings. These hovercraft nominally provide a valuable capability by permitting the Type 071 and Type 075 vessels to launch their embarked forces without coming in too close to the shore, where they would be at added risk from shore-based enemy units. The Type 075 probably can carry two Type 726s, while the Type 071 can carry up to four due to its larger well deck.

But even though there are enough Type 726s to go around, with many of them being rapidly constructed in China's Jiangnan Shipyard near Shanghai, problems with the Type 726 program have emerged. Many seemingly complete Type 726s have long remained idle at Jiangnan Shipyard, while those at sea during training are usually seen carrying only notably light loads. Such details bolster rumors that the Type 726 engines are underpowered and awaiting a fix or a total replacement.

Finally, the significant progress being done to enhance China's amphibious fleet may still not be enough to allow the Chinese to conduct a successful invasion of Taiwan in the short term. The Chinese currently have the amphibious capacity to land about four divisions (about 40,000 troops) against Taiwan in the first wave of a contested landing. The addition of Type 075 vessels to the amphibious fleet will augment this force and add to its flexibility, but probably not enough to ensure success in what would remain a very risky operation for China.

But limitations aside, China's amphibious fleet continues to rapidly evolve and strengthen. In the short term, the entry of Type 075 vessels into the fleet alongside Type 071s will significantly expand China's expeditionary capabilities. In the longer term, as remaining problems are ironed out and the amphibious fleet grows, the Chinese may even develop a credible option for an amphibious landing in a conflict against Taiwan, one of the primary conflict scenarios for which the Chinese military trains.

Amphibious Warfare: The Key to China's Overseas Military Ambitions is republished with the permission of Stratfor Worldview, a geopolitical intelligence and advisory firm.