How China's Airpower Stacks Up Against the United States 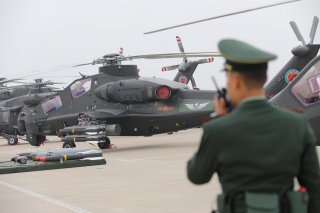 The Department of Defense’s 2021 report on Military and Security Developments Involving the People’s Republic of China was released this week. The report details China’s military capabilities, strategies, and goals. Those goals are being pursued through large-scale military modernization and force expansion, along with scientific and technology initiatives leading to advances in new weapons areas such as hypersonics.

Globalfirepower.com states that the United States now operates more than 10,000 more air platforms than China. The United States operates 13,233 aircraft compared to China’s reported 3,260 total aircraft. However, there are many reasons why the Pentagon is not likely to dismiss the Chinese air threat. China’s growing global footprint in places such as Africa and areas of the Middle East might enable it to position air forces to conduct regional or geographically targeted smaller attacks.

This Chinese basing effort, coupled with the addition of a stealthy carrier-launched jet able to launch from the ocean, might help China compensate for its lack of tankers. The U.S.-China tanker deficit is glaring; China is reported to operate only three tankers compared to a U.S. Air Force tanker fleet of six hundred twenty-five aircraft, according to Globalfirepower.com. This discrepancy could mean that even if China were well-positioned in the Pacific, it may be unable to mount any kind of major cross-continental air campaign without operating a much larger tanker force or expanding its forward basing.

China also suffers from another often overlooked discrepancy when it comes to its helicopter fleet. Globalfirepower.com states that China only operates nine hundred and two helicopters, far less than the 5,400-plus U.S. helicopter fleet. Having fewer helicopters could encumber maritime attack mission options for China in places such as the South China Sea or complicate efforts to reinforce amphibious landings in Taiwan or Japan with troops.

Having so few helicopters would also challenge China’s ground forces should the country need to defend itself from an invasion. While it is difficult to imagine any attacking country trying to fight a land war in mainland China, China’s helicopter deficit might make it difficult for the People’s Liberation Army to deliver infantry from the air in uneven terrain or plateau areas, conduct MEDEVAC missions, or provide close air support.

Despite this, China has the production infrastructure and willpower to propel a large-scale People’s Liberation Army Air Force expansion. An ability to quickly mass-produce new fifth-generation aircraft and helicopters appears possible for China as it pursues its strategic objectives. China’s ambitions in this regard, according to the Pentagon report, are extremely significant as the country is pushing to achieve “the great rejuvenation of the Chinese nation” by 2049, if not sooner.