How China's Military Is Becoming Stronger 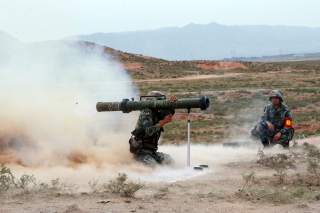 The PRC claims that its policy for national defense is inherently defensive. However, the scope and scale of what the PLA may be called upon to defend is expanding, motivated by the “fundamental goal” of “resolutely safeguarding China’s “sovereignty, security, and development interests.” This phrasing has replaced, and is tantamount to, earlier assertions of China’s “core interests” (核心利益, hexin liyi). There have been changes and a degree of consistency in the framing of these interests over time. [2] However, the characterization of the tasks of the Chinese military and objectives of Chinese defense policy have evolved slightly between the 2015 and 2019 NDWPs. [3] In particular, the PRC’s commitment to safeguarding “national sovereignty, unity, territorial integrity and security” is expanding.

“China’s National Defense in the New Era” declares, “The South China Sea islands and Diaoyu Islands are inalienable parts of the Chinese territory.” Although the militarization of islands in the South China Sea has provoked serious concerns in the region, the PRC’s apparent confidence in its approach appears to have only increased. In 2015, “China’s Military Strategy” had highlighted the importance of “safeguard[ing] maritime rights,” calling for the PLA to “strike a balance between rights protection and stability maintenance.” By contrast, this 2019 NDWP lacks that emphasis on stability, and instead provides a direct defense of PRC actions: “China exercises its national sovereignty to build infrastructure and deploy necessary defensive capabilities on the islands and reefs in the South China Sea, and to conduct patrols in the waters of Diaoyu Islands in the East China Sea.” The justification of such measures as defensive reflects the flexible concept of defense that animates China’s strategy of active defense, which involves an offensive approach at the operational level.

China’s national interests are continuing to expand into new domains and territories. The concern with threats and security interests in new domains, such as space and cyberspace, has been a consistent feature across the 2011, 2013, 2015, and now 2019 NDWPs. However, this latest document is more explicit in describing these as interests to be secured in China’s national defense, including not only outer space and cyberspace, but also the “electromagnetic space.” The PRC intends not only to improve its situational awareness in space but also to “enhance the capacity to safely enter, exit and openly use outer space.” The PRC’s future “use” (利用, liyong) of outer space could involve not only leveraging this domain for military purposes but also pursuing the exploitation of resources. At the same time, China’s attention to cyber security remains consistent with the concentration on cyber sovereignty, which requires reinforcing “national cyber border defense.” The emphasis on the electromagnetic space again highlights the spectrum as another domain for PRC interests.

China has continued to concentrate on safeguarding its “overseas interests,” which are expanding worldwide. This imperative has been relatively consistent across the past couple of NDWPs, but the language in this document indicates its heightened importance. In particular, China’s armed forces intend to “address deficiencies in overseas operations and support,” including “build[ing] far seas forces” and “develop[ing] overseas logistical facilities,” such as the base in Djibouti and a potential base in Cambodia, which may be the first such bases of a number to come (China Brief, March 22). Inherently, China’s national defense requires supporting “the sustainable development of the country.” At a time when growth is slowing and depending ever more directly upon access to markets and resources worldwide, China’s future growth is directly linked to this global outlook. This concern justifies the call for the PLA to contribute to “global security goods,” which may see continued internationalization of China’s military power in ways that could start to challenge the United States.

“China’s National Defense in the New Era” reflects the PRC response to the 2018 U.S. National Defense Strategy, which centered on sharpening the U.S. military’s competitive advantage. [4]American initiatives have evidently provoked a powerful response in the PLA, spurring on Chinese defense innovation (China Brief, October 4, 2016). As a result, the PLA has been greatly concerned with the risks of “technology surprise attacks” (技术突袭, jishu tuji), wary of a “growing technological generation gap” that could emerge as a result of this competition. By its own assessment, the PLA “still lags far behind the world’s leading militaries,” and a failure to adapt could place the PLA in a position of dangerous disadvantage.  This unfavorable situation necessitates innovation as a military, and indeed strategic, imperative.

The PLA is confronting the challenge and opportunity of the “Revolution in Military Affairs (RMA, 军事革命, junshi geming) believed to be currently underway. This 2019 NDWP builds upon notable themes from the 2015 edition, which stated that the global RMA was “proceeding to a new stage.” In particular, those trends were assessed to involve the development of weaponry and equipment characterized as “long-range precision, intelligent, stealthy and unmanned.” In the “new era” described in the 2019 edition, China is particularly concerned with advances in cutting-edge technologies with promising applications in the military domain, especially artificial intelligence (AI), quantum information, big data, cloud computing, and the Internet of Things. As a result of these trends, the form (形态, xingtai) of warfare “is accelerating in its evolution towards informatized warfare, and intelligentized (智能化, zhinenghua) warfare is on the horizon.” [5]

The PLA’s recent reforms have introduced unprecedented transformation into a force once considered resistant to change. However, the PLA continues to confront considerable challenges as a result of the disparities that persist even within the force. Chinese military leaders must “promote the integrated development of mechanization and informatization and accelerate the development of military intelligentization.” [6] The PLA today must undertake all three processes simultaneously, which presents distinct difficulties and potential chances to leapfrog in its development. Notably, this innovation is reportedly extending to the development of new military theories that may be formalized eventually into new “doctrine” or operational regulations (作战条令, zuozhan tiaoling) (The Diplomat, June 6, 2017). However, the PLA’s approach to the requisite technical and conceptual challenges is still taking shape.

Today, the PLA is changing its paradigm for military power: the PLA is “striving to transform from a quantity-and-scale model to that of quality and efficiency, as well as from being personnel-intensive to one that is S&T-intensive.” This objective has involved a significant downsizing of personnel, with 300,000 demobilized on the course of these reforms, and increased investment in human capital. At the same time, the PLA’s approach to military research has been restructured: the CMC Steering Commission on Military Scientific Research has been established, and a transformed Academy of Military Science (China Brief, January 18) has been officially designated to lead the military scientific research enterprise. Guided by Lieutenant General Yang Xuejun (杨学军)—the former commandant of the PLA’s National University of Defense Technology, known for his expertise in artificial intelligence and supercomputing—AMS appears to be undertaking rapid recruitment of the talent required to promote defense innovation in emerging technologies. The “new” AMS is also leading a new initiative to facilitate the integration of theory and technology (理技融合, liji ronghe), which could enable the innovative thinking required to realize the potential of emerging capabilities (Xinhua, February 14).

The PLA is also improving and modernizing its system for weaponry and equipment. The PLA, once described as the world’s largest military museum, is phasing out older equipment while working towards introducing a new “system of systems” (体系, tixi) composed of high-tech weapons, such as Type 15 tanks, type 052D destroyers, J-20 fighters, and DF-26 intermediate and long-range ballistic missiles. The PLA’s next-generation capabilities could prove to be more sophisticated, from higher levels of autonomy to hypersonics and a range of “new concept” systemss, such as directed energy weapons. Whereas prior armaments development had been characterized by a lack of jointness, current initiatives mentioned in the 2019 NDWP are intended to improve capabilities by “coordinating the efforts of all services and arms,” while “promoting the balanced development of main battle equipment, information systems, and support equipment” in order to increase “standardization, serial development and interoperability.”

The PLA’s apparent enthusiasm for technology and innovation can appear incongruous when juxtaposed against a concurrent attachment to tradition. For instance, Mao Zedong’s concept of “people’s warfare” (人民战争, renmin zhanzheng) was described in “China’s Military Strategy” as a “magic weapon” (法宝, fabao) for the PLA. Even as China’s national defense enters this “new era,” the espoused dedication to “give full play to the overall power of the people’s war[fare]” is again reiterated with calls for “innovating in its strategies, tactics and measures.” This is not merely rhetorical, but rather reflects a core concept: “China’s national defense is the responsibility of all Chinese people,” as the 2019 NDWP declares. This approach may appear to be anachronistic in an age of informatized warfare, yet arguably possesses enduring relevance, from cyber defense to a whole-of-nation approach to national defense mobilization. [7] The juxtaposition of low-tech concepts and options with high-tech ambitions can be strikingly incongruous. For example, the much-derided discussion of the PLA’s reintroduction of bugles in the 2019 NDWP can also be characterized as a measure with practical relevance, including to resolving the challenges of command and communications in a highly denied environment (China Military Online, September 12, 2018). China’s armed forces continue to attempt to reconcile such apparent contradictions.