How Churches Become Makeshift Hospitals During Times of Crises 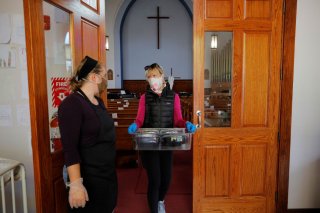 Churches are looking to open up their doors to groups beyond their usual congregants during the coronavirus crisis: doctors, nurses and patients.

The Cathedral of St. John the Divine, the seat of the Episcopal diocese of New York, and one of the largest churches in the world, started a process of converting its premises into an emergency field hospital, earlier this April. The plans were later shelved in response to shifting needs and amid reported concerns over the involvement of a group criticized as anti-LGBT, but not before tents had been set up for 400 beds inside the cathedral’s vast interior.

Meanwhile, in Homer, a small city in Alaska, a church’s pastor preached from the parking lot during a drive-in Easter service, while the interior of the church was being used as an alternate hospital site to manage the overflow of COVID-19 patients.

The last time churches in the U.S. were turned into temporary hospitals was during the Spanish flu epidemic of 1918. But there is a much longer history of churches serving as hospitals, particularly during times of crisis such as war or plague.

The origins of hospitals

The first Christian hospitals, or “xenodocheia,” a Greek word denoting “houses for strangers,” cared for pilgrims, the poor and those with infirmities. Bishops founded these hospitals during the fourth and fifth centuries, particularly in the Byzantine Empire. During the early ninth century, Holy Roman Emperor Charlemagne, ordered that every cathedral have an attached hospital, underscoring the bishop’s central role as protector and healer of his flock.

Monasteries were also key providers of medical care during this period. The influential Rule of St. Benedict, written in the fifth century to provide directives for the daily communal living of monks, affirmed the Christian duty to care for the sick as if they were Christ.

Throughout the Middle Ages, infirmaries were spaces run by monasteries for the healing and convalescence of those who were ill. Monastic infirmaries not only treated monks, but also sick guests coming from outside a monastery’s walls. Monasteries were also centers of medical learning.

A recent archaeological excavation of the monastery of Thornton, located in Lincolnshire, England, found that a hospital inside the monastery was caring for dozens of men, women and children afflicted with plague during the 14th-century Black Death. When they died within a short time span, they were placed in a mass burial outside the monastery due to the lack of time for individual burials, a prospect that was recently raised in New York City.

Likewise, convents were frequently built next to hospitals, or were even turned into hospitals, so that nuns could care for the sick. For certain medieval religious women, palliative caregiving was a key feature of their spiritual identities.

Many of the saints canonized by the Church during the late Middle Ages were lay women and men who had provided assistance for those stricken with plague, leprosy and other infirmities.

From A.D. 1050 to A.D. 1300, thousands of new hospitals were built across Europe, catering for those afflicted with leprosy, poverty and other illnesses.

As I show in my new book, the emergence of this “hospital movement” was part of a broader charitable revolution that saw the creation of new institutions to care for medieval Europe’s sick, poor and vulnerable.

Founded in the 11th century to care for wounded pilgrims in Jerusalem, the Order of St. John, or Knights Hospitaller, quickly became militarized during the Crusades, regularly engaging in military combat. However, the order continued to maintain its large hospital in Jerusalem, and during the 12th and 13th centuries, it also set up a large network of hospitals both in the eastern Mediterranean and across Europe.

Architecturally and in design, many medieval hospitals looked like churches, and some can still be seen in places like Tonnerre, France, and Norwich,, England. The central ward of these hospitals resembled a nave, or the central, rectangular part of a church.

There was often a chapel at the east end of the central ward where patients were housed, thereby making it possible for the sick to participate in the Mass from their beds.

In late medieval and early modern Europe, plague hospitals were frequently staffed by physicians, priests, members of religious orders, and lay religious women and men. Like the workers on the front lines of treating COVID-19 today, these premodern health care workers faced great dangers. Priests working in plague hospitals used a special tool to administer the Eucharist so as not to get infected by patients. The priests heard confessions from a distance, enforced quarantines and created an area outside plague hospitals for disinfecting household goods and slaughtering household pets that belonged to plague victims.

Although the image of the interior of the Cathedral of St. John the Divine being set up as a hospital ward for treating COVID-19 may be jarring to some, it harks back to the many centuries when religious spaces were regularly used not only for prayer, preaching and religious ritual, but for caring for the sick, giving aid to the needy, and burying the dead.