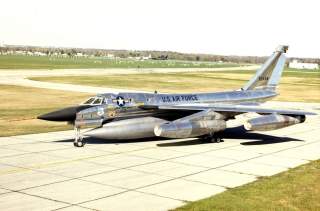 Key point: Supersonic passenger jets are fast, but they make a lot of noise. Also, the B-58 just didn't have enough passenger space to be commercially viable.

In one of the strangest developments of the Cold War, plane-maker Convair proposed to build an airliner version of its Mach 2.0-capable B-58 Hustler.

The Convair B-58 Hustler was the world's first operational supersonic bomber. A four-engine delta-winged aircraft that resembled a jet fighter more than the lumbering B-52s and Tu-95 bombers of its day, the Mach 2.0-capable Hustler entered service in 1960. Its initial mission was to penetrate Soviet airspace to make high-altitude nuclear attacks, until the threat of Soviet anti-aircraft missiles forced it to switch to low-altitude strike.

Even 55 years later, the B-58 still has that "wow" appeal. It had remarkable features for its time, one of which was replacing the traditional bomb bay with a detachable pod that that carried the nuclear bombs and extra fuel. With standard ejection seats replaced by an escape capsule that completely encased the crew in a protective cocoon, the Hustler sounded like something out of "The Jetsons".

With the world's aviation powers eagerly pursuing the dream of supersonic commercial travel in the 1960s, perhaps it wasn't surprising that in 1960, Convair proposed a B-58 supersonic transport. It wouldn't be the first time bombers and airliners traded places. Nazi Germany's Focke-Wulf 200, which began life as an airliner in 1937, was converted by the Luftwaffe into a maritime patrol bomber. It went on to terrorize Allied merchant ships for the first half of World War II. The famous Avro Lancaster bomber went from raining bombs on Berlin in 1944, to raining food in the 1948 Berlin Airlift as the Lancastrian passenger aircraft.

The B-58 SST (Supersonic Transport) would have resembled the bomber version. But it would have had a longer fuselage that seated 52 passengers, according to aviation historian Scott Lowther, who has written a monograph on the B-58 SST. The aircraft would cruise at Mach 2.4 at a range of 2525 nautical miles.

But Convair wasn't sure how the flying public would react to supersonic flight. So it suggested flying test subjects in a "people pod" that would replace the bomb/fuel pod on the Air Force B-58. "Five seats would be installed within it. This pod would have the same external contour as the existing pod, but would be fitted out with a pressurized volume, door, windows and air conditioning system," Lowther writes.

The first phase of the project actually went ahead; 1,200 supersonic flights were flown with B-58s, F-104s, F-101s and F-106s over Oklahoma City to determine how people on the ground would react to sonic booms. "While it was found that most people tolerated the booms quite well, about 3 percent of the population disliked them enough to file official complaints," says Lowther. "This turned out to be sufficient to massively damage political support for the SST program, and in no small part contributed to the death of the American SST program."

Lowther notes that the B-58 was not considered the optimum design for a supersonic transport, but it was considered "the most realistic design that could see flight soon." Yet it never did see flight, while the B-58 bomber itself only had a 10-year career. The Air Force only built 116, and retired them in 1970 in favor of the big, slow B-52.

As a bomber, the Hustler was expensive, suffered from limited range less than half that of a B-52, and had a reputation for needing a lot of maintenance. As an airliner, a 52-passenger load would have been unimpressive. Unfortunately for aspiring bomber-airliners, the trinity of range, maintenance costs and passenger capacity are the holy grail of commercial air travel. Add in the sonic booms, and it seems that like the Concorde, it likely would have been a prestigious but ultimately unprofitable air transport.

Still, a supersonic trip in a B-58 airliner would have been a heck of a ride.

Michael Peck is a contributing writer at Foreign Policy and a writer forWar is Boring. Follow him on Twitter:@Mipeck1. This first appeared in 2015.