How the Coronavirus Is Crippling U.S. National Security Efforts in the Arctic 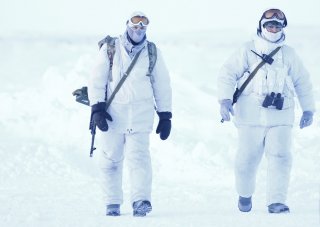 The pandemic that knows no borders has managed to impact one of the farthest corners of the globe: the Arctic Circle. With declining oil prices, inadequate healthcare systems, and sparsely populated communities in remote locations, the population of the Arctic remains particularly vulnerable to societal and economic implications of this disease. Moreover, scientific and climate expeditions, military operations, and prospects for international cooperation in the region have come to a screeching halt as a result of the coronavirus epidemic.

Over the course of the twenty-first century, the previously frozen and seemingly desolate ocean of the Arctic Circle has become a hotbed of geopolitical contention and economic interest. Global warming has accelerated melting polar caps, revealing undiscovered oil and mineral deposits, abundant fisheries, and the prospect of the fastest sea route from Europe to Asia. The United States, Denmark, Finland, Iceland, Sweden, Greenland, Norway, Canada, and Russia all lay claim to the area of exploitable territory off the coast of their respective borders and many outside players in Eurasia, also called “observer states,” have expressed vested interests in the Circle, including China.

International organizations, such as the Arctic Council and United Nations, have managed to foster multilateral cooperation in the region especially in areas of scientific research, though overall, the nationalistic agendas of each state trump priorities of international organizations and the region still doesn't have a forum for security negotiations; the majority of meetings to foster Arctic diplomacy have been put on hold for the time being. This has serious long-term implications in the post-coronavirus world stage as the Arctic Circle has the potential to become the next arena of military confrontation considering the alarming rate at which Russian president Vladimir Putin has built up Russia’s Arctic military capabilities and the Russian flag boldly planted on the seabed of the North Pole “as a bid for control over the entire region.”

The Arctic Circle is warming twice as fast as the rest of the globe, but essential climate research expeditions have been delayed due to growing concerns the virus would spread rapidly aboard expedition ships. German research vessel Polarstern postponed the entire expedition to the Arctic planned for this year after one of its crew members tested positive for the virus in Germany and lack of testing did not justify the risks for embarking on the expedition.

The tourism sector of the Far North has also been severely impacted: Canadian cruise ship lines, for example, have deferred trips to the Arctic for the remainder of this year, which brings at least two million people per year to Canadian coasts. China is actually a major source of tourism for the Arctic, especially for Norway, which has been particularly hard-hit by travel restrictions since tourism accounts for almost 5 percent of GDP in Northern Norway.

Similarly, Alaska’s oil-dependent economy is suffering from declining oil prices and financial withdrawals. The Union Bank of Switzerland, which has previously invested about $300 million in Arctic oil and gas projects, recently announced they have committed to no longer provide finance for new offshore oil projects in the Arctic on behalf of Alaska. In addition to oil, fisheries and seafood industries in the Arctic have witnessed a significant decrease in demand for exports after the coronavirus began to spread across the globe. Increasing transportation costs and travel restrictions have impeded the ability of these industries to export seafood and other goods to Europe and Asia.

On the military front, Norwegian authorities have canceled Arctic military exercises “Cold Response” scheduled to host fifteen thousand troops from the United States, Norway, and eight other allied countries in fear of a coronavirus outbreak. Arctic NATO-littoral countries and Russia frequently perform military exercises in the Arctic Circle to test new cold-weather capabilities, many of which are scheduled to be postponed.

The multitude of indigenous communities of the Arctic, in places such as northern Alaska and Siberia, lack access to basic health care and the health systems in place are not equipped to deal with an outbreak. The remote locations of these communities mean it would be difficult to send medical supplies and resources. These communities have historically been more vulnerable to epidemics and pandemics: during the Spanish flu in the early 1900s, 85 percent of the population in Brevig, Alaska, died within just five days from the disease. As of March 23, the number of coronavirus cases in the Faroe Islands in the North Atlantic archipelago doubled in one day and there have been reported cases in Alaska and Arkhangelsk, Russia.

Anya Gorodentsev is a program assistant with the Center for the National Interest and recent graduate of the University of Vermont.