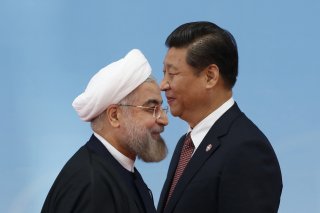 Iran’s President Hassan Rouhani recently warned that coronavirus-related restrictions that were recently loosened on economic grounds might be reimposed if a second wave of the virus erupts across the country. Iranian health officials reported 3,134 new coronavirus infections on June 3, which marks the highest contagion rate since March 30 and brings the total number of cases to 160,696. The Rouhani administration’s impatience with the resumption of domestic economic activity was partly due to the stifling pressure of U.S.-led sanctions coupled with disruptively low oil prices. Fears of economic instability and public unrest as a potential consequence also affected the Islamic Republic’s permissive early response to the outbreak originating from China, with ultimately cataclysmic ramifications.

The fact that Iran is the nation in the Middle East hit earliest and hardest by the coronavirus pandemic is no accident. While most governments ostensibly failed to take the public health threat seriously in the early stages of coronavirus spread beyond China’s borders, Tehran went the extra mile of allowing Mahan Air flights to and from China to operate as usual, even after it belatedly confirmed Iran’s first virus-caused fatalities on February 19. Among other things, the Iranian government’s handling of the virus crisis has demonstrated, more clearly than ever before, its increasingly alarming dependence on China in an era of American “maximum pressure.”

A “Negative” Test of Iran-China Partnership

In fact, it was this heightening dependence that partly inhibited the Iranian leadership from adopting decisive action against Chinese vectors, although Beijing itself alerted the World Health Organization (WHO) to the new disease as early as December 31 and moved, on January 23, to enforce a complete lockdown on tens of millions of inhabitants in the Hubei province, including the city of Wuhan where coronavirus erupted. Mahan Air flights from Tehran to China and vice versa continued until at least February 24.

In a sign of efforts to assuage mounting concerns in Iran over the possible impact of the outbreak on Tehran-Beijing ties, Chinese ambassador Chang Hua posted a tweet in Persian of his meeting with Mahan Air CEO Hamid Arabnejad on February 2, confirming the latter’s expression of willingness to “continue cooperation” with China. Around two months later on April 5, when the coronavirus public health crisis had reached a critical point across Iran, health ministry spokesman Kianush Jahanpur took to Twitter to denounce Beijing for “mixing” science with politics and producing inaccurate information about the nature of the novel coronavirus threat. “It seems China’s statistics were a bitter joke as many in the world thought this was a flu-like disease with a smaller mortality rate,” he said at a news conference on the same day. “All these [measures] were based on reports from China, [but] now it seems China played a bitter joke with the world.”

Chinese ambassador’s public response was unconventional. “The Ministry of Health of China has a press conference every day. I suggest that you read their news carefully in order to draw conclusions,” Chang Hua wrote, indicating the extent of influence Beijing wields in the Iranian corridors of power. Unsurprisingly, the rhetoric evoked memories of “capitulation” to foreign powers among many Iranians—which the Islamic Republic had pledged to end after the 1979 revolution—and provoked an unprecedented public outcry over Beijing’s condescending and “colonialist” treatment of Iran.

Yet, the Iranian foreign ministry’s reaction was one of unmistakable appeasement. In a tweet that was warmly received by the Chinese ambassador, Iran’s foreign ministry spokesman Seyed Abbas Mousavi commended “Chinese bravery, dedication & professionalism” in dealing with the coronavirus pandemic and stressed that Iran “has always been thankful” to China. Significantly, most hardliners and media outlets close to the Islamic Revolutionary Guards Corps (IRGC) took a similar stance, inveighing against the Iranian health ministry for its inappropriate criticism of Beijing. “While China has been the biggest aid-provider for Iran in its fight against the coronavirus and supplied Iran with several strategic products by circumventing sanctions, [Iranian health ministry spokesman] Jahanpur suddenly becomes the spokesman of Trump and Israel,” wrote Hassan Soleimani, Editor-in-Chief of Mashregh News affiliated with the IRGC. Others even went as far as to call for the dismissal of Kianush Jahanpur from the health ministry after his public protestations against Beijing and its handling of the virus crisis.

If anything, the coronavirus controversy revealed the tip of the iceberg of uneven strategic relations between Tehran and Beijing, where the more powerful partner increasingly determines the rules of the game and how the partnership should proceed, often at the expense of the weaker partner’s national security, independence and long-term interests. Mahmoud Sadeghi, a member of parliament and vociferous critic of hardliners, was quick to point out that Tehran’s appeasement of the Chinese government does not correspond with the revolutionary tenet “neither East, nor West, but the Islamic Republic,” and runs roughshod over the “principle of dignity” in Iran’s foreign policy.

Yet, public health is not the only policy area where Iran’s decisions have been affected by its “comprehensive strategic partnership” (CSP) with China. The partnership also accounts for the Supreme Leader Ayatollah Khamenei’s conspicuous silence and inaction on Beijing’s reprehensible treatment of Muslim Uyghurs.

Though not the sole actor within the Muslim world that has turned a blind eye to China’s state-sanctioned atrocities against the Uyghur minority, the silence of the world’s most populous and powerful Shia nation resonates widely. The international press has extensively exposed China’s systematic violations of human rights in the Xinjiang province, which go as far as to set up concentration camps under the label of mass reeducation and deradicalization programs. Recently, Iranian Supreme Leader Ayatollah Ali Khamenei, a loud voice on the fate of Muslims around the world, urged India to stop “the massacre of Muslims” in the subcontinent while he has chosen to condone the Chinese government’s systematic abuse of Uyghur Muslims’ fundamental human rights.

A similar type of expedient silence and inaction have also been partly extended to the Chinese firms’ notorious exploitation of natural resources off the southern shores of Iran in the Persian Gulf and Sea of Oman, through what is commonly known as “bottom trawling.” The industrial method of fishing is widely believed to deplete marine reservoirs in the coastal areas, damage the natural ecosystems where it is practiced, and undermine the local economy that is in important part based on small-scale traditional fishing. The public outcry over the issue gained so much traction that the IRGC was compelled to intervene and limit the operations. “I came to believe that there is a mafia behind bottom trawling [by] Chinese ships,” General Alireza Tangsiri, commander of the IRGC Navy warned in February 2019. “One cannot close their eyes to these realities and we have to stand up firmly against those who seize bread from the table of traditional fishermen.” Echoing similar criticism, Iran’s Minister of Culture Mahmoud Hojjati pointed out in November that Chinese trawlers operating in the southern waters have not secured an official permission from the Iranian government. Yet, it seems the practice still persists.

Another sign of Iran’s secondary position within China’s strategic priorities can be traced back to its pre-JCPOA voting record at the U.N. Security Council. Between 2006 and 2010, China has indeed voted in favor of all six UNSC resolutions addressing Tehran’s nuclear program. Notably, four of them included the imposition of progressively expansive sanctions on Tehran.

China’s voting record at the Security Council could be observed from two different angles. The first is Beijing’s general attempt to be seen as a responsible stakeholder that respects the international consensus generated around important matters of global security. The other is that China tends to prioritize its ties with the United States at the expense of Iran. Given China’s global ascent and the level of interdependence between Beijing and Washington, this is far from surprising. The result is that, despite the pompous claims of unmatched friendship and solidarity, China’s Iran policy has often turned into a dependent variable of its relationship with the United States—a reality that could hardly fulfill Tehran’s expectations.

The establishment of the CSP in 2016 does not seem to have changed that pattern substantially. In the last two years, China has vocally opposed the reintroduction of secondary sanctions against Iran by the Trump administration. However, Beijing’s will to protect its partner from sanctions has remained subject to the evolution of its trade war with the US. For instance, after the U.S. Treasury issued the Executive Order 13902, sanctioning Iran’s construction, mining, manufacturing, and textile sectors, Bank of Kunlun informed its Iranian clients that, from April 9, it would not accept payments related to those industries. As aptly noted, the new U.S. sanctions and the change in Bank of Kunlun’s compliance policies were issued days before President Trump and President Xi signed the Phase One of the trade deal on January 15. It appears that, once again, Beijing has sacrificed its relationship with Tehran in favor of securing bigger interests with Washington.