How Coronavirus Will Change the Way You Vote 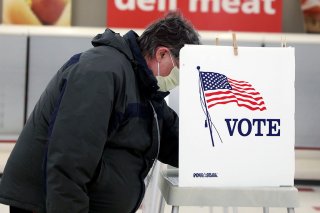 Rock the Vote and other slogans have been staples in past elections. For 2020, it’s about Sanitize the Vote.

The coronavirus pandemic already has affected the 2020 election season, amid speculation that it could have greater impact in the months ahead.

Election officials in most states and localities are partnering with the U.S. Department of Homeland Security, the Centers for Disease Control and Prevention, state public health departments, and other relevant agencies to get out useful information, according to the National Association of Secretaries of State, which represents the nation’s chief election officials.

“Our members are closely monitoring COVID-19 public health alerts, working with their state public health departments, and assessing their state emergency preparedness plans accordingly,” Maria Benson, a spokeswoman for the association, told The Daily Signal. “Each state will administer elections with their voters’ health and safety as the top priority.”

Meanwhile, the Democratic National Committee has called for more mail-in voting for the remaining 21 primary states, while two Democrat senators are proposing legislation to mandate that states expand mail-in voting.

“By November, the pandemic should have peaked,” von Spakovsky, a former member of the Federal Election Commission, told The Daily Signal. “We had three primaries yesterday, and while it was down nominally from 2016, turnout was not super low.”

Here are four ways election officials across the country have responded, and soon may respond, to the coronavirus.

1. Current Laws and Past Precedent

Currently, 12 states have a law specifically authorizing the state’s governor or chief election official to suspend, delay, or postpone an election after the governor declares a state of emergency, according to the National Association of Secretaries of State.

Other states have laws that give state or local election officials limited authority to implement certain measures in emergency situations. This could involve relocation of polling places or special absentee voting procedures, according to the association.

Recent past precedent for dealing with emergencies at election time came when Hurricane Sandy hit more than a dozen East Coast states ahead of the 2012 presidential election.

Ohio was supposed to be among four states holding a presidential primary Tuesday. However, Gov. Mike DeWine, a Republican, postponed the primary to June hours before polls were scheduled to open as new health concerns emerged.

Ohio is one of five states to make changes in scheduled elections.

The vast majority of states, 33, already allow absentee voting without the need to provide a reason.

A total of five states—Colorado, Hawaii, Oregon, Washington, and Utah—hold elections entirely by mail, according to the National Conference of State Legislators. Utah allows local jurisdictions to opt for in-person voting.

“In order to ensure the voices of voters are heard, the DNC is urging the remaining primary states to use a variety of other critical mechanisms that will make voting easier and safer for voters and election officials alike,” Perez said in a formal statement, adding:

Sens. Amy Klobuchar of Minnesota and Ron Wyden of Oregon, both Democrats, proposed legislation to expand early in-person voting and “no excuse” absentee voting by mail to all states.

“Without federal action, vulnerable Americans are going to have to choose between casting a ballot and protecting their health,” Wyden said in a written statement. “Vote-by-mail is a time-tested, reliable way for Americans to exercise their constitutional rights, and the right answer to respond to this crisis.”

State and local officials are encouraging voters to vote absentee and avoid crowds, and are expanding absentee eligibility.

Absentee ballots must be an option, but a federal law that would last beyond the pandemic is a problem, von Spakovsky said.

Absentee ballot fraud, such as requesting ballots and then voting without the consent of the voter, obtaining an absentee ballot from a voter, or forging signatures is the largest category of voter fraud.

“Expanding all-mail voting, as they have in Washington and Oregon, creates one of the easiest ways to steal and alter votes,” von Spakovsky said.

Von Spakovsky referred to a 1998 Florida Department of Law Enforcement report that concluded, “The absentee ballot is the ‘tool of choice’ for those who are engaging in election fraud.”

Even the mail-in option isn’t fully sanitized, and election officials are advising voters to seal absentee ballot envelopes with a wet cloth or a sponge instead of licking the envelope, according to the National Association of Secretaries of State.

“I am not sure we want an election system to rely on the U.S. postal system picking up an envelope that has been licked by one individual [and] touched by the mail carrier who delivers mail to the next house,” Adams told The Daily Signal, referring to possible spread of the coronavirus.

Absentee voting consistently has been the most prone to corruption, said Adams, a former Justice Department lawyer, who noted the 2006 federal case against the Democratic Executive Committee of Noxubee County, Mississippi, which was keeping a political machine in place by manipulating absentee ballots.

After a federal judge ruled that the county had violated the law, the parties entered into a consent decree.

Already, many election officials have distributed hand sanitizer, disposable gloves, and cleaning wipes to polling places, according to the National Association of Secretaries of State.

Elections historically are decentralized, and Adams said this seems to be a case of some liberal lawmakers not wanting a crisis to go to waste.

“It doesn’t take a rocket scientist to devise ways to make in-person voting more hygenic,” Adams said. “A federal power grab is not as effective as disinfectant wipes at a polling place.”

As a contingency, some jurisdictions are recruiting more poll workers to cover any potential shortages due to illness, and are strongly encouraging polling place workers to stay home if they are ill.

Other localities are relocating polling places away from nursing homes, senior living facilities, and other locations where older, high-risk individuals reside.

This article by Fred Lucas first appeared at The Daily Signal on March 18.

Image: Voter Fred Hoffman fills out his ballot during the primary election in Ottawa, Illinois, U.S., March 17, 2020. The polling station was relocated from a nearby nursing home to a former supermarket due to concerns over the outbreak of coronavirus disease (COVID-19). REUTERS/Daniel Acker.