How the Cost of War Impacts American Families 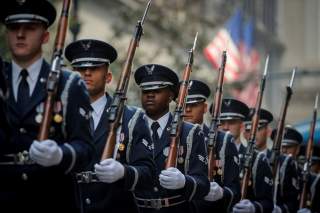 It seemed as if we were always waiting. My mother, sister, and I would wait on crowded piers or on endless acres of tarmac waiting for the assault ships to shift colors or the auxiliary power units on the C-17s to wind down. Off the brow or down the ramp, they would come and the crowd would cheer. Flags would wave. They all looked the same, weary and whip-cord thin, weighted down with monstrous packs and mixed emotions. They were just as frightened as we were.

At home, my mother kept him safe, giving him time to adjust away from the punctuated terror, crushing discomfort, and camaraderie of war. His eyes searched for things that were new or out of place. He would sit on the back deck that overlooked the saltmarsh. His face would crease with worry and anticipation – visibly uncomfortable in the stillness of his alien home. My mother would play Johnny Mathis, his favorite, and he would smile and lean back into the chair.

War has a way of focusing the mind. There are no bills to pay, report cards to worry about, or lawns to mow. There is just the war, a singular consuming imperative, and it takes a long while to adjust to the trivialities of real life. His last homecoming was different than the rest. Of course, this war was different than the ones before. My mother knew this and gave him space. When she thought him ready, she would let us go to him.

I would crawl up, competing for space with my older sister.

“Ah, good thing. This dumb Marine was just about to float away. Thanks for holding me down.”

I grabbed his hand and held it up, splaying his fingers, segregating the nub of his pinky finger from the rest. It was a point of embarrassment to him to receive a medal for so small a thing as a pinky finger, but he more than made up for it with the broken ribs, burst lung, and fractured skull from the overpressure of an IED explosion that accompanied it. His tattooed  dosimeter, a half-inch dot on the underside of his wrist, displayed a cautious yellow.

I ran my hand across the nub of his finger. The scar tissue was oddly smooth. “Gross,” I said. “Did it hurt?”

“You bet it hurt,” he replied.

My sister and I would lean back into his warmth and count the dragonflies. Hundreds of them crossed the evening light, capturing mosquitos on-the-wing over ribbons of silver water. He propped his feet on the railing, offering his toes as resting spots for the dragonflies. When they landed, we called them by name. Banded Demoiselle, Brown Hawker, Ruddy Darter, Four-Spotted Chaser, Globe-Skimmer.

He knew them all.

My older sister joined the Marine Corps against his wishes. He never said what he wanted, but I imagine he desired what every father hopes for his daughter – to marry a man that would love her as he did. Still, he was never so proud of anything as to when he pinned her Naval Aviator wings on her at NAS Whiting Field. In that moment, I wished I was her, a brand new Second Lieutenant on stage with her father, a First Sergeant with a Navy Cross. She took up the family business as if there was no real choice in the matter. Some families just serve.

She flew Ospreys, the ones armed with Hellfires and 20mm guns. While executing a fire support mission, her ship and another had collided, meshing blades and shattering the rotors. Both tiltrotors had gone down in a fifth-generation war that pitted formless brutality against hyper-technology. The investigation was lost to the expediencies of war. Who cares whether it was her or the other that had turned the wrong way. For the dead, there were no more lessons to be learned.

My mother couldn’t accept the flag…couldn’t touch it. The honor guard handed it to my father and he clutched it to his chest in a raptor’s claw, whitening his knuckles, holding so hard that he pierced his palm with a thumbnail and blood ran down his wrist as if he was squeezing it from the national ensign.

I was nineteen when Meghan died. I don’t remember exactly how I felt. It seems so distant and remote. I do remember my parents fighting after Meghan’s funeral. My father’s need for solitude clashed violently with my mother’s need for contact. Ugly silence gave way to pointless accusations.

“She was my daughter,” said my father.

“My daughter too. She was mine. All your damn oohrah.”

He looked to the ground. “No,” his voice cracked

I hugged him, pulling him close. Dangling medals and the gold buttons pressed into my chest. Meghan’s death did to him what no war could. It made him smaller. No grief can compare to a mother who has lost a son to a war, except perhaps, for a father that has lost a daughter.

My mother joined us and we held on to each other, afraid to let go lest we all float away.

Whippoorwills called and fireflies merged with the stars. My father was home. My sister was not. Soon, I would leave.

Days after my sister’s funeral, my father came to me in the early morning. “I have something for you.”

I followed him to the shop behind the house. The shop was his retreat. He made flag display cases and presentation displays to honor careers. He also made wooden boxes, some so small that only a single engagement ring could fit inside, some large enough to be considered furniture. He called all his boxes hope chests and he gave them away to friends and family. I remember one Christmas all of our presents were in boxes he had made. I loved the smell of freshly cut wood and carefully oiled tools.

From the rafters, above lengths of oak and cedar, I pulled down a rolled carpet wrapped in heavy brown paper. I set it on the floor. My father knelt and untied the twine that bound the carpet. He unrolled the carpet across the shop’s wood floor and smoothed out the wrinkles. Morning light caressed the carpet’s silk threads. It was beautiful and I wondered why he kept it wrapped in paper, hidden from everyone.

“In Iran, I bought a carpet,” he said. “We were in a mountain village, far enough away that we could relax our radiological gear. I had tea with the owner. He needed money to escape into Turkey before the wind carried fallout to his village.”  He sank to his knees and bent over, supporting himself with his hands. He placed his face against the carpet and breathed deep. “It smells like Iran.” He swept his hand across the carpet and a shimmering silken wave of light flowed across the threads. “The carpet is done in the tree of life pattern.” he said softly. “Come here.”  He lifted a hand and grabbed my sleeve, pulling me down. “Just watch.”

The carpet was hypnotic in its beauty.

The magnificent tree swayed in a spring-perfumed breeze. Jeweled birds darted amongst the myriad delicate branches, nesting and feeding. Animals crowded the base of the tree. Glorious flowers budded and bloomed. Insect buzz, amphibian croak, and bird song filled the shop. The flowers faded and the tree bore fruit that ripened and fell to the ground. Striped tigers, fierce lions, and immense bears dragged down leaping deer and sprinting antelope. A pair of lovers danced into view. The leaves fell and nourished the soil for the cycle to start over.

“Sometimes, when I dream, I see the burned woman,” said my father. “She has no hair. She turns her head back and forth to see because her eyes are flash-blinded from the detonations. She carries something that looks like a burned doll. She asks for help and I do so. I shoot her. But there are more like her, and we can’t help everyone. There aren’t enough bullets. We don’t have enough bullets to help everyone.”

I leaned forward and studied the carpet, trying to see what my father saw.

“That leaf is wrong. All of the leaves have five points except that one.”  I pointed at a leaf on lower branch. “It has four, someone made a mistake.”