How Could America Build the Conditions for a Transition in Venezuela? 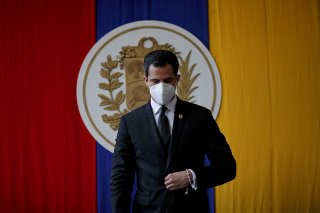 There have been reports stating that the Biden administration is willing to negotiate with the Venezuelan regime of Nicolas Maduro; a negotiation that would consist of dropping the American sanctions in exchange for free and fair presidential elections in Venezuela. If these reports are true, then the Venezuelan crisis will not be resolved anytime soon, as no sanctioned and unpopular regime would ever take that deal, but just use it to gain time and legitimacy.

President Joe Biden and his advisors ought not to be thinking about negotiations. Instead, they should be thinking about building a framework of incentives designed to nudge a political transition. To do this, the new administration has to identify and address the interests and weaknesses of the main domestic and international players of this conflict. To do this, it has to reevaluate and monitor the effectiveness of the geoeconomic and diplomatic tools at their disposition, so these can be used in a timely, coordinated, and effective manner towards political democratization and economic liberalization of Venezuela.

Since the campaign trail, President Biden and his team have expressed their concern for the humanitarian crisis taking place in Venezuela, even calling it “the biggest diplomatic challenge” that their administration will face in the Western Hemisphere.

As such, President Biden has been asked about his strategy on this matter, answering that his administration will not only increase sanctions on “the regime and its supporters” but also “push for stronger multilateral sanctions.” President Biden has also confirmed that his administration will continue recognizing Juan Guaido as Venezuela’s legitimate president and that he will work alongside the international community to help Venezuela’s neighbors like Colombia in managing the migratory crisis that the Venezuelan situation is creating in the region.

However, Bloomberg reported that the Biden administration is not interested in increasing the scope of its sanctions, but in opening channels of communication with Nicolas Maduro and his regime. Specifically, the report says that Biden is preparing a team to negotiate the dropping of the American sanctions in exchange for holding free and fair elections in Venezuela between Maduro and the Venezuelan opposition.

The first problem with such an idea is that free and fair elections cannot be held in such conditions. Because as long as Maduro is in power, Venezuela will not have the conditions for a real presidential election. For instance, real elections cannot be held with a state that intimidates voters, with an electoral commission that is completely politicized, or with all politicians in exile, in jail, or afraid to speak up.

The second problem is that the Venezuelan regime will simply not jeopardize its political power just for the removal of the American sanctions. Because if real presidential elections were held, the opposition would win by a landslide. This is the reason no sanctioned regime would take this deal, not Cuba, not Iran, not Venezuela. In fact, this option was already discussed and disregarded in a series of secret negotiations that the regime and the opposition had in 2019, with Norway being the intermediary of such negotiations.

Building a Framework for the Transition

Eventually, the United States will have the opportunity to actually sit and negotiate a transition towards democracy in Venezuela. However, in order to do that, America has to build the conditions for such an outcome to occur.

To do this, the Biden administration has to first identify what are the key interests and weaknesses of the main domestic and international stakeholders of the Venezuelan conflict. This would allow the United States to design a framework that nudges these actors into pursuing a peaceful and democratic transition in Venezuela. By major international stakeholders, I refer to allies like Colombia and Israel, as well as Maduro supporters like Russia, Cuba, and Iran. And by domestic actors, I refer to the Venezuelan military, the opposition, and those in the regime willing to cooperate.

Specifically, regarding its diplomatic tools, if the Biden administration wants to reestablish Barack Obama’s policy on Cuba, this can be used as leverage given the influence that Cuba has on the Venezuelan regime.

Likewise, the United States should put the Colombian government at the center of the decision-making given their experience at conflict-resolution. Colombia is also the country that has been affected the most by the migratory crisis of Venezuela, with more than a million Venezuelan now living in Colombia. The Venezuelan crisis could also jeopardize Colombia’s peace process with the FARC.

And regarding the geoeconomics of the Venezuelan crisis, the Biden administration ought to reevaluate the economic, political, and geopolitical effectiveness of the different sanctions on Venezuela. For instance, while the financial sanctions have been highly effective and desirable, America’s energy sanctions had the unintended consequences of increasing Iran’s influence in Venezuela, which is an argument I made at National Review.

Similarly, the energy sanctions also made the Venezuelan state entirely dependent on illicit sources of income, which has its own consequences. Overall, the policy of sanctions has to be implemented by the Treasury Department in a timely manner, monitored by the State Department in a systematic manner, and applied in coordination with the other tools at the disposition of the administration, such as its ability to influence the policies of the European Parliament regarding Venezuela, which should expand the scope of its financial sanctions.

Based on this thought process, my recommendation to the Biden administration is that it should focus right now on building the necessary incentives so that a political transition in Venezuela becomes a desirable scenario not only for natural allies like Colombia or the Venezuelan opposition but also for key supporters of the regime, from Russia and Cuba to the Venezuelan military and the country’s business elite.

This can be done if the different institutions of the United States work in synergy on building the incentives mentioned above, maybe under the coordination of a separated group or commission focused on Venezuela. If this is not achieved, the Venezuelan conflict will continue; and with it, the Venezuelan humanitarian crisis will keep destabilizing the region, the Venezuelan state will maintain its connections with states like Iran, and overall, the situation will end up undermining the leadership of the United States at the international stage.

Jorge Jraissati is a Venezuelan economist and the president of the Venezuelan Alliance, an international non-profit that explains the causes, analyses the consequences, and brings about solutions to the Venezuelan humanitarian crisis. Jorge has spoken on this issue at universities like Harvard, NYU, and Cambridge.