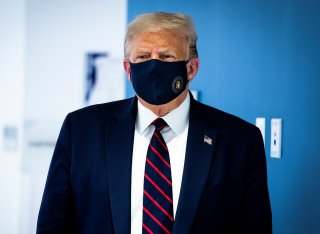 “When I began covering the nuclear file in 1983, most people assumed that the United States president would exercise nuclear weapons with a basic level of care and deliberation,” said Giacomo on a recent episode of the podcast, Press The Button.

“That isn’t to say people didn’t question the president’s judgments or policies. But America was the only country that has ever launched a nuclear attack,” she continued. “And among most Americans there was a great sensitivity to the grave nature of what that meant and all the lives that were lost. The aim was never to use them again.”

Since the 1980s, Giacomo explained, presidents from both parties have reinforced this aim with successive waves of treaties, agreements, and unilateral drawdowns that have slashed the US arsenal and moved nuclear weapons towards the margins of Washington’s strategic thinking.

That process has now stopped. Under President Trump - whose administration she calls “very hostile to arms control” - the United States has pulled out of the Iran nuclear deal and squashed the Intermediate-range Nuclear Forces Treaty, while the Open Skies Treaty and the New START Treaty are at risk of collapse.

Taken together, Trump has effectively re-centered nuclear weapons in American foreign relations, said Giacomo, who catalogued the president’s shift towards a more bellicose nuclear policy - including his televised boast of “let it be an arms race” - in a recent article for Arms Control Today.

It was not an empty threat, she warned. The administration is seeking to pour billions of dollars into the next generation of nuclear weapons - a mere down payment on the trillion dollar modernization effort - while its allies on Capitol Hill have moved towards overturning a moratorium on nuclear testing that has held for nearly three decades.

“In short,” wrote Giacomo, “Trump has made it his mission to tear down rather than strengthen the diplomatic arms control architecture that has forced the United States and Russia to shrink their arsenals and helped prevent most other countries from becoming nuclear powers. It puts the president at odds with his predecessors from Dwight Eisenhower onward, who sought and negotiated or signed one or more nuclear arms control agreements while they were in office.”

But in doing so, Trump may be running up against the times. Eisenhower could rely on the presence of Soviet armies in Eastern Europe to backstop domestic support for an arms buildup. In comparison, today’s adversaries, though concerning, are less natural foils. Despite diplomatic hurdles, China remains interconnected with the American economy and has a far smaller nuclear arsenal than the US. Meanwhile, Russia’s relative diminution since its communist heyday has hampered its ability to threaten Washington’s core interests.

Even more important is the impact of the ongoing national emergencies, suggested Giacomo. “The overwhelming issues are figuring out what to do with the COVID-19 crisis, rescuing the economy, and dealing with the grave legacy of racial injustice,” she said. Solving any of those challenges will require a herculean amount of effort - and funding. In such an environment, starting an expensive, destabilizing arms race just isn’t a priority for most Americans.

Adding to this pushback against new weapons is an increased willingness to question the old rules, too - including the one most central to the White House in the decades since 1945. “Since Trump came to office, the question of sole presidential authority has assumed a much greater importance and a much greater urgency,” Giacomo said, referring to the policy that grants the president ultimate control over the nation’s nuclear arsenal.

Pointing out that the window for a nuclear launch could be “very short,” perhaps minutes, she questioned the ability of any chief executive to perform under that sort of pressure - especially one as impulsive and unpredictable as Trump. “Today, it’s inexcusable to just rely on one person,” Giacomo explained. “There should be some way in which Congress, the Secretary of State, and the Secretary of Defense are required to be part of the decision-making process if this country ever has to seriously contemplate using a nuclear weapon.”

Asked whether Americans can make their voices heard on these issues, Giacomo said yes, adding that there are “pretty basic” steps people can take. “Voters can call and write their Congress members to intensify their focus on nuclear issues,” while “lawmakers and activist groups can make clear that addressing the nuclear portfolio is a priority.”

“And, of course, the media can play a role. Reporters can do stories about the relevant nuclear issues and where they stand and what we’re about to lose,” she continued. “If the newspapers care about it.”

“One hopes that they will.”

The entire interview with Carol Giacomo is available here on Press The Button.