How Donald Trump Can Stop a Nuclear Arms Race 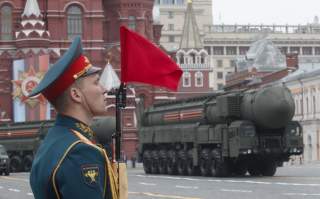 On February 5, 2021, the New Strategic Arms Reduction Treaty (New START) is set to expire a decade after taking effect. New START is a nuclear arms reduction agreement signed by the United States and Russia, the latter of which is eager to see the treaty extended by another five years. Russian President Vladimir Putin proclaimed in December that his country was, “ready to extend the New START treaty immediately, before the year’s end and without any preconditions.”

Unfortunately, it takes two countries to extend a treaty.

Russia’s desire to continue with New START has been met with non-committal responses by the United States. Former Under Secretary for Arms Control and International Security Andrea Thompson stated that it was, “too soon to tell,” whether renewing the agreement was in America’s interest, while subsequent administration officials have expressed only a vague desire to, “think more broadly,” than the treaty. Vladimir Yermakov, director of Russia’s Department for Non-Proliferation and Arms Control at the Foreign Ministry, has reported, “hearing more and more often US officials express their doubts about the need to extend the START Treaty,” while Russian defense minister Sergey Lavrov stated that, “Washington is evading any serious discussion, making public discouraging signals regarding the future of this treaty.”

The Trump administration’s lack of urgency and commitment to preserving New START is dangerous and misguided. New START is the cornerstone of the bilateral nuclear arms control framework which has created stability and prevented nuclear arms races since the Cold War. The treaty is broadly popular with members of both political parties, and Congress has been vocal in calling for its extension. The Trump administration must prioritize extending New START in a manner that accounts for America’s changing security needs, lest the United States exposes itself to a dramatically increased risk of a nuclear arms race or nuclear miscalculation.

New START positively impacts nuclear stability in several ways. First, the treaty places hard caps on the number of long-range nuclear warheads (1,500) and long-range nuclear delivery vehicles (700) that each country can deploy, as well as limiting the number of total launchers available to each country to 800. These are the lowest deployment levels of nuclear ICBMs since the early stages of the Cold War, and New START has helped eliminate the nuclear arms races that once cast a specter over American security policy. Furthermore, the treaty provides for on-site inspections which have not only helped verify that both sides are complying with the agreement, but have helped America gain tangible information about the status of Russia’s nuclear arsenal, which U.S. Strategic Command head General John Hyten has credited with improving American intelligence on this issue.

Allowing New START to expire could risk a new nuclear arms race by signaling that the two states with the largest nuclear arsenals are no longer committed to arms control. If Russia and the United States are unrestrained in their capacity to deploy long-range missiles and produce delivery systems, they could rapidly begin installing nuclear warheads onto existing missiles, with each state looking to gain an upper hand over the other. Additionally, the inability to monitor the status, quantity, and positioning of the other side’s nuclear arsenal will further ratchet up distrust between America and Russia and force each side to assume the worst about the others capabilities and intentions. Every potential conflict point between the United States and Russia, such as Ukraine, Syria, and the Baltics, will suddenly carry the risk of rapid escalation and nuclear miscalculation.

Furthermore, New START’s expiration could not come at a worse time. Not only are tensions between the United States and Russia high due to the threat of Russian election interference, America’s withdrawal from the Intermediate-Range Nuclear Forces Treaty, and the ongoing Ukraine dispute, but America has already made plans to replace and upgrade much of its Cold War-era nuclear arsenal during the coming decade. Russia’s ability to verify America’s commitment to arms control will become more important than ever during this period, as the production of new nuclear weapons could easily incentivize Russia to begin creating new weapons systems of their own, sparking an arms race.

The Trump administration has posited a number of criticisms of New START to justify its hesitance about extending it. The administration has argued that many of Russia’s new strategic nuclear weapons systems fall outside the purview of the treaty, necessitating efforts to rework the agreement. While Trump likely is not truly motivated by this concern (he was spuriously criticizing the treaty long before President Putin publicly unveiled these missiles in 2018), it remains a valid criticism of New START that is worth addressing.

Fortunately, Russia has already conceded that several of these weapons would be subject to New START limitations, and most of the others likely won’t be operational until after the treaty expires in 2026. If the United States has reservations regarding other missiles, they could use treaty negotiations as a way to raise them. As one START expert suggested, Trump could request that Russia’s air-launched Kinzhal missiles not be deployed on Tu-22M3 Backfire medium bombers, a potential combination that violates the spirit of the agreement even if its technical legality is debatable. It makes more sense for America to preserve a treaty that could provide a framework for further negotiations on these developmental weapons than to let it fall by the wayside, especially since the alternative to New START is a world where strategic nuclear missiles can be deployed without restriction.

President Trump also contends that New START is incomplete because China is not bound by it, and that the United States needs to develop a new agreement that includes them. Incorporating China into the international arms control regime is a goal worth pursuing, but not at the expense of New START. China has made it clear that it has no desire to enter into such an agreement given the massive disparity between its nuclear arsenal and those of New START’s signatories (Russia and the United States control more than 90% of all nuclear warheads), and the Trump administration does not appear to have any strategy for persuading them otherwise. Furthermore, the desire to include China in the arms control regime does not justify eliminating the most successful nuclear arms reduction treaty on the planet, especially since the unrestricted deployment of American or Russian long-range nuclear missiles would only incentivize China to develop more nuclear weapons of its own. New START should be used as the foundation to incorporate China into any existing or future arms control treaty, not thrown aside in pursuit of an illusory multilateral agreement which the administration has no real hopes of achieving.

Even if President Trump does want to replace New START with a more comprehensive agreement, he is quickly running out of time to do so. Such negotiations would be a considerable diplomatic undertaking, particularly to convince China to become a party to the agreement. America will be hard-pressed to properly extend the treaty as it exists now given the Trump administration’s lack of urgency, let alone create an entirely new agreement from scratch before New START expires. Even if Trump’s reelection bid were to fail, his successor would have slightly more than two weeks between inauguration day and February 5 to complete this task. With each passing day, the need to commit to the New START extension process becomes more dire.

The United States has slightly more than one year to extend New START before opening itself up to the risk of miscalculation or a nuclear arms race. If the Trump administration makes an honest effort to save the treaty, they can use the negotiation process to address their concerns with its limitations while preserving it as the foundation upon which future, more comprehensive arms control agreements can be built. President Trump simply cannot allow perfect to be the enemy of very good, not when the stakes are this high.

Matt Reisener is the chief of staff at the Center for the National Interest.