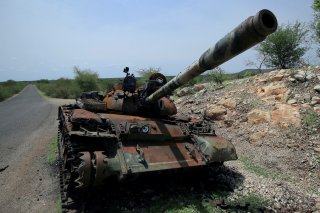 Ethiopia, the second-most populous country in Africa, is in danger of balkanization. With the current ethnic wars between the Tigrayans, Amharas, and Oromos, Abiy Ahmed’s regime is incapable of bringing stability and economic prosperity to Ethiopia. Instead, his regime is indebted to the benevolence of the Machiavellian Marxist dictator in Eritrea, Isaias Afewerki. At a meager operational cost, Afewerki is the strategic winner from the turmoil in Ethiopia. He was able to accomplish three goals: the balkanization of Ethiopia by flaming ethnic conflict; the removal of the Tigray People Liberation Front (TPLF) regime from the political scene; and the delegitimization of Abiy Ahmed’s government domestically and internally by creating an Ethiopia that is ungovernable. Moreover, the marriage of convenience between Ahmed and Afewerki gave Afewerki a window of opportunity to impose strategic military and geopolitical costs at the expense of Ahmed’s regime and, most importantly, Ethiopia.

Thus far, Afewerki is the winner of the conflict in Ethiopia because the turmoil helps keep his regime afloat. Since 1998, the Eritrean regime has used the war with Ethiopia as an excuse to keep the small country on a perpetual war footing. Afewerki deployed troops to the Tigray conflict to give his regime, one of the most brutal dictatorships in the world next to North Korea and Syria, a lifeline. And it seems it is working, but for how long and to what extent?

From Nobel Peace Prize laureate to warmonger, Ahmed’s Ethiopia has begun to resemble the former Yugoslavia, and if it continues to move in this direction, will soon become a failed state. Ethiopia under Ahmed has been experiencing nothing but chaos. Ahmed won a contested election in Ethiopia in 2021, making him prime minister for five years. His government is without much room to maneuver because it must contend with the ongoing conflict in Tigray, radical Amhara and Oromo ethnic militias driving the country towards balkanization, and the Eritrean regime’s interference.

The animosity between various Ethiopian ethnic groups is not new, but a dormant, hostile force kept at bay by the authoritarianism of previous Ethiopian rulers. And now it is being exploited brilliantly by the Eritrean regime. During Afewerki’s more than three-decade-long rule over the country, Eritrea has infamously come to be known as the North Korea of Africa, and he has a lot to gain from an ungovernable Ethiopia hampered by ethnic tensions or an undemocratic Ethiopia that resembles his regime’s dictatorship style. The Eritrean regime does not want an Ethiopia economically and militarily powerful enough to thwart its influence in the Horn of Africa. An Ethiopia divided internally by ethnic division is better for Afewerki than a democratic Ethiopia, which might serve as an example for other East African countries to follow. Afewerki’s primary objective is to prolong his dictatorship in Eritrea, and a democratic Ethiopia, potentially even aligned with the West, could seek to topple his regime or host Eritrean political parties in exile trying to replace the Marxist regime.

The TPLF is no longer a power broker in Ethiopia, but it is an essential factor to the country’s stability. If the conflict persists, the TPLF will be compelled to secede from Ethiopia, and other regions of Ethiopia will follow suit. The conflict that commenced in November 2020 is evolving, putting the future of Ethiopian sovereignty in peril as well as the legitimacy of Abiy Ahmed’s government.

The TPLF fighters have regained the city of Mekelle after battling Ethiopian federal forces, Amhara militias, and Eritrean forces. Ethiopian troops retreated from the city of Mekelle, which Abiy Ahmed’s government claimed was a tactical withdrawal. Now Ahmed has returned with great fury and vengeance to the conflict in Tigray. So far, militias from six regions of Ethiopia are fighting against the TPLF, most notably the Oromia, Sidama, Somalia (Ogaden region of Ethiopia), and Southern Nations Nationalities and Peoples (SNNP) regions. There is no indication that Eritrea has withdrawn its troops from the Tigray region, and it is improbable that it would because Eritrea benefits from the instability in Ethiopia at the expense of Ahmed’s government.

Afewerki may be the strategic winner of the Ethiopian conflict, but this does not mean that the relationship between Ethiopia and Eritrea will be close from here on out. Afewerki’s regime needs internal and external enemies to prolong its rule and, thus, leaving a wounded TPLF intact serves two purposes. First, the marriage of convenience between Afewerki and Ahmed is transactional, leaving their rocky partnership with little to survive on if the TPLF is out of the picture. Without this common enemy, it will be easier for them to fight. Therefore, a bloodied TPLF will serve Afewerki well as a barrier against future Ethiopian military aggression. Second, Afewerki’s regime does not have legitimacy or the consent of the governed in Eritrea. Leaving the TPLF in the game serves to promote the narrative at home that Eritrea is still at war and the region is in turmoil. Consequently, Eritreans will be coerced to trade security for freedom and thus prolong the Marxist dictatorship.

Afewerki’s regime has, after a small investment, become the strategic winner of the conflict in Ethiopia. However, the potential balkanization of Ethiopia (with a population of 118 million people) could destabilize the Horn of Africa and Eritrea’s three-decades-long dictatorship. As one of the world’s most unstable regions, the Horn of Africa is a hotbed for state failure. With two failed states already in Somalia and South Sudan, Ethiopia’s fragmentation will drastically change the region’s geopolitical landscape and potentially trigger a massive humanitarian disaster. It would do the international community well to curtail Isaias Afewerki’s malign influence before he brings additional chaos to the Horn of Africa, much as he did in his own country.

Daniel Haile is a graduate student at Texas A&M University.