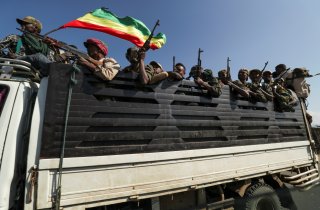 Observers could be forgiven for thinking these days that East Africa is on the verge of unraveling. An ongoing conflict in Ethiopia’s Tigray province is affecting the entire region, with its consequences being felt most keenly in Somalia.

In the Tigray there exists the Tigray People’s Liberation Front, a political party that governed the country up until recently but has since been sidelined following the ascension of Prime Minister Abiy Ahmed in 2018. Discontent with this change, among other factors, resulted in tensions between the TPLF and the federal government under Ahmed. On November 4, forces loyal to the TPLF launched a surprise attack on an Ethiopian military base. Shortly after, the Ethiopian government initiated a counteroffensive, prompting what is now a low-level but tense civil war. The clashes have put regional stability in peril, with neighbors such as Eritrea and Sudan considering whether to intervene. But to the east, it is jihadist-stricken Somalia that is mostly feeling the impact of Ethiopia’s recent hostilities. The crisis has already diverted Ethiopian counterterrorist forces from Somalia, and a protracted conflict may spell disaster for Somalia’s security.

Somalia is the quintessential example of a failed state. The nation has been embroiled in civil strife since the early 1990s, and has been fighting al-Shabaab, a jihadist organization, since 2006. The group, which has ties to Al Qaeda, seeks to supplant the current government with hardline Islamic fundamentalism. The organization reached the height of its power in 2011 before being dislodged from the capital Mogadishu and other key cities by a Kenyan intervention. Following this, al-Shabaab lost considerable swaths of territory and has since been kept relatively in check by the African Union Mission to Somalia (AMISOM), of which Ethiopia is a key participant. Currently, al-Shabaab maintains a significant presence in southern and central Somalia, launching frequent attacks against civilians, the central government, and even neighboring Kenya. The Somalian government, for its part, possesses a weak army, with a 2017 readiness assessment revealing up to 30 percent of its soldiers in its bases remain unarmed. Having such an enfeebled fighting force, the government is heavily reliant on international assistance in its war with al-Shabaab.

As such, to safeguard itself from jihadi influence, Ethiopia has historically been involved in a number of interventions in Somalia. But the eruption of violence in the Tigray region has forced Addis Ababa to reduce its foreign commitments. Last week, around 3,000 Ethiopian troops deployed in Somalia (separate from the AMISOM mission) were withdrawn to support the government’s campaign against the TPLF. Additionally, Ethiopia contributes over 4,000 troops to AMISOM, and while most still remain in Somalia, Ethiopia’s Tigrayan officers serving in the mission are being sent home or kept in their barracks. Furthermore, hundreds of Tigrayan peacekeepers under AMISOM have had their weapons confiscated.

Recent reports disclose the Ethiopian military’s abandonment of posts in southwestern Somalia, an area with a tangible al-Shabaab presence. The region, bordering Kenya, is used by al-Shabaab to launch attacks into the country. For instance: Mahir Khalid Riziki, an al-Shabaab suicide bomber who participated in the killing of twenty-one people in a 2019 attack in Nairobi, entered Kenya through Somalia’s southwest. U.S. military forces stationed in Kenya may also find themselves increasingly threatened by attacks launched across the porous border. In January, al-Shabaab militants killed three United States defense personnel in an assault on a base used by the U.S. military. As such, a reduced peacekeeping force in Somalia’s southwest may have dire transnational consequences.

On top of this, Somalia is set to hold presidential and legislative elections in early 2021. If Ethiopia were to continue shifting its forces from counter-terrorist operations in Somalia, al-Shabaab could use the opportunity to disrupt the political process, plunging the nation into political turmoil. Already, the group has increased the frequency of attacks against civilians in the lead up to the elections.

A continued conflict in northern Ethiopia may see more Ethiopian peacekeepers withdrawn from Somalia, creating a vacuum that may be easily exploited by al-Shabaab militants. At present, al-Shabaab is considered the most formidable affiliate of Al Qaeda, and a resurgence would likely prompt increased attacks against civilian and military targets in the Horn of Africa. Ethiopia has yet to drastically redeploy the bulk of its forces from the African Union mission, but a protracted war in its northern region, along with the prospect of Sudanese and Eritrean involvement, will likely see more troops withdrawn from critical counterterrorist operations in Somalia. If a resolution is not quickly reached in Tigray, the only foreseeable winner may be chaos.