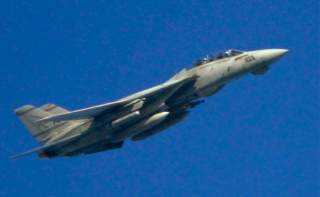 One of the most beloved fighter jets of all time was the Grumman F-14 Tomcat. The F-14 had a lengthy career as a defender of the U.S. Navy’s carrier task forces and then multi-role fighter before retiring in 2006. Few people realize however that the F-14 earned the dubious distinction of being one of the few aircraft to ever shoot itself down, an accident that hasn’t been duplicated since.

The F-14 Tomcat was designed to provide a first-class air superiority fighter for the U.S. Navy. A large, twin-engine fighter with a powerful AWG-9 radar and not two but three types of air-to-air missiles, the Tomcat was equally at home intercepting Soviet bombers at long ranges and dogfighting with MiGs. In the final years of its career, the F-14 would evolve into a strike aircraft, capable of carrying the Paveway series of laser-guided bombs.

The F-14 Tomcat was developed in the early 1970s, in response to U.S. Navy air combat experiences in the skies of Vietnam. One of the three missiles carried by the F-14 was the AIM-7 Sparrow medium-range air to air missile. The Sparrow was a radar-guided missile that worked in conjunction with the F-14’s (at the time) world-beating radar system. Once launched, the Sparrow would be guided to the target by signals sent from the launch aircraft, as the AWG-9 tracked the enemy target. This allowed the Sparrow to engage targets beyond visual range. (The Sparrow was eventually replaced in U.S. Military service by the AIM-120 AMRAAM missile.)

On June 20, 1973, something unexpected happened during weapons testing in the skies over the Pacific Ocean. Grumman test pilots Pete Purvis and Bill “Tank” Sherman were flying an early production F-14 over the Pacific Missile Test Range off the coast of Southern California, preparing to launch an AIM-7 Sparrow missile when disaster struck. The plane, struck by its own missile, quickly caught fire and went out of control. The two pilots ejected the stricken aircraft and were rescued, unharmed, on the ground.

The AIM-7 Sparrow missile was not launched like other missiles. Missiles such as the AIM-9 Sidewinder were carried aloft on launcher rails, igniting their motors, sliding off the rail, and then streaking off to find their targets. The AIM-7 was carried flush with the lower fuselage of the aircraft, with half of the missile and guidance fins recessed inside the airplane. Once the pilot pulled the trigger, explosive bolts released the missile, which went into freefall downward. The missile’s rocket motor would kick in and the Sparrow went on its way.

At least that was how it was supposed to work. On that day in June 1973, Purvis and Sherman believed theirs would be a relatively uneventful test launch. Engineers had assured them the missile would drop as planned, and similar Sparrow launches from other stations on the aircraft went off without a hitch. After all, a similar launch system was used for the Sparrow missile on the F-4 Phantom II, the Navy’s current frontline fighter.

During the test flight, the aircraft was flying at 0.95 Mach at an altitude of 5,000 feet. At the moment of truth, Purvis pulled the trigger that was supposed to send the  AIM-7E-2 test missile on its way. The aircrew heard a much louder launch noise than they’d heard before and the missile passed the nose of the Tomcat. To their surprise, the two jet pilots saw the Sparrow tumbling end over end, spewing fire.

Things moved quickly at that point. The botched missile launch had created debris, which the F-14’s left side Pratt & Whitney TF-30 afterburning turbofan engine instantly ingested. The engine quickly caught fire, and Purvis lost control of the stricken aircraft. Purvis and Sherman ejected, parachuting in the waters of the Pacific Ocean below. Both men managed to scramble into life rafts and were picked up, safe and sound, by rescue helicopters vectored in by chase planes that had seen the entire incident.

The F-14 was one of the greatest fighters of the postwar period, but it wasn’t without its share of development problems. The 1973 incident is a clear example of why weapons systems, particularly aircraft, undergo exhaustive testing to ensure they are safe to use. The F-14 will forever be known as one of the few U.S. military aircraft to shoot itself down, helping to contribute to legendary warplane’s colorful reputation.