How the F-15 Jet Is Adjusting to the 21st Century 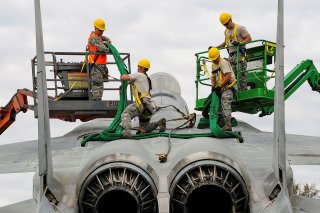 The Air Force’s first F-15EX Eagle II aircraft will take to the sky as part of a fast-tracked effort to integrate the new jet into the force and bring its new technologies into the service’s fast-emerging mesh networking of combat nodes in multi-domain warfare.

The newly upgraded jet, first delivered to the Air Force earlier this year, will introduce a sphere of next-generation types of technical applications to include advanced electronic warfare, active electronically scanned array radar, ultra-high-speed computer processing as well as a number of additional adaptations intended to support future combat operations.

There are many elements to this, based in large measure on the broad recognition that the 1980s-era aircraft is, essentially, an entirely different jet that it was decades ago. Elements of the basic airframe structure are similar. However, the F-15EX jet is now engineered with a new generation of technologies intended to reshape its tactical significance when it comes to high-end warfare. Many of the innovations woven into the F-15EX jet also build upon previous upgrade efforts taken up by Boeing to extend the aircraft into the 2040s and beyond.

The F-15EX jet will fire hypersonic weapons, hit speeds of Mach 2.5, bring new generations of radar and electronic warfare, and operate computer processors able to perform eighty-seven billion functions per second. Several years ago, the F-15 jet was integrated with the fastest jet-computing processor in the world, called the Advanced Display Core Processor which, Boeing innovators have explained, does indeed perform eighty-seven billion computing functions per second. The processor was first introduced several years ago.

Interestingly, while the F-15EX jet is engineered with interfaces and fire control technologies to operate a much wider sphere of weapons, some of the greatest advantages built into the aircraft may reside in the realm of sensing, networking, threat detection systems, and electronic warfare. Many of these attributes closely align with the kinds of sensing, computing, and electronic warfare applications known to be fundamental to fifth-generation assets such as the F-35 jet. Just how comparable is an F-15EX jet in this respect, as many regard the F-35 jet’s advantage as a so-called flying computer to reside in the fidelity, range, and integration of its sensing, radar, threat warning, and information sharing systems.

One key indicator may be that the Air Force plans to use the F-15EX jet as part of crucial Joint Domain Command and Control exercises during the upcoming Northern Edge exercise, as cited by Air Force Magazine. This is quite significant, as sensor-to-shooter multi-domain, multi-mode networking, it is very safe to say, could be described as a massive priority for the Air Force as it seeks to further pivot toward preparations for more expansive, disaggregated yet highly networked warfare intended to leverage a kind of meshed war space wherein artificial intelligence-enabled sensors and weapons can, as senior Air Force weapons developers like to explain it, operate at the speed of relevance. The concept, as previously described by Air Force European Commander Gen. Jeffrey Harrigian as a need to connect any sensor to any shooter, meaning a highly integrated battlespace could share targeting specifics across unprecedented ranges to execute precision strike operations and stay ahead of an enemy’s decisionmaking cycle.