How Far Are We From Developing AI-Powered Tanks? 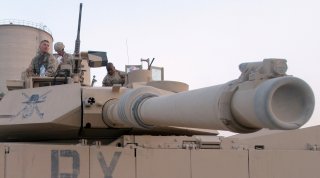 A remote control tank could be in the near future, but a killer robot tank is likely still many years away.

The future of the tank could be one that is controlled remotely, but experts agree that it could be years – even decades – before there are truly fully autonomous tanks, and even then the weapons systems will still be controlled by a human, not artificial intelligence.

When the tank was developed during the First World War it was to help break the stalemate that resulted from trench warfare, which produced static lines resulting in mass casualties. Yet, even in the armored beasts the tank's crew still faces numerous threats from ever more powerful anti-tank weapons. Thus the best way to ensure the crew's safety is to take them out of the tank.

The Russian Aramta T-14 could be among the first of such "autonomous" or self-driving tanks – but so far the automation falls short of a true "terminator" style weapon. It does feature a remotely operated turret, while the crew sits lower in the tank. The eventual goal for the Russian military is to remove the crew completely and have the tank controlled remotely but even that isn't exactly a fully autonomous fighting vehicle.

Similar efforts are also underway in the United States.

"One key program is the Army's Next Generation Combat Vehicle (NGCV)," Hernandez told The National Interest. "Part of that program includes technology maturation initiatives for advanced lethality and accuracy systems for medium caliber weapons. Under those initiatives there is one particular project in the works titled the Advanced Targeting and Lethality System (ATLAS) that better describes some of Army's AI effort."

"The most important weapon is situational awareness, and there are AI-based tools to help a lot with this," Jim Purtilo, associate professor of computer science at the University of Maryland told ClearanceJobs last year. "Visualization, communication, simple planning, these all go together at squad level."

And even when we get to the point that a tank or other military vehicle could control itself by being autonomous that wouldn't likely include the weapons. Groups such as the Future of Life Institute have called upon a ban of autonomous weapons to prevent even the start of a global AI arms race.

However, the role of a remote-controlled or even semi-autonomous vehicle would be to reduce the need to put a human crew in harm's way.

"Bottom line is that the Army's focus is on developing smart weaponry that can automatically detect and assess threats giving the human controller enough time to react," added Frost & Sullivan's Hernandez. "We are still a long way (if ever) from completely releasing total control of lethal decisions from human control."