How Fast Does Your Internet Need To Be To Stream Netflix (Or Anything)? 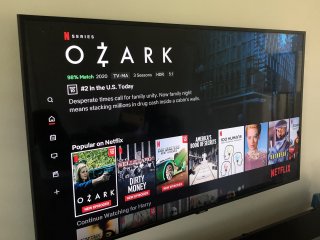 With literally half the people in the world currently under stay-at-home orders, many of those people are passing the time by streaming.

That's a lot of streaming, clearly, which has led to both a surge in subscriptions to every major streaming service, and several of the major technology companies agreeing to throttle their Internet speeds in Europe. Video streaming, after all, puts much more of a strain on networks than any other form of Internet traffic.

Therefore, especially with a lot more people on a lot more devices home at the same time, it's imperative to have a strong-enough home Internet connection in able to handle that load.

Which one are you using? It's important to note-just because you own a 4K TV, doesn't mean you're watching in 4K. The majority of TV programming is not in 4K, and your Netflix or Hulu streaming is only coming in 4K if you've subscribed to a 4K plan.

The government agrees. According to guidelines from the FCC, in its Household Broadband Guide, for "Advanced Service” — "Basic functions plus more than one high-demand application running at the same time," for four users or devices at a time —  it's recommended that households utilize a speed of more than 25 Mbps. You can probably get away with slower service if you live alone or don't watch much streaming video.

But otherwise? Keep your speed up to 25 Mbps at least, when you're picking out a router or wireless Internet plan with your ISP.