How Finding the 'Missing Fingerprint' Will Help Us Fight Climate Change 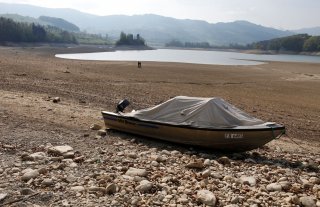 Our understanding of the Earth’s climate has advanced rapidly in recent years. In response to global warming, climatologists have developed excellent models looking at the behaviour of the atmosphere and its linkage to both the solid land and the oceans.

For instance, we have uncovered the driving force behind El Niño, and can now make quite confident predictions of when it will strike and impact the global rainfall. We have also even learned how to predict the wild turbulence of tropical cyclones with sufficient accuracy to save thousands of lives.

But, frustratingly, there are still aspects of the atmosphere’s behaviour that we do not fully understand. One of these is the missing “fingerprint”. All our models say there should be a signal caused by increasing carbon dioxide which is so characteristic that it is like a fingerprint proving that the thief was there. The signal is part of the upper atmosphere warming more quickly than at the surface. The result should be a doughnut of air circling the earth at the tropics, which is warming far faster than the rest of the atmosphere.

The Fourth Assessment by the Intergovernmental Panel on Climate Change in 2007 not only showed the fingerprint very clearly, but also showed how it would grow and contribute to global warming as carbon dioxide concentrations increased:

The report triggered a great search for the fingerprint. But, by the Fifth Assessment, in 2013, there was low confidence in the data. In 2014, the American Physical Society convened a debate on the topic. Now, four sets of really reliable data had been found. These were records of balloons flown from four different weather stations. As they rose, instruments on the balloons had radioed back their position, the pressure and the local temperature. Such instrumented balloons are called radiosondes or just sondes. They showed that the fingerprint really was missing.

The tropical temperature profiles are shown on the diagram. The horizontal axis is the rate of change of temperature per decade, over the period 1979 to 2012, and the vertical axis shows the altitude. The red lines show the results of 29 different runs of the models. They had a wide range, between the solid maximum (“max”) and dashed minimum (“min”) line, with the average (“avg”) shown by the red squares. The blue lines show the same features of the sonde data, with the average shown by the blue dots.

Why we should worry

The models predict that the atmosphere should warm faster than the ground as the altitude increases. The sondes show an effectively constant rate of warming of 0.1℃ per decade up to 10,000m.

The data all predict faster warming at the North Pole, and that is precisely what we observe. So the models are almost right.

But without understanding why the fingerprint has failed to appear, our predictions of precisely how the rest of the globe will warm as carbon dioxide concentrations increase are rather uncertain. Wrestling with the complexities of the atmosphere, using the largest computers available, makes climatology one of the most fascinating of all sciences – and life depends on it.