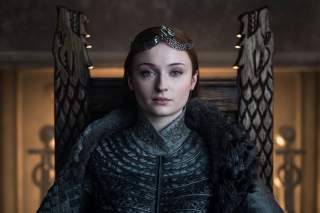 Game of Thrones, the exceedingly popular TV series, has finally come to an end. This in and of itself is a remarkable achievement: the book series which the show is based upon was supposed to be “unfilmable.” Instead, the “unfilmable” show became one of the most successful cultural phenomena of the modern age—a veritable monoculture that captivated millions of viewers around the world with its tales of courtly intrigue, its gritty and realistic depiction of medieval warfare, and its message that the moral arc of the universe bends towards karmic justice.

That last bit deserves further reflection. George R.R. Martin’s (GRRM) A Song of Ice and Fire book series, upon which Game of Thrones is based upon, is essentially about man’s unending capacity for both good and evil. In a revealing 2012 interview with Canada’s CBC, GRRM discussed how he was a conscientious objector to the Vietnam War and how his beliefs about war and violence influence his books. In his words: “If you’re going to write about war and violence, show the cost. Show how ugly it is. Show both sides of it.”

Game of Thrones Fans: Check Out Our New Mini-Section with article after article of GOT content that connects with the national security and foreign policy challenges of today.

GRRM’s characters exemplify this attitude towards war and violence. Take, for example, Arya Stark. In GRRM’s books, she is a child of no more than nine years when she accompanies her father down south to the capital city of the Seven Kingdoms, King’s Landing. Her cheerful days of learning swordsmanship are cut short when her mentor is killed, her father is executed in public for supposed treasonous acts against the crown, and her older sister Sansa is essentially kept as a hostage by the royal family. As if these events were not already traumatizing enough, the Seven Kingdoms shortly thereafter plunges into a destructive civil war that sees most of her remaining family killed off in particularly gruesome ways. Arya is left utterly alone and isolated in the middle of a war.

She resorts to desperate measures to survive. She constantly takes on new identities to remain hidden, to the point she starts to lose herself. This process culminates with her eventual admission into a guild of mystical assassins that are required to relinquish their former identities (in some cases, literally, with the removal of one’s own face), becoming “no one.” All this helps her dissociate herself from the cruel reality she lives in and to escape the horrors that she has had to endure. The only things truly sustaining her at this point are hatred and vengeance. She composes a list of individuals responsible for the deaths of her family members and dear friends. She aspires to personally murder all these individuals, repeating the list to herself every night as if it were a personal prayer.

Arya stands as the quintessential example of not only how war and conflict make victims of the innocent, but also how these victims themselves turn towards hatred and revenge, perpetuating the endless cycle of violence and misery that only results in more pain and a loss of humanity. How many real-world child soldiers in Africa and the Middle East have personal stories like Arya’s?  Should we, as human beings, not wish to prevent the innocent from suffering the fate of Arya Stark?

Fans of the television show, however, apparently see something entirely different. For them, Arya’s transformation into a revenge-driven, face-wearing assassin is the epitome of cool. What of her ruthless extermination of the entirety of House Frey, which was responsible for her brother and mother’s deaths? Viewers went wild and enjoyed every second of it. For them, the Arya slitting the throat of house patriarch Walder Frey, and her subsequent poisoning of every male Frey at a banquet, was well-deserved retribution delivered in a most eminently satisfying manner. What of Arya’s execution of Petyr Baelish, the conniving and duplicitous intriguer perhaps most responsible for the civil war that engulfed the realm? It received an outstanding ovation by viewers for this sublime delivery of well-deserved justice.

The list goes on. And while some (possibly, probably, most) of the characters Arya kills are irredeemably vile individuals, one cannot help but reflect on what is happening here: people are cheering on a character, a young girl, who has seemingly absorbed the lesson that murdering your problems and enemies away is the optimal solution to everything.

The Sins of the Father

Eddard “Ned” Stark, Arya’s father and Lord of Winterfell (essentially, ruler of the northernmost kingdom of the Seven Kingdoms), is another example of someone who is seen in a different light by television show audiences. In the early books and the first season of the show, his entire character can be summarized as standing by what is right and just—which ultimately results in his execution when the less-than-honorable House Lannister sets him up for treason. On a certain level, the audience is led to believe that this tragic outcome is self-inflicted: Ned’s quaint belief in honor whilst living in a nest of insidious vipers, even as it is made abundantly clear that no one is in this city is to be trusted, led to his downfall. Meanwhile, the Lannisters felt no compunction about lying and cheating if it means succeeding in the eponymous game of thrones. Good, it would seem, can take the backseat when it comes to matters of political survival and success.

Yet in later books and seasons of the television show, we see the price of these respective approaches. For House Lannister, this means facing enemies on all fronts—even when they’re in charge. Their reign is almost snuffed out in the very beginning, when the smallfolk (Game of Thrones parlance for the peasantry) start rioting over food shortages (created by the civil war the Lannisters started with their execution of Ned) and by the Lannister’s brutal and very public massacre of the previous king’s bastard children. The family’s grip on power is tenuous at best, requiring them to constantly seek new allies, who themselves tend to be as opportunistic and conniving as the Lannisters (if not more so). The simple reality for the Lannisters is that no one trusts them precisely because they have a long history duplicity and betrayal. Their capacity for it is well known to all.

By contrast, the Stark’s bannermen in the North flock to the family’s cause. When Ned is imprisoned by the Lannisters, his eldest son Robb rallies his kingdom to march down south and rescue his father, even if they stand to gain nothing from doing so, and potentially losing much. When the Lannisters execute Ned, Robb and his bannermen take such umbrage at this outrage that they declare outright secession. Robb is crowned “The King in the North” by his subjects. Such is the loyalty that the Stark family (including Ned) cultivated with their just and honorable rule over the centuries—it lasts beyond the reach of death itself. Even after Robb is killed by the treacherous bannermen of House Bolton, which usurps House Stark’s position, the other bannermen of the North eventually rally to the surviving Starks, who take back their kingdom at the Battle of the Bastards.

This message—that just and honorable rule inspires greater loyalty in those who are ruled, while scheming and betrayal alone results in diminishing returns—is muddled in the latter seasons of the television show. In the show (the books have not reached this point), Jon Snow (presumed bastard son of Ned Stark and acting on behalf of his legitimate sister, Sansa Stark) and his forces are on the verge of being annihilated at the Battle of the Bastards. They are saved at the last second by a fresh force of thousands of knights led by Sansa Stark and Petyr Baelish, who, through careful plotting and murder, managed to become the acting regent of a neighboring neutral kingdom nominally ruled by the Starks’ maternal cousin. In other words, the Stark cause is shown to be saved not by the virtues of their rule, but by resorting to trickery and intrigue as well. Even as late as the previous season, Ned’s children reflect on how their father’s foolishness resulted in his death, and that they (his children) had to be smarter than he was.

The message that the audience took away from all this? That Ned was in the wrong; a lack of guile can only result in death and defeat when it comes to the nitty-gritty world of politics.

The Road to Hell is Paved with Good Intentions

If there is one character that is the exemplar of GRRM’s conception of an individual’s capacity for both good and evil, it is Daenerys Targaryen. Hers is a tragic journey. The exiled daughter of a former monarch deposed for his madness and tyranny, she begins her rise to power in the books and television show at the age of fourteen, with her only assets being her name, her claim to the throne, and the fact that she is a pretty young girl. By the time the show reaches its climax, she has racked up numerous titles, laid waste to entire nations, and has an army personally loyal to her alone numbering in the tens of thousands—and, of course, city-ending dragons.