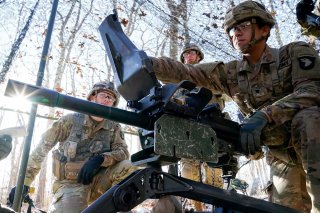 TNI: What are some of the main challenges your Command is thinking about in terms of future warfare?

Murray: “First you figure out the environment and then you figure out what you need to fight in the environment. Concepts should drive material developments and S&T should drive concepts too because a big piece of this future operating environment is tech forecasting. There is a tech forecasting cell at the Army Research Lab, not only from a U.S. Tech base but worldwide which looks at where the investments are being made and where we are going to be in technology in 10 to 15 years.”

TNI: Many are talking about cloud technology and the extent to which large weapons platforms will function as “nodes” in a meshed, multi-domain network?

Murray: “Cloud architecture and tactical cloud are going to be absolutely critical to what we do in the future. Any sensor and shooter and any C2 (Command and Control) node. When you start talking about “any” you will run into some bandwidth issues. We have a saying in the Army for as long as I have been in the Army which is “any soldier is a sensor.” I see a point in the future where everything on the battlefield is a sensor.”

TNI: What do you see as some of the major advantages of using cloud networking?

Murray: “Munitions are sensors, air vehicles are sensors... I just see a plethora of sensors. It all comes down to the data. When you talk about the cloud, it is about having someplace for that data to go where it is successful. All that data has to be available and then it is all about having the ability to get the right data out of the cloud to the right shooter through the right C2 node, so that you don’t have these massive bandwidth requirements on every platform everywhere.”

Murray: “An Excalibur shot hit 63km. It pretty much doubled the range. Then we have the non-precision XM1113, a new round which we have shot over 70km. What is next is providing the accuracy we need. So, we need to modify some of our precision guidance kits to deliver that round. That is on track to be ERCA (Extended Range Cannon Artillery) in 2023. XM1113 is not as precise. Right now we fire dumb artillery rounds with a PGK (Precision Guidance Kit), so this is adopting a PGK to a new range. You are shooting at longer ranges and the round is going higher in the atmosphere where you are dealing with thinner air so the dynamics are different. That is also for FY 2023.”

TNI: How was the recent test with the Army’s Precision Strike Missile which, I understand, seeks to eventually fire 500km?

Murray: “The precision strike missile flew out for test number 3 at Yuma. That is our post-INF solution for rockets. We have not tested it beyond 500km yet, but that is coming up within the next month. The thing most people miss is about the range. The current missiles can go about 350km and this will go beyond 500km eventually. We are almost doubling the range with existing launchers so we are not having to invest in new launchers. We can now put two missiles in the launcher as opposed to what we can do now which is one.”