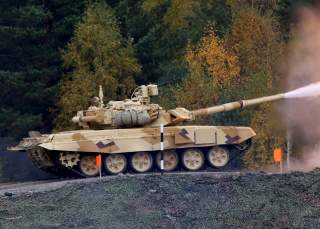 Key point: Moscow's new tanks are modernized and more capable than previous versions. However, it remains to be seen how many Russia decides to produce.

The Russian army will receive its first new T-90M tanks as part of a batch of 400 armored vehicles heading for the ground-combat branch in 2019.

The T-90M, arguably Russia’s most advanced front-line tank, is a modernized version of a vehicle that first entered service in 1993.

"This year, over 400 new and upgraded armored vehicles are due to arrive for the troops,” Russian defense minister Sergei Shoigu said on June 4, 2019.

“They include T-72B3M tanks with the domestic sighting and observation system, T-90M Proryv-3 and T-80BVM tanks and BMP-1AM infantry fighting vehicles," Shoigu said.

"In addition, the factory [Uralvagonzavod] is developing the T-15 newest infantry fighting vehicle based on the Armata platform and featuring the Kinzhal combat module and a 57-millimeter gun. The vehicle’s prototype will be featured at the [Army-2019] international military and technical forum in June.”

Shoigu did not say how many of the 400 new vehicles would be T-90Ms, but state media organization TASS earlier in 2019 reported that the army this year would receive a “battalion set” of the tanks, or around 40 vehicles.

The Russian army fields around 40 combat brigades, each with one battalion of tanks.

The T-90M features a new engine and the latest version of the Relikt explosive reactive armor kit. The T-90M “considerably surpassed” the older T-90A in “combat efficiency” during the Zapad-2017 war game, the press office of Uralvagonzavod told TASS.

The Kremlin has prioritized the T-90M over the more ambitious Armata tank, a highly sophisticated but less reliable vehicle. The Russian army, like the U.S. Army, has had better luck gradually upgrading its main fighting vehicles than it has inventing brand-new replacement vehicles.

The American ground combat branch in 2019 has begun fielding the M-1A2C version of its iconic M-1 tank, the original model of which entered service in the early 1980s.

The T-90 actually is a development of the older T-72. The T-72/90 family of tanks is simpler to build, support and operate than is the contemporary, but more sophisticated, T-64/80 family of tanks.

The Russian army deploys a mixed force of T-72s, -80s and -90s. Russian factories continue to churn out upgraded versions of each type of tank. On the balance, Russian armored forces “significantly” have improved since 2010, the U.S. Defense Intelligence Agency explained in a 2016 report.

Since 2010, there have been significant improvements in the condition of Russian ground arms, including the modernization and upgrade of the main battle tank (MBT) inventory. The active inventory includes the T-72, T-80U and T-90 MBTs. The T-72 is one of Russia’s oldest active MBTs and has been upgraded to include substantial enhancements in explosive reactive armor, electronic components and enhanced navigation systems. Russia’s newest in-service MBT, the T-90, features the new Sonsa-U sighting systems and Shtora soft-kill active protection system. While Russia’s ministry of defense planned to phase out the T-80, the Omsk Transport Machine-Building Plant, one of Russia’s two MBT production and modernization facilities, is planning to upgrade the T-80U with Sosna-U, Relikt third-generation dynamic protection complex and advanced radio and [command and control] systems.