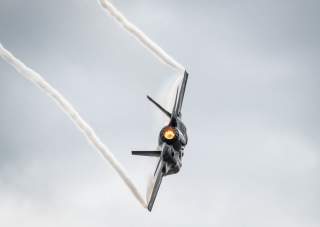 However, their opponents would be able to spot the American fighters as they enter visual range thanks to the Mark One human eyeball, as well as infrared and electro-optical sensors—and even radars, which are effective against stealth aircraft at short ranges. The stealth fighters could be targeted with heat-seeking missiles, more of which could be carried by the non-stealth aircraft. If the opponents retain a significant numerical advantage, than within-visual range combat could be quite risky.

But why would stealth fighters risk engaging in short range in the first place?

Why? The hostile aircraft didn’t have trouble detecting the tankers supporting the U.S. forces. Unlike the F-22s and F-35s, tankers have neither the speed nor stealth to evade a determined attack.

If the tankers get shot down, it doesn’t just force the U.S. fighters to abandon the fight. It could force them to crash into the ocean, without enough fuel to make it back to base. In effect, a tanker would be a high-value target that U.S. air-superiority fighters would need to defend to the last.

A similar problem exists while defending an aircraft carrier from attack. Unlike the resilient city of London in the Battle of Britain, a carrier is a vulnerable and militarily consequential target that must be defended at all costs. A lost carrier consigns its fighters to the ocean as well.

A final consideration is that opponents may field limited number of their own stealth fighters, such as the J-20 or the Sukhoi T-50. Even a small number of stealth fighters would be effective at sneaking into the range of the tankers and AWACs aircraft and taking them out before the U.S. aircraft could evade or retaliate. Very long-range missiles such as the R-37 and the PL-13 could also assist in the anti-tanker mission.

There are limitations to the “overwhelm with numbers” strategy.

In ground warfare, consider what would likely happen if an attacking infantry unit were to sustain 33 percent casualties attacking an objective. More often than not, the attackers would halt their advance, if not beat an outright retreat. Not only do fear and stress from incoming fire and casualties cause soldiers to abandon an attack, but disorganization and confusion set in as communication becomes frantic and links in the chain of command are eliminated.

The RAND wargame results hinged on ten surviving pilots shooting down the U.S. tankers after sixty-two of their compatriots were shot down. How coolheaded and rational would these pilots remain while their unit suffered 86 percent casualties?

Air warfare does have different psychological and physical dynamics than ground warfare. There are historical incidents in which aerial units pressed home attacks despite sustaining very heavy casualties, even up to 100 percent. However, there are also instances in which aerial attackers aborted in disorder after taking losses.

Implementing a swarm attack would also be no simple matter. Concentrating large numbers of aircraft would be a logistical challenge. They would also need to attack a target that would force American fighters to engage in such adverse circumstances.

How can U.S. doctrine adapt to this challenging scenario?

Already, many theorists believe that carriers would be forced to remain far away from hostile shores. The survivability of airbases in the event of a mass surface-to-surface missile attack is also open to question. One possibility is that no large-scale air battles would materialize.

The two key limitations are logistical: lack of internal fuel to operate without support, and insufficient missiles to tackle superior numbers. For the time being, there is no obvious fix to the fuel problem: the latest U.S. fighters, the F-22 and F-35, are simply going to depend on tankers. Some suggest that the Navy should deploy light-weight low-observable drones from carriers that could potentially operate further afield.

What about increasing missile capacity?

The U.S. military is a big proponent of networked warfare. In theory, if one airplane detects an enemy, it could pass on that data to friendly ships and aircraft—and through Cooperative Engagement Ability, even potentially allow those friendlies to shoot at that target from far away. One potential tactic is to use a vanguard of stealthy fighters to identify incoming enemy aircraft and send targeting data to ships or non-stealth fighters, which can carry heavier weapons loads. The F-35’s excellent sensors and datalinks could make it effective in this role.

There is even an idea being kicked around to mount large numbers of missiles on a B-1 or B-52, which would be fired off hundreds of kilometers away from the battle. Of course, such an “arsenal plane” would be vulnerable if enemy fighters broke through the accompanying line of F-22s and F-35s. The tactic would likely require even longer-range missiles than the U.S. currently employs.

Ultimately, hit-and-run tactics leaning on BVR and stealth technology may be quite effective in securing air superiority. However, they won’t suffice to overcome constraints of fuel and weapons supply in scenarios that involve distant and more numerous opponents attacking high-value targets.

Sébastien Roblin holds a Master’s Degree in Conflict Resolution from Georgetown University and served as a university instructor for the Peace Corps in China. He has also worked in education, editing, and refugee resettlement in France and the United States. He currently writes on security and military history for War Is Boring. This first appeared in September 2019.