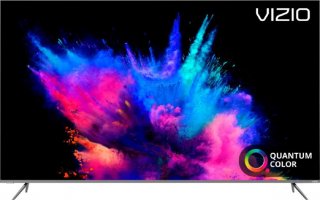 A review of the overall P series on 4K.com in December gave it a total score of an A, including an A+ on both features and price.

“In really basic terms, this 4K TV is awesome almost across the board,” the review said. “And aside from a few minor issues, we could easily rank it in a high spot among the best 4K HDR LCD TV models from all brands for 2019 and early 2020.” The review went on to praise the series’ gaming performance, motion handling, black level and contrast performance and HDR capability, while listed negatives included the native smart TV platform, and the inability to download new apps.

Rtings.com gave the P series an overall score of 8.2.

“The Vizio P Series Quantum 2019 is a great 4k TV,” the review said. “It looks good in a dark room thanks to the excellent contrast ratio and great local dimming feature. It has very good motion handling, with an excellent response time, which is great for gaming, and it has outstanding low input lag on the dedicated low latency HDMI port.” That review praised the “great peak brightness,” deep blacks and local dimming, and an “outstanding wide color gamut.”

Amazon's viewer ratings for the P759-G1-which seem to be spread across the entire P series-have an average star rating of 4 out of 5, out of 258 customer ratings. The five-star reviews are 58 percent, with another 19 percent four stars, and 13 percent giving it one star.

“Bought the 75 inch model, saved over $500 compared to comparable Sony and Samsung models, but don't feel I comprised at all over picture quality,” one five-star review said. “Picture is vivid and stunning.”

“This TV sets the bar now for all LED TVs going forward,” another five-star review said. “The picture quality is OUTSTANDING.”

As is often the case with TV reviews, the one-star ratings consist largely of complaints about bum units and lackluster customer service, one reviewer called it "just an OK TV, and not worth the money.”

Stephen Silver, a technology writer for the National Interest, is a journalist, essayist and film critic, who is also a contributor to Philly Voice, Philadelphia Weekly, the Jewish Telegraphic Agency, Living Life Fearless, Backstage magazine, Broad Street Review and Splice Today. The co-founder of the Philadelphia Film Critics Circle, Stephen lives in suburban Philadelphia with his wife and two sons.