How Hamas Is Strengthening the Turkey-Iran-Qatar Axis 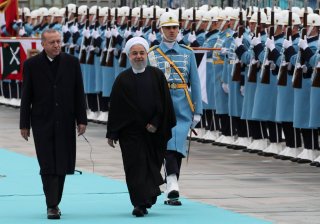 Hamas and the Palestinian Islamic Jihad (PIJ) fired over 4,000 rockets into Israeli cities during the latest outbreak of violence between Israel and Gaza. The magnitude of missiles and rocket launchers that were used indicate the Palestinian militants were able to circumvent Israel’s blockade on the strip. According to Libyan intelligence officials, radical militant groups in Libya funded by Iran, Turkey, and Qatar—using the relative lawlessness of the adjacent Sinai Peninsula—are responsible for smuggling arms into Gaza.

The Libyan civil conflict has evolved into a full-blown proxy war in recent years, with multiple foreign actors joining in to achieve economic gains or to uphold ideological convictions. Turkey and Qatar, both of whom considered Egypt under President Abdel Fattah al-Sisi to be among their most bitter strategic rivals, entered the conflict to back the Tripoli-based Government of National Accord (GNA), led by Prime Minister Fayez al-Sarraj. Both Ankara and Doha have sent thousands of Syrian and Somali mercenaries to Libya, ultimately shifting the tide of war in the country against the Egyptian-backed (and last-elected) Libyan government ruled by general Khalifa Haftar. Among the militias sent to fight in Libya are radical Islamist groups with ties to Hamas, a designated terror group by the United States and European Union. Libyan officials have accused Turkey and Qatar of exploiting the conflict in Libya to use as a platform to fund Hamas’ terror platform in Gaza.

Iran, an effective user of proxy warfare across the region, has also deployed militias to Libya to support Hamas’ cause in Gaza. The link connecting Tehran to Gaza’s arsenal is well documented. Both Hamas and PIJ leaders are on record stating that the weapons used to attack Israel in the latest round of fighting were provided by Iran. In a translated video published by the Middle East Media Research Institute (MEMRI), a Hamas official disclosed that the terror group’s weapons are bought with Iranian money, their activities are supervised by Iranian experts, and their weapons all have the Iranian signatures. Hamas leader Ismail Haniyeh outright thanked Iran for its money and weapons.

Turkish involvement in Hamas’ weapons depot buildup also extends past militia use in Libya. In October 2020, a U.S. district court ruled an Istanbul-based bank, Kuveyt Turk, knowingly provided financial services to Hamas operatives in Gaza. Four months later, Israel confiscated over $120,000 along with shipping containers full of merchandise sent to Hamas operatives in Gaza from Turkey. Ankara’s longstanding support for Hamas is often overshadowed in the media by Iran’s assistance to the militant group.

Turkey’s support for radical Palestinians acquired a novel and chillingly threatening dimension in this recent round of fighting. Turkey has spent years and much money to fund leaders, organizations, foundations, and land purchases in order to weaken Israel’s control of the situation within Israel itself, among Israeli Arabs, and in particular, over events in Jerusalem, the liberation of which from non-Muslim rule the Turkish president has often stated is a prime objective. The most dangerous development in the recent round of conflict was Hamas’ ability to implement Turkey’s efforts. The missiles were difficult for Israel, but they were also expected. In contrast, it was shocking for Israelis to see Hamas not only to appeal emotively but to even command operationally some Israeli-Arabs, let alone Palestinians, and through that, to dictate the pace of events on the Temple Mount and devastate Israel’s control over and the security within its cities with mixed populations, and on the highways across the country. Iran had never managed to achieve that through its Hamas factions; this was a Turkish accomplishment.

Qatar also contributes mightily to Hamas’ terror enterprise. In addition to financing the training of mercenaries deployed to Libya by Iran and Turkey, Doha is responsible for spreading misinformation and dangerous propaganda in its widely circulated state-sanctioned textbooks. Despite Qatar’s formal diplomatic position with Israel and the United States, its textbooks celebrate Hamas rocket attacks targeting civilians and eradicating Israeli from maps. Doha also is the source for the large finances Turkey needs to fund its interference.

These foreign actors have been largely excluded from the cooperative axis established in the region in recent months, including the Gulf Cooperation Council and the Abraham Accords. For years, Qatar was isolated from its Gulf neighbors due to its unremitting support for Iran and the Muslim Brotherhood. Although Qatar was welcomed back into the Gulf Cooperation Council in early 2021, regional clout in the Middle East has shifted following the inauguration of U.S. President Joe Biden. The Biden administration has prioritized a recalibration of ties with Saudi Arabia and Iran, distancing itself from the former and trying to reach a nuclear agreement with the latter. Qatar and Turkey could be hedging their bets by warming up to Iran’s ambitions as it appears Tehran has achieved major leverage in the region.